In the first semester of 2015, ESSP, the EGNOS service provider, deployed EGNOS System Release (ESR) v2.4.1M. This was a major achievement. ESR v2.4.1M SiS was broadcast on the 30th June for the first time in a seamless manner from an EGNOS user point of view. This new ESR was the last step before declaration of EGNOS SoL LPV200 service level on the 22nd September 2015 which was officially announced on the EGNOS Workshop in Copenhagen on the 29th September. For the first time, CAT-I service level based on SBAS in Europe is achieved.

LPV200 service brings improvement in the existing Air Navigation capacities and infrastructure in Europe enabling the implementation of the PBN concept in Europe within the Single European Sky and the ICAO Global Air Navigation Plan. The use of the LPV200 service based approach procedures allows performing the final descent from FAF to DA/H in the same manner as for current LPV with the only exception, as indicated, that the DH can be as low as 200 ft. above the runway threshold.

It is to be underlined the promulgation of RNP APCH down to LPV minima as low as 200 ft. does not represent any change in the way these approach procedures are currently flown or implemented. Aircrafts already equipped with EGNOS need neither to upgrade avionics nor to approve for additional airworthiness unless otherwise specified in the Aircraft Flight Manual. Crews do not require additional training or license to perform LPV200 operations.

Besides increasing safety in RNP APCH, LPV200 service reduces the environmental impact thanks to time and fuel savings and improves significantly the ATM flexibility and capacity. Savings in maintenance costs associated with ground-based conventional navigation aids are also noticeable.

LPV200 service level is described in the EGNOS SoL Service Definition Document [1] includes the availability and continuity commitment maps which represent the minimum level of performances the user can expect under specific conditions. ESSP elaborates SDD availability and continuity commitment maps based on ICAO requirements (Table 1) for RNP approaches to LPV minima equal to 200ft., as defined in [2] for SBAS.

LPV200 Horizontal Alert Limit (HAL) is 40m and Vertical Alert Limit (VAL) is 35m. LPV200 requirements relative to the maximum VNSE probability are novel with respect to APV-I and whenever the instantaneous VNSE exceeds the 10m threshold in nominal conditions it is said that an Accuracy Major Event (AME) happens.

The inclusion of new LPV200 requirements for the accuracy tails in [2] requests a new statistical characterization of VNSE accuracy distribution tails in line with AME occurrences. Monitoring of AME and the corresponding VNSE accuracy tails requires the development of a new methodology and new tools for performance assessment.

The EGNOS SoL SDD [1] is published by European GNSS Agency (GSA) and presents the minimum performance characteristics of the EGNOS SoL Service offered by the version of EGNOS currently in operation. Three service levels are described in [1]: NPA, APV-I and LPV200.

ESSP is in charge of the elaboration of [1] availability and continuity commitment maps. Availability commitment maps show the percentage of time EGNOS protection levels are bounded by the alarm limits for the different operations (HPL<40m and VPL<50m for APV-I and HPL<40m and VPL<35m for LPV200). Continuity commitment maps show the probability of EGNOS protection levels remaining below the corresponding alarm limits for APV-I and LPV200 during the approach. These maps represent the minimum level of performances the user can expect under specific conditions. These conditions refer to both the internal status of the system, essentially EGNOS RIMS and GEO satellites, and external conditions such as number of GPS satellites in the constellation or environmental conditions which might include severe ionospheric activity. Under such high ionospheric activity or geomagnetic storm periods caused by sudden eruptions of the Sun, SBAS systems (including ground ranging stations and processing facilities) can experience residual ionospheric effects owing to increased ionospheric variability impossible to be effectively modelled and corrected, which can reduce navigation performance at the user level.

Following results correspond to the LPV200 performance from the 22nd of September 2015, date of LPV200 service level declaration, to the 31st of March 2016. During this period, EGNOS broadcast the operational SIS through GEOs PRN120 and PRN136, using 39 RIMS for monitoring around 30 GPS satellites. Detailed information such as LPV200 Availability and Continuity, LPV200 User domain Integrity, LPV200 Horizontal and Vertical Accuracy (95%) and LPV200 Vertical Accuracy tails can be found in the EGNOS User Support Website [3].

ESSP monitoring of LPV200 availability and continuity results uses fault-free techniques, what make them independent of the data obtained in a receiver and therefore unaffected by local effects such as multipath and receiver noise and failures. This characteristic enables the computation of results in a grid of 1×1 degrees at any location of the EGNOS service area using consolidated data, including remote or even oceanic areas in which no receivers are available and locations in which a detailed monitoring is needed, i.e. airports with SBAS procedures approved or under validation. 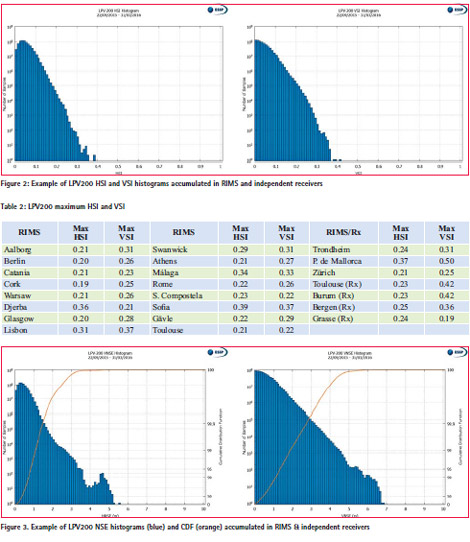 Figure 2 provides the histogram for Horizontal Safety Index (HSI) and Vertical Safety Index (VSI) when accumulating measurements from the 19 RIMS and 4 receivers within the LPV200 commitment area over the period. These histograms were calculated considering the samples in which LPV200 was available:

The maximum safety index at the RIMS sites and independent receivers (Rx), over the whole period, is included in Table 2, both horizontal and vertical; note the maximum value is 0.50, which means a large integrity margin.

The VNSE histograms and Cumulative Density Function (CDF) for 19 RIMS and 4 receivers within the LPV200 commitment area are presented in Figure 3:

The LPV200 Accuracy 95% values at the RIMS sites, when the LPV200 service is available (HPL<40m and VPL<35m), are included in Table 3. For every station the obtained performance is well below the corresponding requirement (16m for the horizontal case and 4m for the vertical one).

Values show EGNOS compliance to HNSE 95% and VNSE 95% requirements with a very comfortable margin during the period of analysis.

Computation of the accuracy tails: the LACTA tool

ESR 2.4.1M deployment and qualification for LPV200 allowed declaration of the LPV200 service level the 22nd September 2015. For the first time, EGNOS faces LPV200 stringent requirements on the accuracy distribution tail of the user vertical position error (VNSE). Performance monitoring of this requirement is challenging since it would need more than several decades of data per receiver to get a value at the requested confidence levels. It is, then, necessary to explore alternative verification approaches.

Based on [4] methodology, ESSP developed and validated a tool called LACTA (Lpv200 ACcuracy TAils) to analyze the tails of the accuracy distributions. LACTA uses real data from EGNOS receivers (i.e. RIMS) for a given period (typically several months) to estimate the probability of having vertical errors higher than 10 meters. ESSP accuracy monitoring is based on 1Hz daily data analysis of RIMS/receivers raw data for both operational GEOs. This requires a huge daily storage capacity for processed data only for accuracy. This need is independent from legal recording. 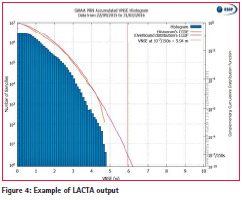 LACTA was run for the period of analysis from the 22nd September 2015 to the 31st March 2016 for all 19 RIMS and 4 independent receivers within the LPV200 commitment map. According to [4], VNSE values are filtered to remove data affected by quality issues such as local effects or receiver malfunctioning.

Extrapolated VNSE is calculated to the 10-7/150s probability even though LPV200 accuracy tail requirement is twofold (nominal operational conditions and degraded conditions) because data classification into one of these categories is not straightforward. The analysis performed assumes all the data in the period is subjected to the more stringent requirement which is the Pr(VNSE<10m)<10-7/150s for nominal operational conditions. It is only in case the extrapolated VNSE to the 10-7/150s exceeds the 10m nominal conditions requirement when a specific assessment determines if the samples leading to the non-compliance result could be considered within degraded conditions.

Figure 5 and Figure 6 present the Complementary Cumulative Density Function (CCDF) of the extrapolated EGNOS vertical accuracy (VNSE) to the 10-7/150s in RIMS using LACTA. Results are the combination of both operational EGNOS GEOs (PRN 120 and PRN 136). 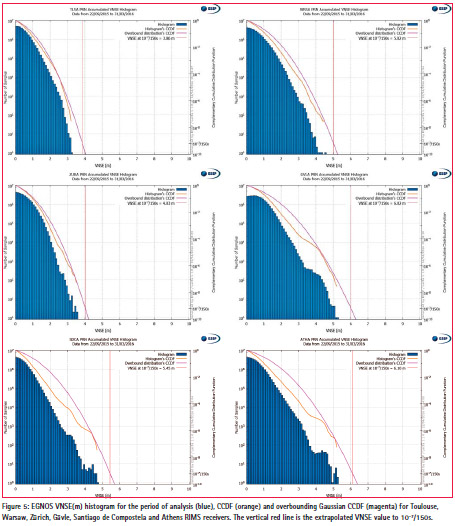 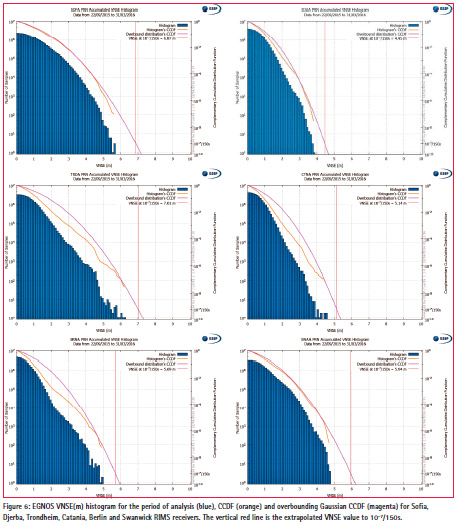 ESSP performs a thorough analysis of receivers to identify and characterize EGNOS performance in these sites. Extensive work is daily performed by RIMS and performance experts to detect possible local causes of degradations like local L1 interferences, multipath, issues in the GPS constellation and high ionospheric activity.

All VNSE extrapolated values in the RIMS meet the 10-7/150s requirement with a very wide margin. RIMS located in center of ECAC tend to provide better values whereas those in the north normally present higher values traced to ionospheric activity. 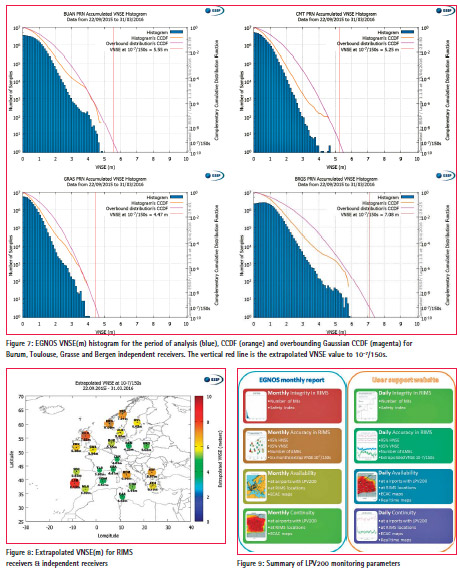 Figure 8 shows RIMS and independent receiver locations. Size and color of circles indicate the extrapolated VNSE calculated. All of them are below 10m and therefore meeting the 10-7/150s requirement.

The extrapolated VNSE to 10-7/150s is reported every six months (January and July) in the EGNOS Monthly report for each RIMS stations within the LPV200 commitment area.

LPV200 performance available to the users

ESSP is committed to a full reporting of LPV200 service level available through the EGNOS user support website [3] and the Monthly Performance Report [5]. Figure 9 provides a summary of the information available, the period of reporting and where can be found:

This information is available in the EGNOS User Support Website [3] and Monthly Performance reports [5]. Besides EGNOS Helpdesk is available 24/7 to answer queries from EGNOS users.

In the first semester 2015, the EGNOS service provider, ESSP, deployed EGNOS System Release (ESR) v2.4.1M. This new ESR was the last step before declaration of EGNOS SoL LPV200 service level on the 22nd September 2015. For the first time, an equivalent CAT-I service based on SBAS in Europe is achieved. LPV200 service brings improvement in the existing Air Navigation capacities and infrastructure in Europe enabling the implementation of the PBN concept in Europe within the Single European Sky and the ICAO Global Air Navigation Plan.

LPV200 service level is described in the EGNOS SoL Service Definition Document [1] and includes the availability and continuity commitment maps which represent the minimum level of performances the user can expect under specific conditions. ESSP elaborates SDD availability and continuity commitment maps based on ICAO requirements for RNP approaches to LPV minima equal to 200ft.

This paper has presented EGNOS performance from the 22nd of September 2015 to the 31st of March 2016. The period showed excellent coverage of availability and continuity in most of the ECAC. LPV200 integrity enjoyed large margins through the period, 95% horizontal and vertical accuracy is well within the requirements for both RIMS and independent receivers.

The inclusion of new LPV200 requirements for the accuracy tails in [2] requested a new statistical characterization of VNSE accuracy distribution tails. Therefore, ESSP developed and validated a tool called LACTA. Results for the period showed extrapolated VNSE maximum values at around 8m well within the requirement. The analysis performed assumes all the data in the period is subjected to the more stringent requirement which is the Pr(VNSE<10m)<10-7/150s for nominal operational conditions. Results are available at the EGNOS User Support Website [3] and Monthly Performance reports [5].