Precision analysis of IGS long baseline Processing based on GAMIT/GLOBK

After years of development, as the representative of GNSS, GPS technology has been gradually replacing the conventional triangulation techniques and has become the main means of access to ground control point coordinates. From the initial decimeter magnitude to the current sub-centimeter or even millimeter level, the coordinate precision of ground points has been highly improved upon[1]. However, baseline solution software accompanied with a receiver, for various reasons, has been increasingly unable to meet the high precision of the data processing requirements. In recent years, with the introduction of GAMIT/ GLOBK, Bernese, GIPSY and other scientific GPS data processing software, the level of GPS data processing improved quickly, especially with the introduction of GAMIT/GLOBK software to the ‘National GPS network of China’ and the ‘China Crustal Movement Observation Network’, and successfully applied to obtain a large number of high-precision results.

The various high precision GNSS data processing software above are GAMIT/ GLOBK, Bernese, GIPSY and PANDA. Bernese and PANDA were developed by the University of Bern in Switzerland and Wuhan University in China, thus they are not free of charge and the code of the software is not publicly available. The GIPSY software with a strong military background is not easy to obtain, and only GAMIT/GLOBK is a free software that can be obtained from public sources.

GAMIT software was originally developed by Massachusetts Institute of Technology, after the United States SCRIPPS Institute of Oceanography to develop improvements together [2]. GAMIT software continued to release an updated version; the latest version being GAMIT10.4. GAMIT software is one of the best GPS positioning orbit software in the world; and using double-difference model, when using the precise ephemeris and precision starting point, the relative accuracy of long baseline can reach 10-9, the accuracy of short baseline is better than 1 mm [3]. GAMIT is characterized by its high operation speed, short update cycle and higher degree of automation in accuracy within the permitted range. As a result, the application of the software is quite extensive.

The GAMIT software is composed of many different function modules which can be run independently. Their functions can be divided into two parts – data preparation and data processing. In addition, the software also comes with a powerful SHELL program.

The ideological core of the surveying adjustment software GLOBK is the Kalman filter; its main purpose is to deal with the integrated and multivariate measure data. The main input of the software is h-file and the approximate coordinates, which have been treated by GAMIT [4]. Of course, it has been successfully applied to process the integration data of other GPS software (e.g., Bernese and GIPSY) produced and other geodetic observations, including SLR data.

The main output of GLOBK is time series of station coordinates, the average coordinates of the station, station speed and multi-period orbit parameters[4]. GLOBK can effectively test the effects of different constraints on the adjustment results. Singleperiod analysis uses very loose constraints; therefore the parameter constraints can be enhanced directly in GLOBK.

The following section of this article briefly describes the role of the main modules of the GAMIT software and the function of each module. Later, in the core part of the paper, we provide a detailed statement of the data processing step of GAMIT software, which gives the results compared with Bernese software, and draw the appropriate conclusions. 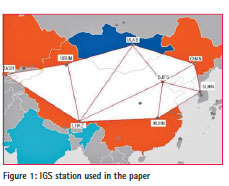 The main module of GAMIT

Instructions of data processing of GAMIT

Data preparation Prepare project file The data processing, using a total of eight IGS stations were bjfs, chan, lhaz, urum, wuhn, suwn, tash, ulab, which are depicted in Figure 1. The data used is in 2013’s annual day of 67, a total of 1 day. Post-processing precise ephemeris SP3 of IGS is used.

First of all, create a new folder named 2013 under the main project directory file, and then create new files respectively named brdc, igs, rinex and 067. 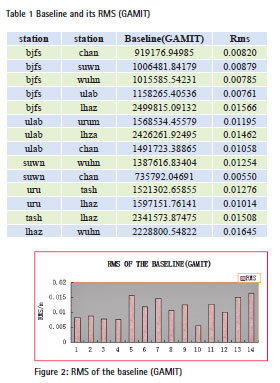 The updates of Tables can be downloaded from ftp://garner.ucsd. edu/archive/garner/gamit/tables/; or http://sopac.ucsd.edu/processing/gamit/ to update the file you may need.

Files need to be updated everyday, which include Earth rotation parameters ut1 and pole (the command sh_get_orbits used to download IGS files. The two files will automatically be downloaded). Files need to be updated annually, including nutation table nutabl., Sun table soltal., Moon table luntab and leap seconds table leap.sec. When a new receiver or antenna is added, it needs to be updated rcvant. dat; and the new satellite launched needs updating svnav.dat. The encoded file dcb. dat needs updating on a monthly basis.

Since sopac and cddis server cannot log on with a blank password, and the ftp information in ftp_info recorded in the tables file of GAMIT (gg> tables> ftp_info), password and wpassword are empty, and therefore need to be modified, they will have to modify their password as a valid e-mail address, shenying1215@126. com. 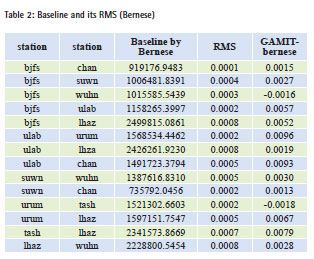 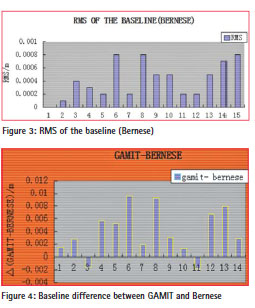 After the password has been modified, you can download the data. It can be manually downloaded; or use the command to download it, and the procedure is as follows:

Observation files of IGS stations can be downloaded in the first step. The process – type command (code: cd 2013/rinex) in the terminal then slip into the rinex directory. Download rinex observation files, command is as follows: sh_get_rinex -archive cddis -yr 2013 -doy 67 -ndays 1 -sites bjfs chan lhaz urum wuhn suwn tash ulab; the program of GAMIT will be automatically downloaded and unzipped to get an observation o-file. If the internet speed is poor, you can add -ftp_ prog wget after the above command. If the downloaded file is a d-file (compressed rinex observation files), you can use the command crx2rnx to convert it into an o-file (sh_crx2rnx –c n –d y – f *. Z or crx2rnx *. 13d). 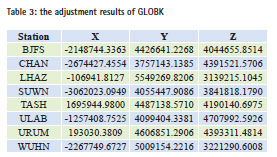 Connect tables to the project directory

• Other documents Under normal circumstances, the control file of data process process.defaults, station lists file sites. defaults, solver control file sestbl., Precision control file sittbl. All can keep the default values, based on the main purpose of the calculation and then take the specific modifications. The data for the baseline solution, sestbl., has been set to Choice of Experiment = BASELINE. Data processing does not consider the impact of ocean tides; ocean tides model file otl.grid can be disabled. Need to set sestbl file for: Tides applied = 23; Use otl.grid = N;

After all the preparation of documents to be produced are ready, copy station.info and lfile. file to tables file (2013>tables) in the project folder 2013. 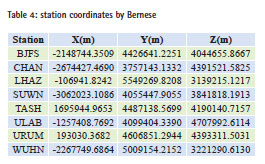 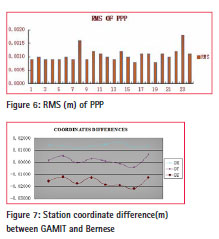 To test the validity of the results, Bernese software is used to process the same station, and compare the two results.

GLOBK (Global Kalman Filter) is a Kalman filter, which can be combined to solver space geodesy and ground observation data. The data for processing is valuation of the ‘quasi-observation’ and its covariance matrix, ‘quasi-observation’ means station coordinates obtained from the original observations, i.e., Earth rotation parameters, orbital parameters and target location and other information.

Adjustment of the GLOBK needs a two-step process, the first step is to convert the text h-file of GAMIT treatment resulting to binary H-file, which would be, copy the h-file in the session folder (067) to glbf folder, then enter glbf folder, run the command htoglb / tables/ expt.svs h*; you can get H-file. Then use the command ls *.glx>expt. gdl to get a gdl-file for GLOBK to get the right path when processing documents.

The second step, prepare process control documents GLOBK_comb.cmd and glorg_comb.cmd according to the GAMIT manual (Reference GLOBK manual, a detailed description of these two files for each constraint). These two documents will be placed into gsoln folder, and finally run the command in the project folder 2013: sh_glred -s 2013 067 2013 067 -expt expt -opt E G H, you can get a GLOBK_ comb.org file, the adjustment results (WGS84 coordinates ) is saved in this file.

Particular attention: If error of the approximate coordinates in the lfile more than 10 m, during the Kalman filter processing, GLOBK program will automatically delete the station in which errors overrun (three times in error), and the coordinate of that station will be 0. The results were compared with the Bernese precise point positioning (PPP) results. All stations adjustment results are mentioned in Table 3. According to Figure 7, we can be sure that the station coordinates process results by GAMIT consistent with BERNESE within 1 to 2 cm. The results showed that the GAMIT software is suitable for handling long baseline and the results are reliable [6].

The results of the experiment show that the precision of inner coincidence of baseline solution by GAMIT can reach centimeter level. Compared with the Bernese software, the difference in baseline is about millimeter, difference of coordinate component is about 1-2 cm, and the precision is quite high. The experiments were selected long baseline, indicating that GAMIT has a great capability in processing baseline, and the performance of the software is reliable.

This research was funded by National Natural Science Foundation of China (No. 41374012) and the 2012 undergraduate comprehensive reform and teaching research project of School of Geodesy and Geomatics, Wuhan University (201220).