PPP: the way ahead for solving land tenure issues and contribute to sustainable development?

For over 20 years, governments in developing and developed countries have invested worldwide on improving the certainty of rights, restrictions and responsibilities by implementing land tenure reform projects. Traditionally efforts have been focused primarily on digitalization of land right registry and cadastre systems and – more recently – spatial planning and natural resources systems. Most of the investments are focused on large scale systematic registration activities aimed at improving coverage, building information technology (IT) systems, reviewing and reforming institutions, technical capacity building and improving the regulatory framework.

There is an increasing trend across most developed and developing countries to involve the private sector in the delivery of land cadastre and registration services. This trend follows significant results in the infrastructure sector (in areas such as ports, roads and hospitals) where many developed and developing countries have leveraged new investment by making the private sector and active partner that takes risks, invest resources and achieve social results under what is known as a public-private partnership (PPP) model.

Results from other sectors have demonstrated that under a PPP arrangement, better financial options and distribution of risks could be achieved. However, we have also learnt that PPPs need to be well designed to achieve valuefor- money for society as the private sector always would expert revenue out of a PPP.

Learning from experiences as the supervisor of a large e-governance PPP in Colombia; as financial analyst and designer of a PPP proposal in Africa and after supporting the policy efforts of the World Bank in the field; I have clear in my mind that land PPPs are not a silver bullet to solve current funding challenges and lack of innovation many countries around the world are facing in their cadastre and land management systems.

Are PPP part of the future? Yes, with no doubts as we already have seen is happening for over 20 years in Canada and it is significantly used today in Australia, the country with probably the best cadastre and land titling system in the World.

So, in a future in where PPPs are broadly used in the land administration sector, how we ensure these projects are not just profitable for the private sector but primarily support the achievement of the United Nations Sustainable Development Goals (SDGs)?

In this article, I propose strategies for practitioners to involve the private sector in land administration services while at the same time ensuring there is a contribution to the achievement of the SDGs. Many of these strategies I have writtenS them after understanding what has worked well (like in Switzerland) and what lessons we have learnt from challenging land PPPS (like in the Philippines). Although most of the strategies focus on helping the government design good land PPPs. However, the private sector interested in be an active part of these coming opportunities, will benefit from these strategies when bidding or submitting an unsolicited proposal.

Strategy 1: Use what has proven to work

Multiple studies have reviewed approaches conducted in developed and developing studies. However, after over 30 years of investment in developing countries land administration systems, it is difficult to identify approaches that are likely to work in all context.

In any case, there are some general views in the international community of crucial principles most land reform projects should follow to be successful and contribute to sustainable development. Acknowledging this space is always changing; the following list presents some principles today for land reform projects that are considered to be in line with the private participation focus of land PPPs:

• Fit-for-purpose: improve land tenure rights by fostering innovation in approaches and new technologies in land administration with the objective of optimising resources by investing in the collection and processing of land information in a way that best fits the specific conditions

• Community mapping and crowdsourcing methodologies: the use of technologies and methods, particularly portable devices and open public participation, to collect information with the community as an active participating party with roles and responsibilities

Strategy 2: Involve the private sector in the area where it can best perform

Based on the cases in Switzerland and Australia in where the private participation is segmented to where it best suits the local and national needs, land reform project designers should consider involving the private sector only in segments or areas where it can better help the government in achieving SDGs. These areas of segmentation could be either geographical or institutional. In Switzerland, the roles of surveyors vary depending on the canton while in Australia (both in NSW and Victoria) the privatisation occurred on the land registry and not the cadastre. When doing this segmentation, project designers could better identify if which of the related SDGs could be better addressed. In many cases, crosssubsidies in the form of packages in the land PPP where highly profitable areas are bounded with those that might not raise revenue but could table better gender equality (SDG5) and title for the poor (SDG1).

One of the most significant advantages of the Karnataka in India is the delegation of multiple land administration services into one PPP. Designing cross-service approaches in land PPP and other projects could better allow supporting the achievement of SDGs. In particular, joining the land tax collection service with land registry and cadastre services opens the opportunity for the private operator to invest in low-income areas (SDG1) with the prospectus of generating wealth in the long term and improve tax collection. Similarly, like in Karnataka, titling activities could be directly related to other fees such as crop registration, building and development permits and forest licenses, creating additional sources of income to expand land tenure systems.

Strategy 4: Work with the trusted part of the private sector

Success in Switzerland of its delegation of cadastre services to the private sector is underpinned by the trust that exists on the surveyor’s registration system. Similarly, privatisations in Australia are considering very successful from a financial point of view because the government has created mechanisms to trust private investment banks and pension funds as owners of land administration services.

Therefore, project designer should consider delegating the land administration services on those segments of the private sector that are well trusted by society. In some cases, it might be the financial sector, the insurance sector, certain professions (lawyers, surveyors) or private associations (such as the chambers of commerce).

A key opportunity politicians have is to define the objective of a project they are willing to support which in most cases should be aligned to the SDGs.

Therefore, project designers should ensure that revenue received by the private sector is achieved when these objectives are met. The case in the Philippine demonstrates a situation where this strategy was not used and cause the opposite effect: revenue conditions limit achieving better land tenure systems.

Result-based revenue would be a particularly useful strategy for projects focusing on gender equality. For example, extra revenue could be negotiated with a private operator of a land system to those titling registration that includes women, encouraging this private operator to invest and prioritize equal land ownership in the areas covered by the project.

In conclusion, a future with many land PPP projects across the world is possible (this is the reality in many other sectors). Examples around the world where the private sector plays a significant role in running land administration systems have provided valuable lessons. Notably, all future projects need for government to have the right financial, administrative, legal and regulatory framework in place to ensure private participation under a partnership arrangement and not just transfer the problem.

I hope strategies proposed open conversations between different parties and allow to shape this land PPP trend into a future full of strong land tenure in all continents.

The 4th Joint International Symposium on Deformation Monitoring (JISDM) was held on May 15th – 17th in Athens, Greece. JISDM carries the 40 years long tradition of the FIG and IAG joint symposia in the field of deformation monitoring and more recently the active sponsorship of ISPRS. The symposium aimed to connect research in deformation measurement / techniques, analysis and interpretation with advanced practice. The School of Rural and Surveying Engineering (SRSE) of the National Technical University of Athens (NTUA) was the host institution of this event. 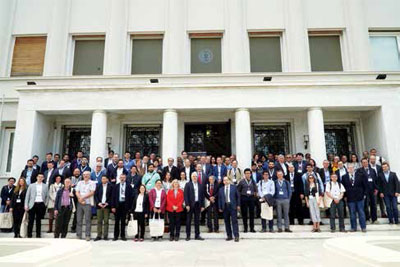