When one is very close to a thing it becomes blurred and to see it in focus one has to step back. To get a focus on the Survey and Measuring Equipment (S&ME) Industry in India we also stepped back from the humdrum and interacted with stakeholders in the industry in the latter half of 2013. We had done a similar exercise five years ago and published our findings in the article – In the line of Sight (Coordinates March 2009).

This time we probed different aspects of the S&ME Industry like the market scenario; applications; awareness about the Industry and the issues facing it; marketing and procurement strategies adopted by the Dealers and Users; after sales support; and behavior and decision parameters of the Users. Our interactions provided us with rich insights into the Industry and we present them here for our readers.

Our story has played out on a canvas which has changed quite dramatically in the past few months. The India of the present is quite different from what it was at the end of last year. The political dust that had risen in the run-up to the 2014 Parliamentary elections has finally begun to settle down. With a stable government at the helm, the immediate effect of this election result in buoying both the stock market and the Rupee can be taken as a sign of positive things to come.

In August 2013, with the rupee hitting a record low of 68.85 to a dollar and the uncertainty on the political front paralyzing all policy and decision-making; the S&ME Industry was hit hard in two areas where it is quite vulnerable. Firstly, the Industry was severely impacted by the rupee-dollar dance since it is almost entirely based on import of equipment. Secondly, being highly dependent on government projects/ clearances for large orders it was affected by the political flux preceding the elections. With both these factors now steadying out, hopefully the proverbial dark cloud has passed and the sun will once again shine on the Industry. 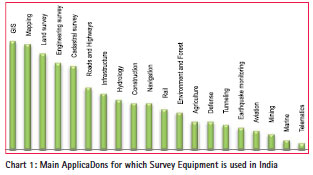 During our interactions we found that the two applications of Infrastructure and Roads and Highways lag behind the conventional applications like GIS, Mapping, Land Survey, Engineering Survey and Cadastral Survey in their use of survey equipment (Chart 1); but they now seemed to be poised to reach new heights.

The new Government, lead by the fifteenth Prime Minister of India, Narendra Modi has made a spate of announcements which could spell a bonanza for the beleaguered S&ME Industry in the country. Nitin Gadkari, the Minister for Road Transport, Highways and Shipping announced the fast tracking of about 50 stalled road projects; the Minister has also given the in-principal go-ahead for a project to interlink the Ganga, Brahmaputra, Mahanadi and Godavari rivers to create a national waterway grid. This grid too would have a road network to link the river ports. Venkaiah Naidu, the Minister for Urban Development and Housing and Poverty Alleviation has announced the prioritization of infrastructure development of satellite towns and linking of twin cities across the country by his Ministry; besides aiming for ‘housing for all by 2010’. These are just a few examples of mega infrastructure projects which are in the pipeline.

Use of survey and measuring equipment is also gaining momentum in application areas like mining. With new mining guidelines on the anvil, use of technology is likely to get a boost; while programs like the Geological Survey of India’s (GSI) National Geomorphological and Lineament Mapping, Hyperspectral Mapping, National Aeromagnetic Mapping, National Geochemical Mapping and Geophysical Mapping have already been initiated.

One other application where survey and measuring technology could have far reaching consequences in the country is Agriculture. Different studies have established that leveling of a field through laser leveling helps to save water and improve yield besides giving other benefits. Leveling also opens up the option of precision farming – the potential of this technology in India could be phenomenal given the country’s largely agrarian base.

As has already been mentioned, most survey related equipment vended and used in India is imported into the country. With a high import duty and the vulnerability of the rupee in the backdrop, it did not come as a surprise when a majority of the respondents we interacted with, listed lowering of import duty as the priority measure needed for the growth of the industry (Chart 2).

Given that licensing in India, whether related to the use of certain GNSS equipment or to permissions for aerial/ land mapping/surveying, has remained a bone of contention for all stakeholders in the Industry; easing of licensing has been listed as the second priority measure.

The issue of trained manpower continues to haunt the industry. The responses from five years ago are echoed in the responses this time too. Everyone agrees there is a shortfall and urgent measures are needed by all the stake holders, whether in the Government, Private or Academic sector to correct the situation. However the ground reality continues to show that skilled manpower capable of using survey equipment and utilizing the technology in various applications is still in extremely short supply.

One other factor that seems to pinch the industry is the lack of an indigenous product to match the quality of the imported products. The general perception among the stakeholders is that if such a product or products were available the dependence on imports would be reduced. However, Indian survey equipment manufacturing is missing from the global digital equipment competition map. During the discussion on import duty and indigenous products an interesting observation was made; in the absence of an Indian product or indigenous digital survey manufacturing industry worth mentioning what was it that was being protected by the high import duty on the products being brought into the country? Logically it would make sense to reduce the import duty on the survey and measuring equipment to allow the industry to grow.

Collectively the industry maintains that Quality is the most important guiding factor while selling or buying a product while Price is least important (Chart 3); the Users also placed Project Need and New Technology ahead of Fund Availability as the driving force to buy products (Chart 4) – thus bringing the quality-price debate to the fore once again.

The Indian market is considered to be extremely price sensitive as a general rule, could this be changing? For the moment the quality and price debate seems to be quite inconclusive because no generalization can be made at least as far as the S&ME Industry goes. A User segment has emerged which is extremely conscious of quality but one cannot deny the co-existence of another segment of Users who are guided by price. Another direction in which the qualityprice debate has moved is After Sales Service which seems to have made a big impact on the psyche of both the Dealers and the Users. The quality and price of servicing is seen as the crucial tipping factor today and with other things being equal; the competition has jumped to the next level – that of providing maintenance and servicing facilities

An aware and educated User is the sign of a maturing industry. Analyzing the User opinions about various aspects of a product (Chart 5) gives an insight into the factors that guide the Indian User of survey and measuring equipment.

Five years ago we had a two-dimensional picture of the industry through the eyes of the Dealers and Users. This time around we discovered a third dimension – that of Rental Organizations. These organizations provide survey equipment on rental basis along with trained personnel if required; this enables their clients to avoid investing in equipment or manpower and also takes away the headache of maintenance since all of these are undertaken by the rental company. It will be interesting to see whether this dimension is able to gain momentum and establish itself. 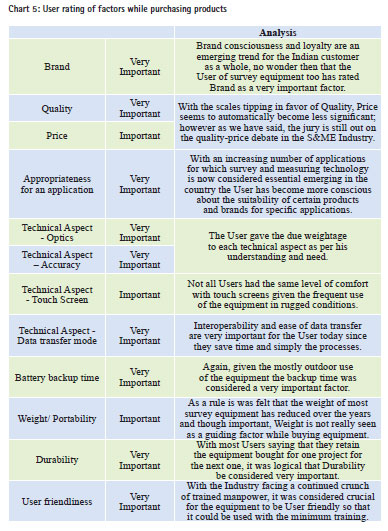 Survey and mapping have a rich tradition in the country with Survey of India being the oldest scientific department of the Government. Carrying the torch into the 21st century are missions like the GPS-Aided Geo Augmented Navigation (GAGAN) and the Indian Regional Navigation Satellite System (IRNSS). GAGAN, the Satellite Based Augmentation System (SBAS) became operational in February 2014. While in April 2014 the Indian Space Research Organization (ISRO) announced the successful launch of the second satellite in the IRNSS group – IRNSS-IB.

All respondents we interacted with opined that the S&ME Industry will see a good growth in the coming years (Chart 6); when the survey was conducted at the end of 2013 this had seemed like wishful thinking but today in 2014 with the winds of change in the air this seems viable.