Performance analysis of position estimation based on laser scanner and SLAM

In areas such as the environment of the city, for reasons such as multipath and GPS signal blocking, accurate position estimation is difficult only GPS system. The study such as GPS/INS, GPS/DR has been performed. Location estimation technique that combines vehiclemounted sensors, camera, laser scanners have been studied here. Especially in recent years, studies for improving the position and attitude estimation performance of the robot and the car with a laser scanner is performed[1-3]. More recently, studies using the Velodyne(3D laser scanner) is a new research [4].

The experimental situation, in an environment where you placed the cylindrical obstacle of about 70cm diameter and obstruction of conical shape of about 30cm in diameter, was set up to run the dot of the speci ed path the vehicle. Figure 1 shows an arrangement of obstacles for the experiment.

In Figure 1, Red stars are obstacles, starting from (0,0), unmanned ground vehicle is traveling between the obstacles in a counter-clockwise direction. 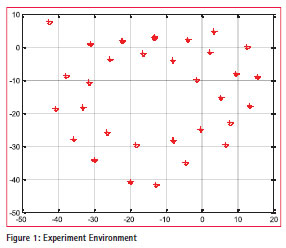 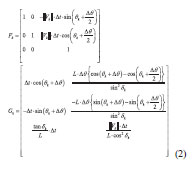 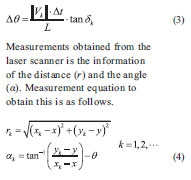 Where, n is the number of measurements and θ is a current heading angle of the vehicle. Observation matrix for this is as follows. 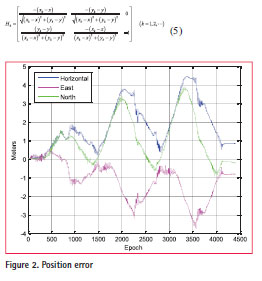 In this paper, we performed an experiment of position and attitude estimation of the vehicle with a laser scanner. At the experiment results, very reliable result was obtained in a short interval. In the future, Study about sensor fusion with GPS, IMU and Vehicle mounted sensors must be carried out for performance advance.

This work was supported by a grant from Korea Research Council of Fundamental Science & Technology funded by Ministry of Education, Science and Technology in 2013 [Project : A Study on Satellite based Position Tracking Technology for Calamity Prevention and Public Safety Improvement]. 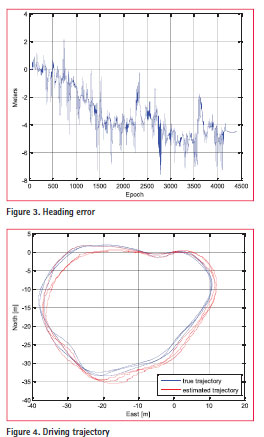