Personal navigation technologies have been evolving rapidly because of the increasing popularity of smartphones and portable devices in recent years. These devices have changed the developmental trend for indoor pedestrian navigation. However, some considerations restrict the cost, accuracy and practicality of related applications, especially in indoor environment without the support from Global Navigation Satellite System (GNSS).

This study uses the indoor control point as the update measurement in the extended Kalman Filter (EKF) to aid the Inertial Navigation System (INS) without GNSS. The walking velocity from a pedometer and step length model is applied as the constraint of moving direction in EKF. Moreover, the real-time smoothing is also implemented. The performances of proposed algorithms are verified with smartphones. The preliminary results show the improvement of the INS performance in real-time for pedestrian indoor navigation significantly.

Smartphone is an ideal device as a mobile and positional pedestrian navigator because it can provide the basic information for navigation using internal sensors such as GNSS chip, inertial sensors, magnetometer, camera, Wi-fiand Bluetooth. The other reason is the high popularity of such devices over the world. These characteristics can reduce the cost of businesses for pedestrian indoor navigation products and their promotion. Moreover, crowdsourcing for massive data such as of location and user’s information facilitates the development of Location-based Services (LBS) and personal marketing.

Indoor pedestrian navigation technology has was being developed for nearly 20 years, and this has evolved in to numerous variants from its original form based on different theories and equipment [1-4]. The crucial issues are how to achieve the necessary accuracy without GNSS, as well as to overcome human motion.

The Pedestrian Dead Reckoning (PDR) estimates two-dimensional position by using a pedometer and heading sensor. The impact of gravity projection on horizontal components in INS is eliminated in PDR because of the non-integral calculation. However, the PDR cannot provide height information without a barometer, and its orientation accuracy is similar to INS that is restricted by the performance of a gyro or magnetometer. Furthermore, step length models generally use empirical formula which is incapable to perfectly fit individual characteristics. The step length can vary by as much as 40% among different pedestrians, even when they are walking at the same speed, and by up to 50% across the range of walking speeds of an individual [2].Tuning parameters or step length calibration can enhance the accuracy in post-processing but inconvenient for real-time application. In addition, the demonstration systems may have better performance than a production system because of the uncertainty of the coefficients [5]. Therefore, the PDR system is likely to require occasional position corrections from an external (absolute) positioning system to maintain stable performance [2],which is similar to INS. 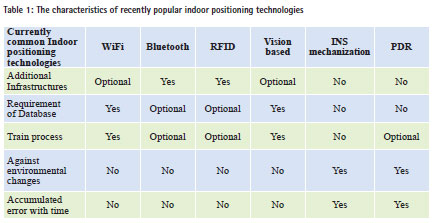 INS is usually integrated with the GNSS that utilizes the mechanization equations to estimate the position and orientation for seamless vehicle navigation in the GNSS-hostile environment. The pedestrian navigation error will rapidly drift because of the vibration and dynamic misalignment between body frame and pedestrian frame after the integration process, especially with the use of lowgrade sensors. However, INS allows the change of environment and it doesn’t require the database, training process and additional infrastructures. INS provides the continuously real threedimension solution of position and altitude without the need of a barometer. Table 1 shows the characteristics and requirements of recently mainstream indoor positioning technologies. The additional infrastructures refer to the need of equipment such as wireless access point, transmitter and receiver.

The integration of different methods would be a better solution with the higher costperformance ratio for practical real-time applications. EKF is often used in multisensor fusion [6, 7]. The estimated state feedback to the INS mechanization after the measurement update compensates the errors, as well as replaces the previous state. Generally, the sensor errors are supposed to be determined in the laboratory [11]. However, these inertial sensors require the online calibration because of their low stabilities. The proposed system includes EKF, Walking Velocity Constraint (WVC), control point update and real-time smoothing as shown in Figure1. The GNSS measurement is only used for initial alignment. In general, the loosely couple is an ideal form to aiding in the INS mechanization by integrating the position or orientation, so the control points use the format of longitude, latitude, and height with available accuracy and the same coordinate system. The control points are surveyed by Total Station and broadcast by beacons. 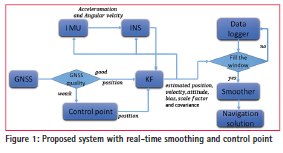 The Non-holonomic Constraint (NHC) and Zero Velocity Update (ZUPT) are commonly used for INS/GNSS integrated systems for vehicle applications in the GNSS-hostile environment [8]. However, the smartphone is held in the hand, making it difficult to sense the stance phase of every stride rather than the shoe-mounted IMU in this study. Thus, the ZUPT was implemented when the user was standing on the control points. The NHC requires more stringent conditions for pedestrians because human motion has undesirable lateral and vertical movements as well as no constraint in moving direction. However, the integration of INS and PDR can improve the accuracy of INS pedestrian navigation, which was proposed in [5]. Thus, this study uses the walking velocity from a pedometer and step length model to constrain the velocity of moving direction in the EKF. The step length model used in this study is reference to [12], which considers more individual parameters.

The fix-interval smoother called Rauch- Tung-Striebel (RTS), was implemented in real-time by setting windows. The smoother estimates the optimal states by combining the forward and backward solutions of EKF [6]. The real-time smoothing for the INS/GNSS integration system and land-based vehicles was proposed in [9]. The concept used in this study is different from the reference which activated smoothing after filtering part of the data by setting windows rather than updating measurements at random are found. The major reason is that the error of pedestrian navigation will accumulate quickly without smoothing and the frequency of control point is not fixed like 1Hz of GNSS. Figure 2 illustrates the feasibility of real-time smoothing during the operation. The remaining time between filtering the k and k+1 epoch is more sufficient to implement smoothing because the sampling rate of a smartphone for pedestrian navigation is usually set at 15~17 Hz.

The iPhone 5S and Samsung S5 are used as the experimental smartphones, but they are separated into two scenarios as shown in Figure 3. The calibration reports of two smartphones can be referred to in the previous research [11]. The reference trajectories are provided by a commercial Micro Electro Mechanical Systems (MEMS) IMU MIDG-II and processed with the smoothing, NHC and ZUPT in post-processing. The specifications of this IMU are shown in Table 2. The experiments of smartphone and MIDG-II are conducted simultaneously on a common carrier to ensure that they capture the same trajectory and human motion. There are four control points chosen at special locations, such as the corner and the end of the corridor which update seven times during the experiments. In addition, the smartphone has inaccurate time label and sampling rate that cause a time synchronization problem between two sensors. So the analysis of orientation error cannot indicate the performance of the proposed system. 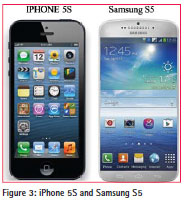 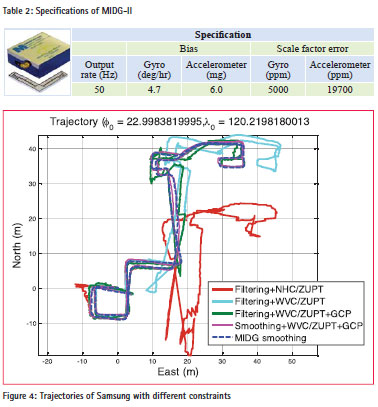 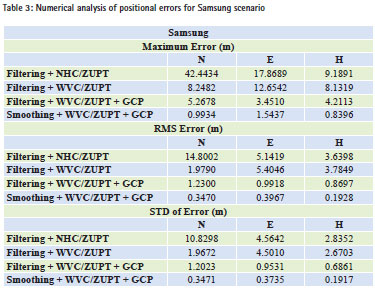 Figures 4 and 5 show the filtering trajectories of two smartphones with different constraint algorithms. The GCP signifies control point update in the following figures. Tables 3 and 4 show the numerical analyses of their positional errors. The results show that the WVC significantly improved positional accuracy of filtering solution in real-time. Furthermore, the control point fixes the trajectory at the correct location that reduces the remaining error to around 1 to 2 meters of RMSE. Smoothing with WVC/ZUPT and control point in post-processing provides the positional RMSE around 50 cm. 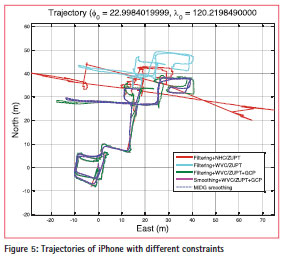 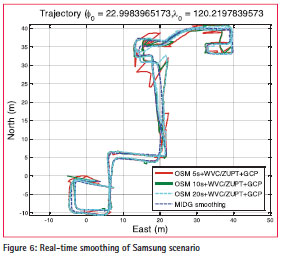 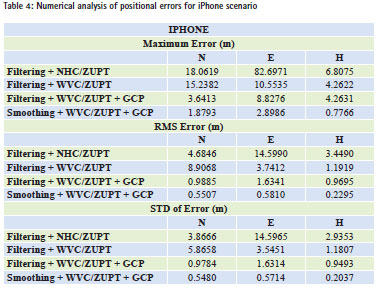 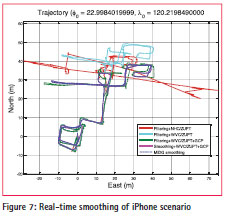 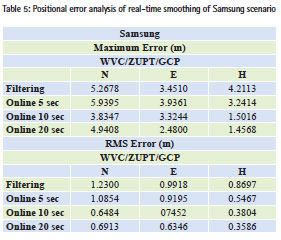 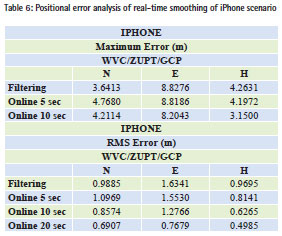 The WVC and control point significantly improve the filtering solution in real-time. The performance of real-time smoothing is verified and depends on the frequency of update measurement to provide the best performance in real-time or near real-time. The control point used in the proposed architecture can be replaced by other positioning technologies with the precondition of available accuracy. This integrated architecture has better accuracy and stability by reducing the following: 1) the required amount of control points; 2) the optimal window size of real-time smoothing, and 3) the error of WVC cause by the inaccurate step length model and pedometer. Therefore, the INS can provide the required accuracy at meter or sub-meter level with the proposed algorithms for pedestrian indoor navigation in real-time.

The author would acknowledge the financial supports provided by theInstitute for Information Industry of Taiwan (Project: A study for Spatial Image Survey and Indoor Mapping Optimal Process) and all technical assistances from his supervisor, Dr. Kai-Wei Chiang.