On the search algorithm of independent baselines

Theoretically in the simultaneous observation of the high-precision GPS network solution mode, the selection of the independent baseline vector can be arbitrary with the same adjustment. But in the real situation, the results varies in different selections for the model of baseline solution is imperfect[1]. Solving this problem requires two steps, to determine the weight of the baseline and to search for the independent baseline with the maximum weight[2]. This paper is to describe six ways used in the search algorithm of independent baselines and realizes them by C++ language, by comparing, we know Prim algorithm, Kruskal algorithm[3] and matr ix rank solution[1] are able to get the independent baseline set with maximum weight. Based on the matrix rank solution, the w eight is respectively determined by the length, prec ision and relative precision of the baseline[4], then the adjustment results are analyzed. 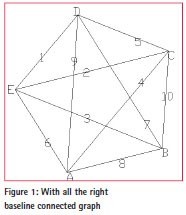 Prim algorithm is to select the side of the minimum weight with one end in the tree while the other is not in the tree and add it to the tree until n-1 sides are in the tree[5]. The realization of the process is shown in Figure 2. 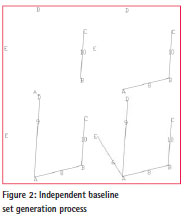 Kruskal algorithm examines each side according to the increasing order of the weight of the side. If the side and the selected ones do not constitute a loop, then reselect the baseline and repeat the process until the spanning tree appears[5]. Take Figure 1 as example, the specific process is represented by Figure 3.

Assume there is a point set Point[n], Vector V[j] represents the directing relationship between any two points, in which j=1/2[n(n-1)]. The overall idea of the matrix rank solution is to maintain a gradually increasing optimal set of independent vectors by continuously updating the correlation matrix until the completion of the search[1].

The following method is used to construct the pth row (p=3, 4, …, n-1) of the correlation matrix: 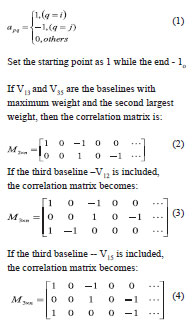 This paper introduces six kinds of algorithms and uses C + + language to program the six kinds of search algorithms, then determine the weight of the simulate GPS control network (40 sites, 780 baseline) by baseline length (the longer, the smaller) to search for the independent baseline set. Figure 4, Figure 5, Figure 6 and Table 1 is the network chart and total length of baseline with six independent baseline search methods.

The O file calculated by GAMIT is the input file. Based on the matrix rank solution, the weight is respectively determined by the length, precision and relative precision of the baseline then search for the independent baseline set in the synchronous loop. Each synchronous loop contains 12 IGS stations and 66 baselines, 11 of which are independent ones, so in the whole 5 time durations 55 independent baselines are included. The following search results are obtained respectively by the above 3 methods of weight determination. Figure 7, Figure 8 and Figure 9 are the control net figures, red line represents the repetitive baseline.

Make adjustment of the independent baseline sets processed by the three methods with COSA. Set P504, P511, OPRD and P598 as the known points. Compare the results with the 32 IGS station coordinates published by the SOPAC. As shown in figure 10, figure 11 and figure 12.

Taking the point precision in all directions as standard, the results of the second weight-determining method (by precision) are better than the other two.

This chapter first introduces six search algorithms of independent baseline in detail, namely the Ray method, the Wire method, the Prim method, the Kruskal method and the matrix rank solution, then the weight is determined by length of baseline for the following program, finally we get the conclusion that the Prim, Kruskal and the Matrix rank solution can get a independent baseline set with maximum weight. By analyzing the external and internal fit precision of three methods, we can get the following conclusions: (1) Results from the three methods vary marginally, al l at the level of mm; (2) In the real situation, the results varies in different selections for the model of baseline solution is imperfect. By analyzing the external and internal fit precision of the adjustment results, the second weight-determining method (by precision) can get a relatively better independent baseline set.

This research was funded by National Natural Science Foundation of China (No. 41374012) and the 2012 undergraduate comprehensive reform and teaching research project of School of Geodesy and Geomatics, Wuhan university (201220).

[4] Shi Chuang. On the research of process, model and software of high-precision GPS data of national GPS network[D]. Wuhan technical university of surveying and mapping.1995.