We can treat Agricultural Land Consolidation as a merging, enlargement, eliminating of mosaic land ownership and improvement of configuration as well as optimization of size of land plots in order to increase the efficiency of agricultural production via rational use of scare resources: land, labor and capital based on reduction of transaction costs.

Agricultural Land Consolidation should be carried out based on the following principles: voluntariness; openness and transparency; financial and economic feasibility; taking into account the interests of the population groups involved including women and youth as well as indigenous people; step by step implementation; consideration of local conditions; state and NGO support.

By its nature, Agricultural Land Market represents a market of imperfect competition. This is manifested in the following. The number of sellers and buyers of land plots does not match among themselves. Market information on the transactions is incomplete and non-transparent. Transactions are mostly local in nature. The supply and demand for the land plots are inelastic.

The agricultural land is the product of a special kind, the main means of production in agriculture, the cost of which may increase if the normal use for a period. The price of the land is determined based on the interaction between market regulators: land rent and interest rate. Fertility and location of the land plot as well as the additional costs of capital determine the amount of rent. With increasing size of land plots used for agricultural production, efficiency of farming is increasing due to the relative reduction of transaction costs per unit of land area. The maximum efficiency of agricultural production is achieved in the case when the level of transaction costs per unit of land is reduced to a minimum.

However, further increasing the size of land plots used in agriculture leads to decreasing of efficiency of agricultural production due to the increase in transaction costs per unit of land area.

The major problem is to evaluate the effectiveness of projects related to consolidation of agricultural lands. In our opinion, evaluation of the effectiveness of mentioned above projects should be carried out based on benefit-cost analysis. The most important condition for application of benefit-cost analysis for evaluation of land consolidation projects is to ensure comparability of indicators of costs, benefits as well as efficiency based on international financial reporting system. It could create additional incentives to attract outside investors in Russian agriculture.

Thus, the consolidation of agricultural land is the basis for the development of investment process in agriculture, which allows increasing its efficiency by reducing transaction costs and attracting outside investors to allocate their capital in agriculture. 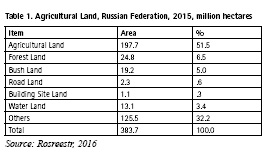 The dominant role in the Russian agricultural land use has played joint stock companies as well as production coops (See Table 2).

The share of joint-stock companies and partnerships in the total area of agricultural land of parastatals amounted 51.8% and in the area of cropland 56.8% in 2015. 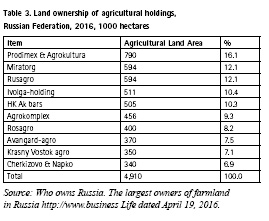 Private farms have played an important role in the Russian agricultural private land use (See Table 4). The share of private farms in the total area of the private agricultural land use amounted 31.5% and in the area of cropland – 39.9 % in 2015. 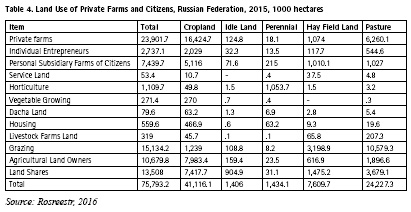 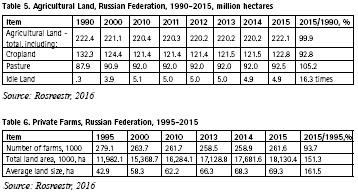 However, the average size of agricultural land occupied by private farm has been increased due to land consolidation. It was estimated 69.3 hectares in 2015. Thus, it increased by 61.5 % compared to 1995.

The legal framework for Agricultural Land Consolidation in Russia includes the Constitution of the Russian Federation, the Civil Code, the Land Code as well as other legal acts. In 2010- 2017, some existed legislative acts were amended and adopted new laws that have a significant impact on the development of Agricultural Land Consolidation in Russia.

Land plots had to be transferred without bidding only for the construction of important infrastructure projects, for individual housing construction, personal subsidiary farming and in other specific cases. The authorities had to put up for sale vacant land plots based on applications of citizens and legal entities, except if they were reserved for state or municipal needs, limited in circulation, etc. According to the Law, the starting auction price of the land plot was the cadastral value. Information on the availability of free land plots authorities had to oblige to show on the official websites. The Federal Law #171 was entered into force on March 1, 2015.

On December 24, 2014, in accordance with the Order # 540 of the Ministry of Economic Development of the Russian Federation issued on September 1, 2014, a new classification of types of permitted land use within the land categories was introduced. According to it, owner of the land plot shall have the right to choose any type of permitted use of the installed for the given land plot. The order identifies 12 target types or zones. They are agricultural, residential, public, business, recreational, industrial, transport, defense and security, special protection, forest, water, general use. In turn, each zone is divided into smaller sub-zones. For example, agricultural zone divided into crop, animal husbandry subzones, etc.

According to the Federal Law #354, the starting auction price of the withdrawn agricultural land plot is the market value of such land, determined in accordance with the Federal Law of the Russian Federation issued on July 29, 1998, #135 “On valuation activity in the Russian Federation” amended on July 29, 2017, or the cadastral value of such land if the results of the state cadastral valuation approved no earlier than five years before the date of the decision on public tenders.

The method of determining the starting auction price of the seized land plot at public auction must be stated in the court decision on seizure of a land plot and selling it at public auction. Private farms and parastatals involved in state agricultural production support programs could lease state and municipal land up to 5 years without bidding or via land auction in case of availability of several applications. Thus, the implementation of the mentioned above law will allow redistributing and consolidating unused agricultural land in order to increase the efficiency of agricultural production by reducing transaction costs.

The Federal Law of the Russian Federation dated December 30, 2015, # 431-FZ “On geodesy, cartography and spatial data and on amendments to certain legislative acts of the Russian Federation” was issued to ensure the creation of national geodetic, levelling and gravimetric networks to carry out geodetic and cartographic works. Owners of real estate objects, which are points of the above networks, are required to ensure their safety and notify the authorized body about all cases of damage or destruction. In addition, they must provide the possibility of performing to geodetic, cartographic and repair as well as restoration works. 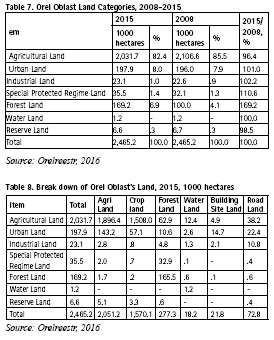 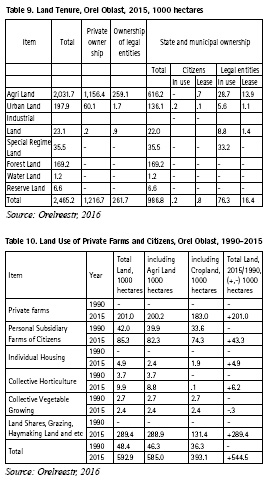 According to the Law, the federal, departmental and regional spatial databases will be established. Access to these databases will be possible via the Internet. The state information system of maintenance of a unified electronic cartographic base will be introduced. The use of this information will be paid. In accordance with the article #32 of the Law, it came into force since January 1, 2017. According to the Law, on January 1, 2017, were changed the names of licensed types of activities and reduced the list of types of geodetic and cartographical works of federal appointment, subject to licensing. Reissuance shall be subject to all existing licenses to conduct such work. The legislation also clarifies the education requirements related to the mentioned above activities. Territorial bodies of the Rosreestr are issued licenses for execution of geodetic and cartographic works. Officials of the Rosreestr must supervise the licensing of geodesic and cartographic activities, carry out inspections and issue orders to eliminate violations. Since January 1, 2017, a subject of licensing is determination of the parameters of the figure of the Earth and gravitational fields, the creation or updating of state topographic maps and plans, the creation of the state geodetic networks, leveling networks, gravimetric and geodetic networks special purpose networks, including networks of differential geodetic stations. Surveyor organizations must have a license to carry out works for establishment, modification and refinement of data related to the state border of the Russian Federation, borders between subjects of the Russian Federation and municipal boundaries. Other types of geodetic and cartographic works can be carried out without registration of the license. 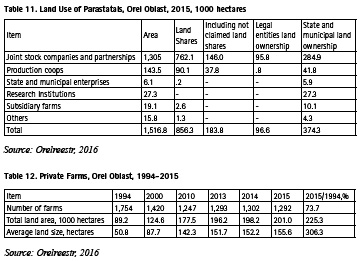 The super goal of the program is harmonization of land and property relations based on respecting the balance of interests, mutual responsibility and coordinated efforts of the Government, businesses and society, enabling the transition to innovative socially oriented type of economic development of the Russian Federation. The objectives of the program are the following:

▪ Ensuring the provision of services on the principle of “one window” and the transition to assessing the quality of service;

▪ Improving the quality of these information resources to ensure investment attraction and enhance the efficiency of real estate taxation.

▪ The total funding of program is amounted 27,100.65 million rubles. Expected outcomes of the program implementation can be described as the following:

▪ The increase the number of the Russian Federation’s regions which implemented the unified state register of immovable property up to 85 units;

▪ The increase the number of the Russian Federation’s regions which ensure the transition to the state system of coordinates from the local coordinate system adopted for conducting uniform state register of immovable property of up to 85 units; The increase the proportion of individuals who report positively on the quality of the work of the registration authorities in the total number of respondents to 90 percent;

▪ The reductions of waiting time in queues for applicants for uniform state register of immovable property information up to 10 minutes.

Orel Oblast Land Legislation is based on the following legislative acts: The Decree of the Head of Administration of Orel Oblast # 616 issued on December 12, 1997, on farm reorganization and land privatization; Target Program on development of the Legal Basis of Orel Oblast Land Reform approved by the regional authorities on October 10, 1998; Orel Oblast Law issued on June 5, 2003, #331-OZ“On turnover of agricultural lands in Orel Oblast”;

They occupied 1,305 thousand hectares, or 86 % of agricultural land of parastatals of the region in 2015.

The following measures must be implemented to strengthen the organizational as well as institutional sustainability of development of Agricultural Land Consolidation in the Russian Federation.

▪ The institutional framework for implementation of Agricultural Land Consolidation must be improved both at the federal as well as regional level too;

▪ The training and retraining programs related to Agricultural Land Consolidation issues must be introduced;

▪ The public relation campaign to strengthen people’s ability to understand the role and importance of Agricultural Land Consolidation Development must be initiated;

▪ The pilot projects focused on Agricultural Land Market as well as Agricultural Land Consolidation Development should be launched in the some of the regions of the Russian Federation to make demonstration effect;

▪ The Agricultural Land Consolidation Development Experience should be collected, scrutinized and disseminated.

The State (National) Report on the Status and Use of Lands in the Russian Federation in 2015, Rosreestr,2016;

The Regional Report on the Status and Use of Lands in Orel Oblast in 2015, Orelreestr, 2016;