With the growing concerns of global climate change and its impacts on the environment, the importance of spatial data infrastructure (SDI) play a crucial role in offering accessibility to climate data and information to researchers interested in addressing the issues related to climate change. This paper describes a climate data portal developed for Nepal in the context of linking it with Spatial Data Infrastructure with the aim of reducing costs of climate data and improving data quality, making data more accessible to the users, while at the same time increasing the benefit of using available data. The proposed approach tries to design an SDI based approach capable of monitoring, detecting, and predicting climate change so as to enable effective decision making. It will also ensure the best sharing and exchange between partners and stakeholders so that they are interactively connected to use the data efficiently and in a flexible manner.

It is a known fact that in the today’s world internet plays a crucial role in exchanging large amounts of spatial data. Professional data centers have found secure ways to share their data resources with peers and third-party users, either as a free service or as a commercial activity (van der Wel, 2005). The GIS community has been working tirelessly to make spatial data available through internet. Therefore, it is worth considering the need for having a data infrastructure for conducting any climatological and meteorological research (van der Wel, 2005). A meteorological data infrastructure can be developed by taking the guidance from any existing Spatial Data Infrastructure (SDI). Environmental problems demand decision making and monitoring tools that are based on readily available and accessible spatial data.

Therefore, open access to accurate and representative climate information has a huge impact on awareness raising, especially issues concerning with climate change and climate variability. Availability of climatic data is identified as one of the most important elements under the United Nations Framework Convention on Climate Change (UNFCCC) and its subsequent Kyoto Protocol to combat unprecedented climate change. In addition, access to meteorological/climatological database via a web portal is essential for understanding the climate change impacts in climate sensitive sectors such as agriculture and food security; water resources; biodiversity; health; and so on which is of utmost importance for sector specific policymakers, planners, stakeholders, end users and for the general public to plan their routing works.

The Nepal Climate Data Portal is designed to facilitate the analysis of historical climate/meteorological data as well as future climate scenarios in different geographical setting in the country using a publicly accessible web based interface. It is also designed to be a rather sophisticated calculator with its own meteorological database to produce maps, time-series charts or downloadable data. It uses simple language to represent arithmetic and statistical operations like a spreadsheet. The intended audience for the web portal are research scientists, meteorologists, hydrologists university students, sector specific decision makers and anyone who needs to understand past and future (projected) weather and climate patterns in the country. The web portal allows and facilitates the clients to purchase historical meteorological data, which are being collected and maintained by Department of Hydrology and Meteorology (DHM) for over several decades.

Objectives of Designing the Portal

Understanding vulnerability and impacts associated with climate change and climate variability in different climate sensitive sectors in different climatic zones is key for managing risks of weather and climate disasters and taking appropriate proactive adaptation measures for climate change. As the current degree of vulnerability and impacts to communities in Nepal and their resilience depend on physical, environmental, social and economic aspects, analysis of historical meteorological information on different temporal and spatial scales is of vital importance. 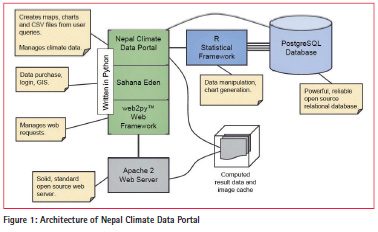 It is equally important to provide future climate change scenarios using stateof- the-art dynamical downscaling tools such as PRECIS (Providing Regional Climates for Impacts Studies-Model), RegCM4 (Regional Climate Model-4) and WRF (Weather Research and Forecasting-Model) at high spatial resolution. This will allow scientists and researchers to quantify the projected potential changes in mean climate and its extremes, which would help policy makers, planners and stakeholders for taking proactive adaptation measures in the vulnerable sectors such as agriculture, water, energy, health, etc.

Asian Disaster Preparedness Center and Bjerknes Centre for Climate Research (BCCR), Norway, in association with Faculty of Geo-Information Science and Earth Observation (ITC), University of Twente, The Netherlands and The Energy and Resources Institute (TERI), India, have implemented a project on “Climate Data Digitization and Downscaling of Climate Change Projections in Nepal: Strengthening Capacity for Managing Climate Change” that was funded by Asian Development Bank (ADB). The ADPC team worked jointly with the Department of Hydrology and Meteorology (DHM) and Tribhuvan University in Nepal. The Climate Data Portal was officially launched in August 2012. Several technical and capacity building trainings were conducted for DHM for long term sustainability of the data portal.

Stakeholders were involved in the development of the portal throughout the project implantation stage. At the technical level, there was a close alignment between the requirements of the Nepal Climate Data Portal for historical climate data and projected future climate scenarios. The portal was designed with the aim of providing users with an integrated platform to access climate data and the ability to compare historical and projected climate information and data (Figure 1). Sahana Eden Humanitarian Open Source Software platform had been used for developing the portal and Python 2.6, R, R multicore library, RPostgreSQL, rpy2, PIL, xvfb, PyQT4, QTWebKit were used to design it. The Portal allows the users to view the climate data on an interactive map and generate different information products including exporting the raw data. 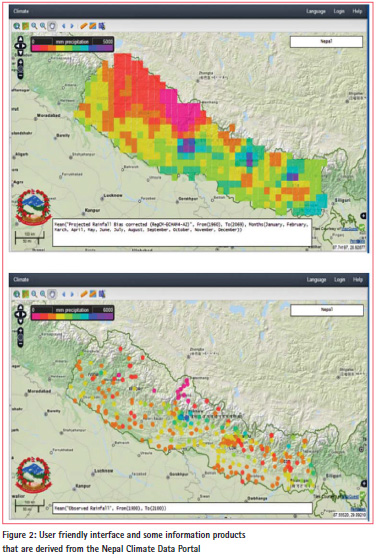 The Nepal Climate Data Portal produces various information products from observed, gridded and projected climate data to cater to the needs of different stakeholders (Figure 2). It is seen that technical experts and climate professionals prefer raw data for their own analysis while other professionals, such as government officials, policymakers and sector specific planners prefers analyzed end products such as maps and charts. The Nepal Climate Data Portal provides the following data types based on specific queries:

Features of the Web Portal

The Nepal Climate Data Portal has been designed for providing better access to the historical meteorological/climatological data and future climate scenarios of the country. Therefore, the portal is provided with features which includes:

• Performing as a sophisticated web-based calculating engine with its own database;

• Allowing additional climate data in netCDF format to be uploaded into the portal through its user interface.

However, raw observed meteorological/ climatological time series data are accessible on purchase. The portal also includes information on pricing options as specified by the DHM. Users will be able to purchase the data directly from the site with payments being made offline to DHM office or Bank.

Climate data has been extensively used to assess the impacts of climate change and to identify the degree of vulnerability in climatic sensitive sectors such as agriculture, water, energy, health, etc. Therefore researchers, scientists, academics, sector specific planners and policy makers will be benefited from the Portal in terms of carrying out activities such as:

• Infrastructure planning such as adaptation measures and;

To understand the climate system, one must understand a wide range of complex processes occurring over time. It can be naturally induced or man-made. Therefore, to understand such processes taking place and its impacts and consequences, a wide variety of climate related information are required that needs to be routinely maintained, stored, managed and analyzed within a system. Such a system can be considered within the ambit of a spatial data infrastructure (SDI). The Nepal Climate Data Portal may be one such system which can be called as the Climate Base Spatial Data Infrastructure (CSDI). The portal developed for Nepal already addresses the functionality to effectively manage climate data through data ingestion, extraction and metadata management which is also within the required WMO standards of 2014. Considering the portal as a CSDI will open up data sharing needs of the agencies based on cooperative relationships. It will further enable DHM in collecting and integrating climate related data from various sources which will help analyze and validate data and information for effective decision making. Integrating data from various sources will increase the effectiveness of the system while at the same time will reduce the duplication and increase cost effectiveness. According to Sharma and Acharya (2004), the aggregation and integration of fundamental data sets and framework data sets should solve the purpose of National Spatial Data Infrastructure (NSDI) for Nepal and should pave the way for easy accessibility of data and resources thereby making the works of user’s community more simple, efficient and effective. Therefore, efforts should be made to integrate already available climate and geospatial databases including the CSDI to address the needs and concerns of the end-users. Not only is access to climate data and information needs to be linked or integrated within the SDI framework, so is the capacity of national institutions, leadership and civil society to determine what climate data and information is needed for adaptationrelated decision-making (UNFCCC 2008; Dutta and Jayasinghe 2015). This can be further stated in the guiding policy statement on the importance of building a CSDI in Nepal and its probable links to make it operational as described under Nepal‘s NSDI framework.

Improving the Capacity of Department of Hydrology and Meteorology (DHM)

It is very important to improve the capacity of DHM in the context of maintaining the portal so that it is sustainable and its functioning remains effective. The work implemented in Nepal tried to address the ways to improve the climate data collection process of DHM to meet future challenges based on the country needs. Based on the assessments carried out in the country, it was found that the current network of meteorological stations needs to be further expanded for better coverage of meteorological data, enhancing infrastructure, and upgrading equipment’s as well as increasing human resource needs for improving DHM. Time to time capacity building of DHM staffs would help maintain the sustainability of the portal with better efficiency.

The authors wish to acknowledge Asian Development Bank (ADB) for financial assistance to develop Nepal Climate Data Portal for DHM, Nepal. They also wish to thank Ms. Cindy Malvicini, Senior Water Resources Specialist, Environment, Natural Resources and Agriculture Division (SAER) of ADB for valuable guidance during the project period. They also wish to extend their gratitude to the Ministry of Environment Science and Technology, Government of Nepal for granting the project “Climate Data Digitization and Downscaling of Climate Change Projections in Nepal” under “TA7173-NEP: Strengthening Capacity for Managing Climate Change” to Department of Hydrology and Meteorology of Nepal.

Dutta, R. and Jayasinghe, S. (2015). Integrating Spatial Data Infrastructure in Monitoring Climate Change Impacts: A Research Oriented Approach. Approach (TS-3: SDI Development; Commission: 2 of the International Federation of Surveyors (FIG), and Technical Commission: IV, Working Group: 4 of the International Society for Photogrammetry and Remote Sensing (ISPRS)). Peer Reviewed and published in the Proceedings of the International Workshop on the Role of Land Professionals and SDI in Disaster Risk Reduction: In the Context of Post 2015 Nepal Earthquake, Kathmandu, Nepal, 25 – 27 November, 2015.