Looking at the bright side of satellite navigation

The official program of the three-day conference was kicked off on March 14 in the ancient walls of the Court Church of All Saints. Prof. Dr. Bernd Eissfeller, chairman of the conference, and Prof. Dr. Merith Niehuss, president of the Universitaet der Bundeswehr Muenchen, welcomed the participants. The Deputy Bavarian Minister- President and Bavarian State Minister for Economic Affairs and the Media, Energy and Technology, Ilse Aigner, emphasized via video message that satellite navigation plays an important role for the economy, especially with the latest declaration of the Galileo Initial Services. The panel discussion of the first conference evening was dedicated to the topic “Satellite Navigation in a changing political and technical environment”. High-level representatives from European ministries and entities as well as from the USA and China took the questions from the moderator Claus Kruesken.

After the outage of clocks on board of several Galileo satellites was much debated
in the weeks before the conference, the European representatives made clear that this failure is not a fundamental issue and that the general function of the satellites is not affected. In principle, Pierre Delsaux, Deputy Director General, DG Internal Market, Industry, Entrepreneurship and SMEs at the European Commission, underlined that it is important to look on the bright side of life. Given the complex technology of satellites, Europe should be proud of what it has already achieved with 18 fully functional satellites in orbit. According to Pierre Delsaux it is still the aim, to provide the fully operational system by 2020.

GNSS – Is it time for backup?

The program of the following two conference days offered a variety of upto- date topics. Besides the traditional presentations on the global, regional and augmentation satellite navigation systems, the morning of the second conference day was dedicated to the overall theme “GNSS – Is it time for backup?”. The correspondent session pointed out how GNSS services could be complemented by terrestrial PNT systems and was chaired by Dana Goward, president of the Resilient Navigation & Timing Foundation. He explained that backup is not about single systems, but rather about building up a complementary and resilient architecture. Dominic Hayes from the European Commission underlined that Europe wants to include several backup options instead of focusing only on one specific navigation solution.

The program also entailed the second generation of the Galileo system. Prof. Vidal Ashkenazi, CEO of Nottingham Scientific Ltd, debated amongst others with representatives of the European Space Agency (ESA), the European Commission and the OHB System AG, how stability, precision and integrity can be ensured for the new generation. The third and last conference day was dedicated to panel discussions on the Galileo Public Regulated Service (PRS), the Civil GPS Service Interface Committee (CGSIC), the BeiDou system as well as the Interoperable GNSS Space Service Volume (SSV).

Besides the technical program the participants had the chance to visit exhibition booths of several companies and institutions like Airbus Defence and Space, the European Commission, NavCert GmbH and Telespazio. 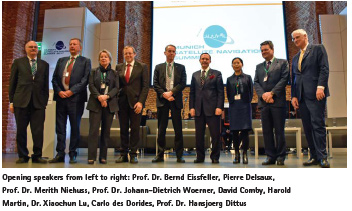