On November 18, 2015, the Quasi-Zenith Satellite System Service Co., Ltd. (QSS) conducted an experiment in Kyoto, Japan using a quasi-zenith satellite system (QZSS) in collaboration with the GNSS International Symposium, IS-GNSS2015, in order to verify the effectiveness of the QZSS in providing highly accurate bus location information and tour information for participants on a sightseeing bus tour.

The QZSS is an exclusive GPS compatible navigation system that is being developed under the jurisdiction of the Government of Japan.

The positioning signals, L1C/A, L1C, L2C and L5 are compatible with GPS, the augmentation signals, L1S and L6, reduce positioning error, and a messaging service is expected to be used for disaster recovery. The coverage area is focused on the Asia- Oceania region as well as Japan.

Purpose and background of the test

Many new business opportunities are expected to arise in Japan as it is anticipates a significant increase in international tourists leading up to 2020.

However, there is concern about missed business opportunities due to a lack of multi-lingual human resources in Japan.

A lack of tourist information services, such as bus tour guides, ranks high among these concerns.

As a result, QSS has proposed a system to provide tourist information in a timely manner for international tourists, and has demonstrated its potential. This system is a combination of a “quasi-zenith satellite system” which is expected to start in the 2018 fiscal year, using GIS technology and conventional IoT technology.

Participants in the experiment included those who attended the GNSS international symposium, IS-GNSS 2015, which was held in Kyoto in November 2015.

Kyoto City is regarded as an important symbol of Japan, and it is very popular with international tourists.

Consequently, this testing represented an ideal opportunity for QSS to demonstrate the possibility of related services and Japan’s Quasi-Zenith Satellite to GNSS experts from around the world.

Figure 1 Shows the Sky Plot during the experimentation. 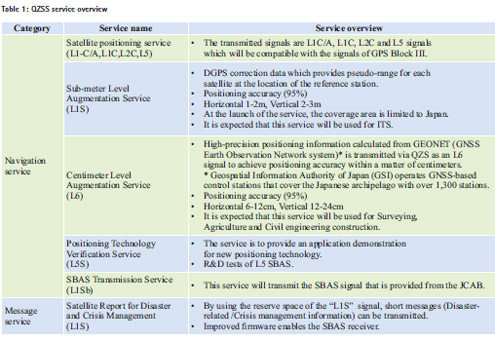 Overview of the Experimental System

The system constructed for this study consists of the following three major segments.

1) On-Board(Bus) segment This is the receiver that was installed on the ceiling of the tourist bus. The receiver collects accurate position Figure 1: Sky Plot (Each Satellite’s Position during the experimentation) information for the bus, and sends the location to the data center.

2) Data Center; Web Server segment The Web Server maps the location information of the bus on Google Maps, then combines it with the tourist information around the bus.

The User segment is the tourist’s own smartphone. When users access the Web server from the smartphone, points of interest and the current position of the bus is displayed on the smartphone. In addition, photos and descriptions of attractions can be displayed by tapping an icon.

Figure 2 Shows an overview of the experimental system 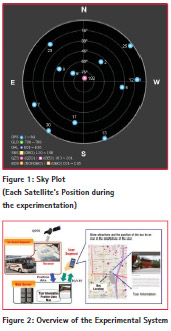 The testing of this system was aimed at demonstrating commercial service possibilities. Therefore, the system was configured in consideration of cost and technical ease.

Approximately half of the 94 participants in this experiment were international visitors. Five buses were used during a half-day tour of some of Kyoto’s most historic locations, including the Kinkakuji Temple, Nijyo Castle, Fushimiinari Shrine and Kiyomizu Temple.

The trial version of this tourist guide application received positive evaluations from participants for its functions and performance.

Although the experiment also exposed some issues that need to be overcome, the development teams view this as an opportunity to further improve the tourist information system with even more helpful content.

Going forward, QSS will continue to proceed with further verifications in order to ensure that international visitors can enjoy the best travel experience possible.

For the information on the QZSS, please visit, http://qzss.go.jp/en/