The Airports Authority of India (AAI) have decided to implement an indigenous satellite based regional GPS augmentation system also known as Space based Augmentation System (SBAS) as part of the Satellite based Communication, Navigation, Surveillance (CNS) / Air Traffic Management (ATM) plan for civil aviation. Towards this end, a National Plan for Satellite based Navigation System has been prepared. The Indian SBAS called GAGAN (GPS And Geo Augmented Navigation) System will be implemented jointly by the Indian Space Research Organisation (ISRO) and AAI. 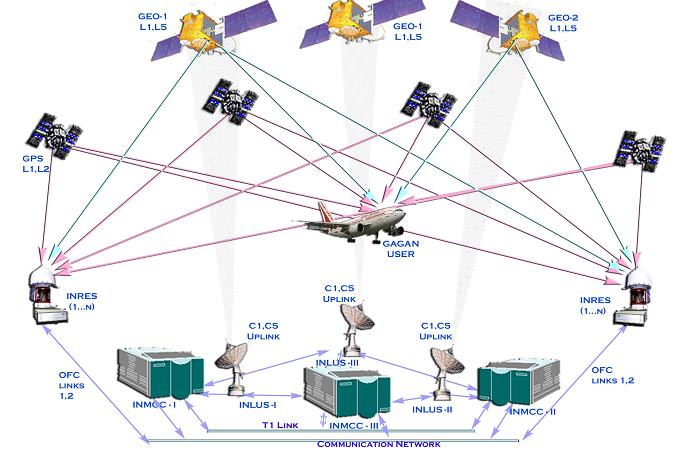 (a) Lack of surveillance facilities over large areas of region which require relief from congestion.

The first SBAS system was developed by the United States using two INMARSAT-III GEO Navigation payloads (POR & AOR-W) and is called the Wide Area Augmentation System (WAAS). European Geostationary Navigation Overlay System (EGNOS) is being implemented by the European Space Agency since 1996 and was declared operational in the year 2010 for APV 1.0. EGNOS uses the other two INMARSAT-III Navigation payloads (IOR & AOR-E) and ARTES payload. The MTSAT Satellite Augmentation System (MSAS) is being implemented by the Civil Aviation Bureau, Ministry of Land, Infrastructure and Transport, Government of Japan and is expected to be uprgraded soon. All evolving SBASs must comply with Standards And Recommended Practices (SARPs) specified by ICAO to provide seamless navigation to civilian aircraft across the globe. The SBAS implementation over the Indian Air-space will bridge the gap between the evolving EGNOS and MSAS systems.

A mechanism is required where the Indian system becomes a part of an evolving Global Navigation Satellite System (GNSS) consisting of the core constellations and the SBASs.

The Need and types of Augmentation

At present, there are two core constellations which provide satellite-based navigation in the world – The Global Positioning System (GPS) of the United States with 31 satellites and GLObal NAvigation Satellite System (GLONASS) of the Russian Federation with 23 satellites. These core constellations provide position accuracies of the order of 30 meters, Circular Error Probable (CEP) anywhere on the surface of the earth through inexpensive hand-held receivers. Both these systems operate in the L-band. The accuracy available through these core constellations is not adequate for precision approach and landing requirements in civil aviation. A third core constellation of the European Galileo system is under development and is expected to be operationalised 2014-15 with 24 satellites.

The core constellations can be augmented in three ways – Aircraft Based Augmentation System (ABAS) augments and/or integrates the information obtained from GNSS elements with information available on-board the aircraft in order to ensure operation according to the values specified in ICAO SARPs.

Ground Based Augmentation System (GBAS) consists of augmenting the core constellation through differential GPS elements implemented close to an airport and transmitting the corrections to the aircraft through a suitable data link.

Integrity is a measure of trust that can be placed in the correctness of the information supplied by the total system. Integrity includes the ability of a system to provide timely and valid warnings to the users (alerts).

The maximum allowable time elapsed from the onset of the navigation system being out of tolerance until the equipment enunciates the alert.

Continuity of a system is the capability of the system to perform its function without unscheduled interruptions during the intended operation.

Availability of GNSS is characterized by the portion of time the system is to be used for navigation during which reliable navigation information is presented to the crew, auto pilot or other system managing the flight of the aircraft.

The Wide Area Differential GPS (WADGPS) also known as SBAS concept is illustrated in Figure 1. There are five major elements in any SBAS:

INRESs collect measurement data and broadcast messages from all the GPS and GEO satellites in view and forward it to the Indian Mission Control Centre (INMCC). As per the present planning, 15 INRESs have been located at the following places in India:

The GAGAN INMCC is located at Bangalore and at present consists of two INMCCs and two INLUSs. The chief functions of the INMCC are

The INMCCs consist of a main frame computers and a host of secondary computers connected to a network. The communication interfaces of the INMCC with other ground segment elements is shown in Fig. 2. 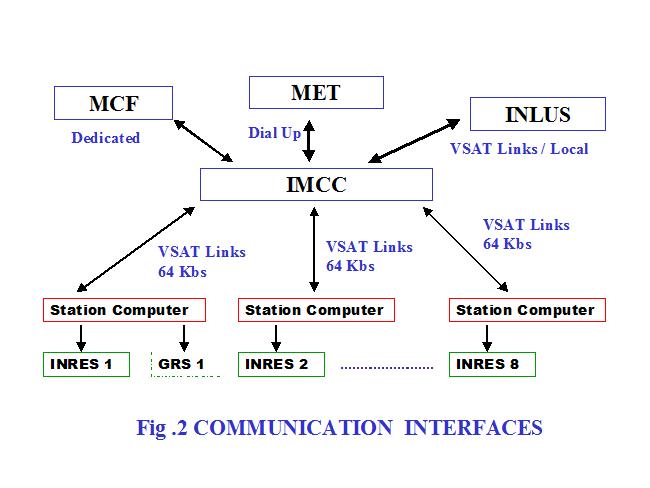 INLUS communicates with the Indian Nav. Payload . This earth station receives messages (which contain UDREs and Iono-tropo grid models) from the INRESs through the INMCC, format these messages and transmit them to the GEO satellite navigation payload for broadcast to users. The INLUS also provides GEO Ranging information and corrections to the GEO satellite clocks. Message formats and timing are as per the ICAO SARPs.

It is proposed to fly a Navigation payload compatible with GPS L1 frequency (and possibly GPS L5 frequency) on an Indian satellite to be positioned in the Indian Ocean Region between the orbital arc 48 deg. E to 100 deg.E longitude. The salient characteristics of the payload are:

The functions of the Nav. Payload are:

• to relay Geostationary overlay signal compatible with GPS L1 frequency for use by modified GPS receivers.

• to provide a CxC path for ranging by INRESs with an uplink from the INLUS.

Several antenna configu-rations for L-band are under study. Some of the candidate antennae are

The first payload is expected to be made operational in the year 2011 followed by two more payloads in 2012 and 2013. The L1/L5 frequency payload footprint is shown in Fig. 3. 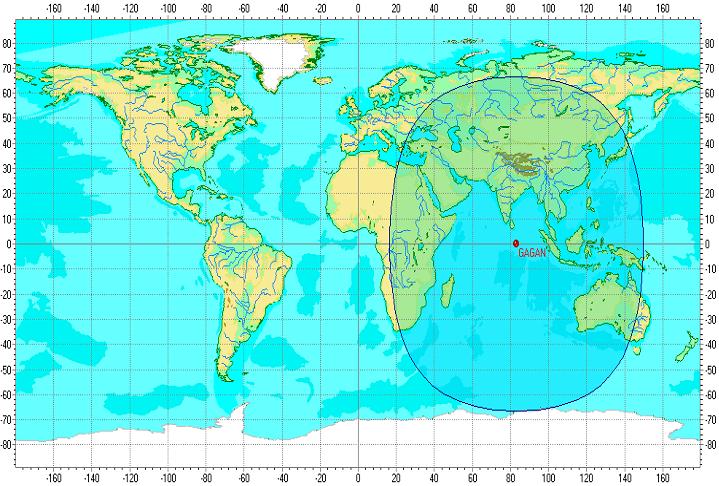 Three phases have been identified for reaching the Full Operational Capability (FOC) for GAGAN.

The objective of the Technology Demonstration System (TDS) is to develop indigenous capability in SBAS implementation. 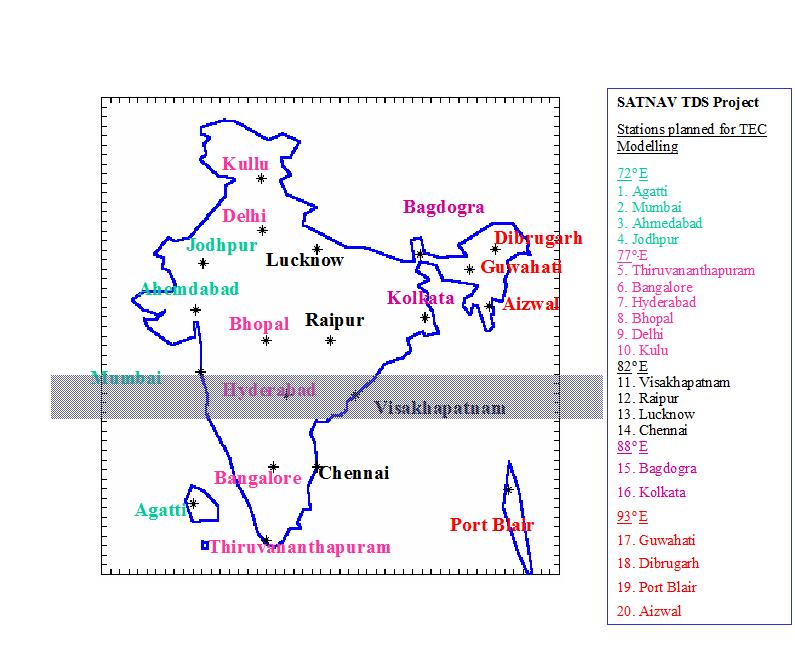 Under the TDS, AAI and the Indian Space Research Organisation (ISRO) has established the necessary ground and space segment for demonstration of SBAS functioning, A successful demonstration was carried out in August 2011. The achieved position accuracies were shown to be better than 7.6 meters on a test AAI aircraft.

The Preliminary System Acceptance Test (PSAT) was recently conducted and has reconfirmed that the achievable accuracies are much better than the 7.6 meter achieved during TDS. It is aimed to achieve APV 1.5 level of position accuracy by 2012.

The ionosphere delays the L-band signals and introduces unpredictable range errors. The ionospheric conditions in the low latitude regions are more difficult to measure and model.

The ephemeris error in the data downlinked through the GPS L1 frequency to ordinary GPS receivers is in the vicinity of about 7 – 8 meters. This translates to an equivalent position error. In SBAS a better ephemeris model (through UDREs) is transmitted to the Geo-Stationary satellite which enables a modified GPS receiver to improve the ionospheric and ephemeris related errors resulting in better position accuracies. Clock errors are offset through accurate measurements made at INRESs since this is a one dimensional error.

Ephemeris stands for the 6 orbital elements of a Keplerian orbit in which the navigation satellites operate. With global ground networks, GPS is achieving sub centimeter level accuracies in orbit determination. In the GAGAN SBAS, the GPS satellite orbits and augmentation payload orbits are redetermined and transmitted to the augmentation payloads.

(i) Iono-Tropo modelling and scintillation studies in the L-band will be carried out over the entire Indian Airspace as an integral part in the TDS Phase 1.

The following strategy has been adopted to develop suitable grid based ionospheric model over the Indian region.

(a) About 20 total electron content (TEC) receivers shall be located at the Centre of the 25 deg x 5 deg. ionospheric grid points (IGP) over the Indian region as shown in Fig.4.

(b) The data from these receivers shall be logged into a personal computer and the logged data shall be delivered to all academic and scientific institutions on which contracts are placed to carryout the necessary studies.

(c) All receivers and PCs shall have an uninterruptible power supply (UPS) and necessary housing at all the 20 sites. The instrumentation at all the sites shall be identical. A suitable Ionospheric Scinti-llation and TEC monitor receiver equipment which is best suited for these studies shall be deployed at all the sites.

Data from the TEC stations is being collected for almost 8 years now. This is a vast amount of data for better iono tropo models. ISRO and AAI engineers have developed accurate iono tropo models over the Indian Flight Information Region (FIR).

Advanced Publication Information (API) for the Indian Nav. Payloads has been filed with the International Telecommunications Union (ITU).

During the FOP, international assistance would be sought for the definition of inter-operability for the Indian SBAS, system validation, testing and certification. 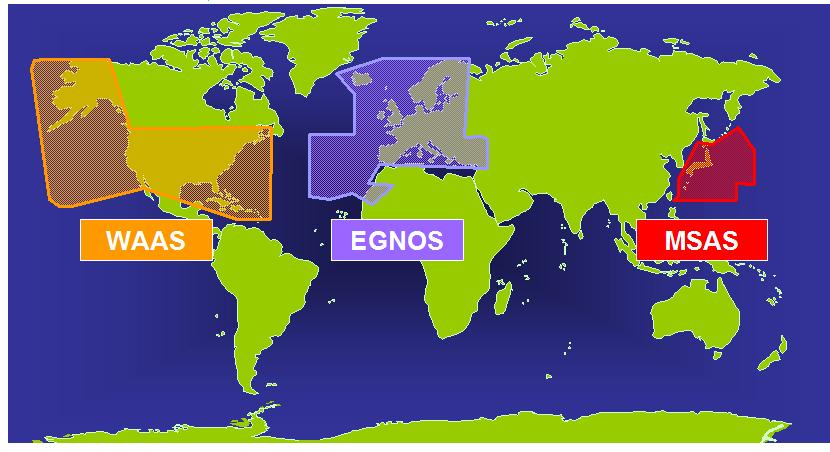 The GAGAN satellite based augmentation system is expected to be implemented by the Airports Aurhority of India (AAI) and Indian Space Research Organisation (ISRO) by 2012 and made operational after certification by 2014. The Ministry of Civil Aviation and the Airports Authority of India are therefore in a position to cater to increased flow of traffic and demand for ATS over India.

The US National Airspace has implemented the Wide Area Augmentation System (WAAS) over the US National Air Space (NAS) with a position accuracy of Approach Vertical-2 (APV-2) by 2008. The Federal Aviation Administration of US is working towards achieving CAT-I accuracies in the near future. The European Commission (EC) has implemented the European Geostationary Overlay System (EGNOS) over the European Civil Aviation Council (ECAC) region shown below with a accuracy of APV-1.0 by 2010-11. The Japanese MTSAT Augmentation System (MSAS) is expected to reach higher levels of accuracy in the near future. It is aimed to achieve APV-1.5 level accuracy for GAGAN which is primarily for civil aviation over the Indian Airspace. These four augmentation systems provide around the globe seamless GNSS based navigation system for civilian aircrafts.

The lead taken by the Ministry of Civil Aviation in implementing GAGAN and possible certification by 2014 will propel India as only the fourth country with the most modern airspace in the world.

The Indian Flight Information Region (FIR) falls between Europe and South Asia, Europe and South East Asia and Europe and the South Pacific. A modern Airspace is important from the point of view of providing ATS to civil aviation aircraft used to flying in regions where such modern CNS/ATM facilities are available.