Implementation of a Semi-Dynamic Datum in New Zealand

In 1998 LINZ implemented a new geocentric datum, New Zealand Geodetic Datum 2000 (NZGD2000) with a reference epoch of 1 January 2000 (2000.0) to address inaccuracies in the previous datum (NZGD49) as well as datum degradation over time due to crustal deformation.

NZGD2000 is realised in terms of ITRF96 and uses the GRS80 ellipsoid (Grant et al 1999). NZGD2000 was defined to be a semi-dynamic datum where coordinates remain fixed at a reference epoch, however the inclusion of a deformation model enables:

This is achieved by incorporating a national horizontal deformation model (Fig. 1) to model the estimated (predicted) effects of crustal deformation. 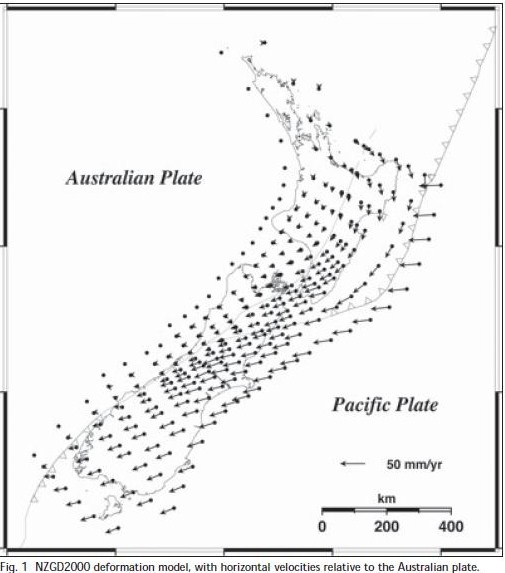 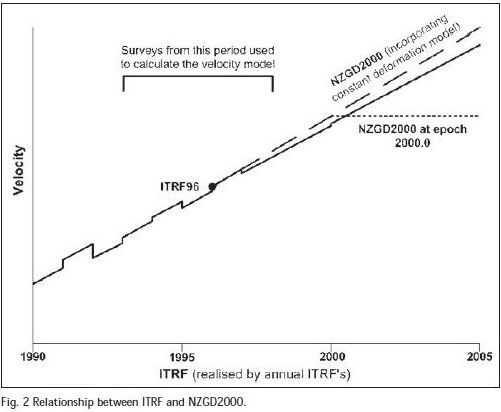 What has gone well with the implementation of NZGD2000

Issues with the implementation of NZGD2000

As with implementing any new system, a number of limitations have been recognised and have, or are in the process of, being addressed.

The surveys used to determine the initial deformation model in NZGD2000 are now over 15 years old. As time passes, errors in the determination of the velocities used in the deformation model have led to increasing errors in the calculated coordinates of marks in terms of the reference epoch, 2000.0. Research has indicated that in parts of New Zealand the existing deformation model is already unable to predict the current positions of geodetic marks at their required accuracy level. In effect, the datum is still steadily degrading with time, but at a much slower rate than if no deformation model had been used.
In addition, since NZGD2000 was implemented, New Zealand has been struck by several significant earthquakes such as the 15 July 2009 Fiordland earthquake (Fig. 3). It is proposed that a patch will be added to the deformation model so that the effects of earthquakes can be accommodated. 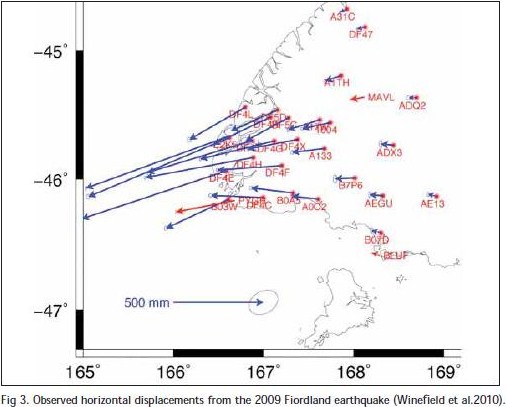 Providing ‘current’ or non-2000.0 coordinates of the CORS sites is not necessarily a trivial exercise. Three options are being evaluated:

1. Publish a weekly position based on GNSS observations at each CORS station.

2. Predict positions from a model fitted to the CORS time series, with the model allowing for some or all of: straight line; seasonal (annual, semi-annual) terms; steps (coseismic and/or equipment changes); aseismic tectonic deformation events.

The New Zealand cadastral system is based on a fundamental legal premise common to most cadastral systems around the world that undisturbed survey marks form the primary evidence for property boundary definition. Accordingly, the New Zealand cadastral system is founded on a large number of physical survey marks and survey observations. v
When using theodolite and electronic distance measuring equipment, connections to geodetic control marks are generally within 1-2 km of the survey area. For most practical purposes the effect of crustal deformation over these relatively short distances can almost always be ignored. More recently however, greater use is being made of GNSS systems and ties to geodetic control marks can include much longer lines, including lines to CORS stations in excess of 100km. With the greater survey accuracy achievable using such technology over long lines, the effects of crustal deformation must now be considered

To overcome these issues, all observations (or coordinates) need to be transformed into a common epoch; either epoch 2000.0 or the epoch of the survey. For these users the management of the dynamics can become a complex issue and annoyance. Ways of simplifying this process need to be sought.

Managing the spatial alignment of the cadastral system

One of the key drivers for the move to NZGD2000 was the automation of New Zealand’s survey and titles systems. All cadastral boundaries in New Zealand now have geodetic coordinates – although some are more accurate than others. This “geodetic cadastre” is managed in a system called Landonline.

While applying the deformation model and updating geodetic data is a relatively trivial task using tools developed to undertake these tasks, updating the cadastral data and boundary marks connected to this control is a more complex task due to the sheer volume of marks concerned.

The development of NZGD2000 necessitated the upgrading of geodetic control to NZGD2000 status. This was achieved in two ways:

1. Survey using GNSS of existing and new control; and

It has become clear that there can be a misalignment between the surveyed and readjusted control such that if a cadastral surveyor uses a mixture of both control types they can fail to meet their cadastral survey accuracy requirements. The solution to the problem has been to downgrade the accuracy of doubtful readjusted geodetic control so that its stated accuracy more accurately reflects its true accuracy. This is necessitating the provision of a larger amount of newly surveyed control than was originally envisaged.

NZGD2000 is now 12 years old however continued development of it continues to ensure that its spatial accuracy meets user requirements. A number of developments are underway and potential future developments are being considered.

Research has indicated that in parts of New Zealand, the existing deformation model is already unable to predict the current positions of geodetic marks at their required accuracy level. Work is currently underway to develop a new deformation model and this will be incorporated into the datum to ensure that its spatial accuracy can be maintained.

An automated post processing system (PositioNZ PP) is being developed for the LINZ CORS network. One of the advantages of such a system will be that it will generate official NZGD2000 coordinates for marks using the deformational model and tools to ensure that corrections are applied efficiently and correctly.

NZGD2000 is realised in terms of ITRF96. Significant improvements have been made to the ITRF and for ease of computations and better data management, it is logical that NZGD2000 be moved to a later realisation of the ITRF. While the inclusion of a deformation model in NZGD2000 has meant that the accuracy of the datum has been able to be maintained for a much longer period than if it were a static datum, it is apparent that an updated deformation model will be required shortly. In the relatively near future a new or updated datum will be required – NZGD201X.

Given the acceptance of a semi dynamic datum in New Zealand, the tools developed to manage its dynamics, and the experience gained in managing coordinates in a dynamic environment, it is logical that consideration should be given to a fully dynamic datum that maintains a constant relationship with the ITRF at some time in the future.

NZGD2000 has now operated in New Zealand for over 10 years. The use of a semi dynamic datum has been well accepted and its implementation and use have been relatively straight forward from a technical and geodetic perspective. The use of the deformation model has meant that the accuracy of the datum has been maintained over a much longer time period than if it were a static datum.

A number of issues have been identified from a user perspective, particularly that of maintaining the accuracy of the deformation model and also allowing users of the system to incorporate long distance observations in their surveys or to use real time CORS networks.

Future enhancements to NZGD2000 will continue to ensure user requirements are met. The next step will be upgrading the deformation model, inclusion of a vertical component in the model, and perhaps moving to a later realisation of the ITRS. In the longer term, consideration will be given to moving to a fully dynamic datum but such a move is expected to be some years away.

Winefield R, C Crook and J. Beavan (2010). The Application of a Localised Deformation Model after an Earthquake. From proceedings of XXIV FIG Congress 2010, April, Sydney, Australia. Available at http://www.fig.net/srl