GHGSat Inc. has unveiled sample imagery from its demonstration satellite, Claire (or GHGSat-D), which has detected emissions of methane from a hydroelectric facility under construction in Africa. GHGSat’s vision is to become the global reference for remote sensing of greenhouse gas (GHG) emissions from industrial sites, using satellite technology. Claire captures an array of over 200,000 atmospheric measurements around an industrial facility in a few seconds.

These measurements are processed to produce imagery showing a “heat map” of greenhouse gas concentrations from the facility. It is the world’s first and only satellite designed to measure greenhouse gas emissions from sources on the scale of industrial facilities. GHGSat’s sensor technology has also been miniaturized to fit on a low-cost nanosatellite, enabling the company to offer commercial greenhouse gas measurement and monitoring services to help industrial emitters measure, control and ultimately reduce their emissions. www.ghgsat.com

The Space Flight Laboratory (SFL) of Toronto has announced the signing of a new contract to provide Dubai-based Mohammed Bin Rashid Space Centre (MBRSC) with a microsatellite for aerosol and greenhouse gas monitoring. The DMSat-1 (also known as “AirWatch”) satellite will leverage past developments at SFL for a rapidly developed mission that will incorporate two payloads. The primary payload is a multispectral polarimeter used to monitor aerosols – fine particles of liquid and solids in the upper atmosphere normally caused by man-made sources, but also correlating to natural phenomena such as dust storms. The secondary instrument is a pair of spectrometers that will enable MBRSC to detect greenhouse gases like carbon dioxide and methane over the UAE. www.utias-sfl.net

At least 15 Russian remote sensing satellites to operate by 2020

He pointed out that the demand for services linked to the use of data obtained by remote sensing was significantly increasing.

“Russia is known to have incontestable competitive advantages in this sphere and we must use them as much as we can. First of all we should increase the orbital group ensuring the remote sensing,” Putin said. http://news.az/articles/world/121925

A new Indian Institute of Science (IISc), Bengaluru, study named ‘Four decades of forest loss: Drought in Kerala’ using remote sensing data pins the blame on eroding forest cover. Between 1973 and 2016, Kerala lost 906,440 hectares (9064.4 sq.km) of forest land, as per the study. Consequently, the forest cover as a percentage of total land area has been reduced from 66.2% to 42.15%. In other words, Kerala has diverted more than 50% of its total forest area for other purposes since 1973 (from when the remote sensing data is available). But the drastic reduction in forest cover points towards the massive land use changes in the state, said Ramkrishnan Ramabhadran, who along with senior scientist T.V. Ramachandra, authored the IISc study. www.livemint.com

ESA is establishing a ‘one-stop shop’ in partnership with the Manufacturing Technology Centre to cover 3D printing. The MTC research organization will manage the new ESA Additive Manufacturing Benchmarking Centre (AMBC), which will provide a simple and easy way for ESA projects and hitech companies to investigate the potential of 3D printing for their work. The move will see the ESA call on the expertise of the MTC, which offers access to the latest state-of-the-art 3D printing capabilities, allowing prototype parts to be produced and then assessed in terms of their suitability for specific applications.

It’s used as a coolant in nuclear power plants and as a desiccant to remove humidity that otherwise would ruin moisture-sensitive products. Found in every cell in the human body, it transmits nerve impulses and regulates blood pressure. And as it turns out, sodium — the sixth most abundant element in Earth’s crust — also is useful as a tracer for characterizing Earth’s mesosphere, a poorly understood region of Earth’s atmosphere that’s sensitive to both the infl uences from the sun above and the atmospheric layers below. A team of scientists at NASA’s Goddard Space Flight Center in Greenbelt, Md., now wants to develop the world’s fi rst spaceborne sodium lidar that would illuminate the complex relationship between the chemistry and dynamics of the mesosphere that lies 40- 110 miles above Earth’s surface — the region where Earth’s atmosphere meets the vacuum of space. www.nasa.gov

The Indian Space Research Organisation launched the GSAT-19 satellite, one of the heaviest communication satellites, with the GSLV MK III-D1 rocket. The rocket became the heaviest to be launched by the Indian space agency ever with the heaviest single payload put in orbit as well. The rocket has the capability to carry a payload as heavy as 4,000 kg and put in into the Geosynchronous Transfer Orbit. It can also carry a 10,000 kg payload and put in into the Low Earth Orbit.

A jubilant Indian Space Research Organisation (ISRO) Chairman A S Kiran Kumar said it “is a historic day” and the the Geosynchronous Satellite Launch Vehicle Mark-III (MkIII D-1) has successfully demonstrated its capabilities with the injection of GSAT-19 into the desired orbit. “It is a great success in the first maiden attempt and GSLV MkIII has successfully put in orbit GSAT-19 which is a next generation satellite,” Kumar said.

The launch marks another success for India’s space agency that has made record-setting launches during the past year. ISRO has plans to use the rocket for manned missions in the future. The rocket is a three-stage launch vehicle which has two solid motor strap-ons, a liquid propellant core stage and a cryogenic stage. The rocket is 43.39 metre in height which is roughly the height of a 12-storey building. http://indianexpress.com 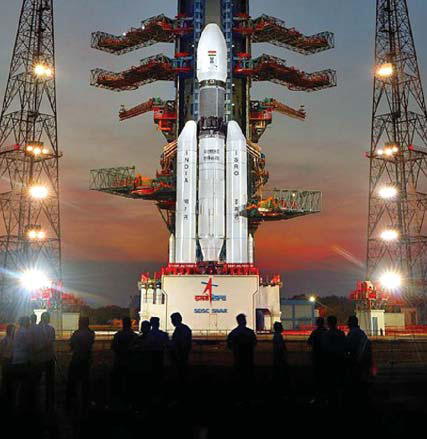