Accurate and continuous position computation is a key task for vehicle navigation and telematics applications. In most portable car navigation and telematics devices, the position is determined based only on GPS data. However, in urban canyons stand-alone GPS suffers signal masking and reflections of the signal from buildings, large vehicles, and other reflective surfaces. Driving tests in such metropolises as Hong Kong, Tokyo, and New York show that the chance of receiving four GPS satellites required for navigation can be as low as 20% of total driving time [1]. Even when four or more satellites are available, strong multipath effect might cause a positioning error of more than 100 m.

In order to obtain uninterrupted navigation data in urban environment, GPS data can be augmented with a complementary navigation system that can work continuously in any type of urban environment [2]. This is known as an integrated navigation system. This article presents such an integrated GPS/ DR (Dead Reckoning) navigation system. We consider a DR configuration consisting of one gyro for directional measurements and 3D accelerometer. Both the gyro and accelerometers satisfy the requirements for mass market portable consumer devices: low cost, light weight, and low power consumption. An odometer is not used in the proposed system as it requires additional car installation; this system is intended mainly for portable devices such as mobile phones, GPS-based peripherals, and handheld GPS navigation devices. This paper shows how GPS data can be augmented with DR sensor data using an Extended Kalman Filter (EKF) to achieve the required navigation performance in urban environment. In the proposed system, the DR sensors are calibrated when GPS is available. If GPS signal is not available or GPS position accuracy suffers from multipath, the calibrated DR sensors are used to determine the position of the vehicle. Our field tests with a real-time prototype show that the proposed method improves the performance of vehicle positioning in high multipath signal environments and during short GPS signal outages.

The proposed car navigation system includes different types of navigation sensors and technologies. Our concept of data fusion from multiple sensor technologies is illustrated in Fig. 1. 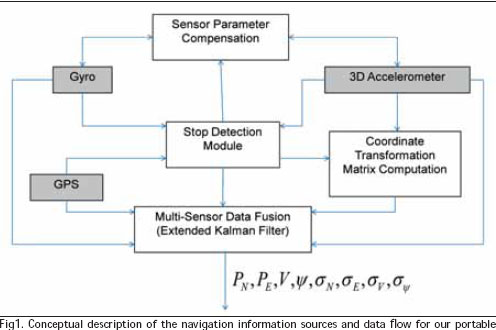 • Calibration of the inertial sensors when a vehicle is stationary; and

• Integrated GPS/DR navigation solution. The hardware parts of our navigation system are the shaded boxes.

To evaluate the performance of the proposed GPS/DR navigation system, a real-time prototype was built (fig. 2); a yaw-rate gyro (Analog Devices ADXRS150 [4]) and a 3D accelerometer(VTI Technologies SCA3000 [5]) were selected as the dead reckoning sensors to augment an L1 GPS receiver (Fastrax IT03 [6], which is based on chipset by Atheros). 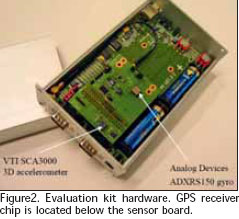 The states for the gyroscope and acceleration measurement errors were modeled as the first order Gauss-Markov processes. The observation vector is calculated by taking the difference between GPS and DR corresponding positions and velocities, and in some cases heading. 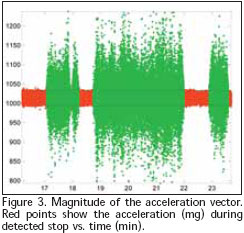 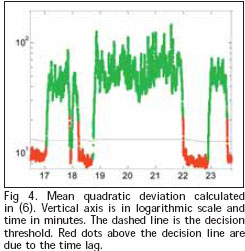 The horizontal alignment includes the estimation of the sensor frame orientation with respect to the pseudo vehicle frame [2]. The pseudo vehicle frame can be defined as follows: X axis corresponds to longitudinal axis of vehicle, Z axis corresponds to vertical axis of the local level, and Y axis completes the triad. When the vehicle is stationary, the outputs from the horizontal accelerometers are caused by the tilt of the sensor frame with respect to the local horizon and accelerometer biases. This effect can be compensated in the following manner:

In reality, the alignment is usually performed in a place, which is tilted with respect to the local horizon by some small angle. In this case, the transformation matrix 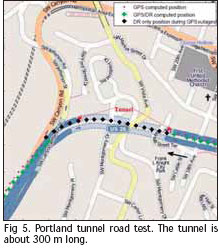 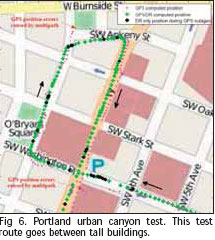 The yaw angle between sensor frame and vehicle frame can be estimated when vehicle is accelerating with constant direction [2] using the following kinematic relation:

In our navigation system, both the alignment and calibration are implemented in real-time and can be performed at any time when vehicle is stationary. It takes about 20 seconds to complete all these procedures in fully automatic mode. There is no need for the user to take any special actions. During and after the alignment the portable navigation device has to be fixed into a cradle.

The system has the capability to reinitialize alignment and calibration parameters at any time when it is not moving. The need for re-computation of alignment parameters may arise due to change in orientation of the device while on the move but the algorithm can detect such a change. This change can affect the gyro scale factor. The need for re-computation of accelerometer and gyro calibration parameters is caused by changes of accelerometer and gyro bias mainly due to temperature variations.

The stationary state is detected by a stop detection module based on accelerometer information. Our stop detection algorithm is based on the analysis of the vehicle acceleration measured by the accelerometers and its variance. When GPS signals are available the velocity computed by a GPS receiver can also be used. 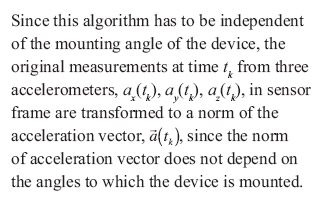 A typical example of the magnitude of measured acceleration vector during a test drive is shown in Fig. 3. Vehicle acceleration in horizontal plane depends significantly on the movement of the vehicle including road imperfections, measurement bias, and noise. As it can be seen from the curve, during a complete stop the variance of the signal is noticeably smaller since it contains only the gravitational acceleration, accelerometer noise, and engine vibrations. The short time bias drift is negligible. The sampling frequency of accelerometer in this example was 100 Hz.

The real-time implementation of this algorithm is based on the analysis of accelerometer data inside time window of predefined length. The time window length is one of the design parameters in this algorithm and usually chosen as 0.6–1.0 sec. Then the mean quadratic deviation of the acceleration samples from

inside this time window is calculated as 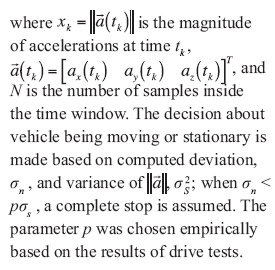 This algorithm can work in all types of vehicles and has the ability to adapt to different conditions during short learning phase when GPS is available. The real-time version of stop detection algorithm employs the probabilistic approach. It analyses the accelerometers data within a moving window.

Our portable car navigation system was tested in road tests in urban environment that included tunnels, parking garages, urban canyons, and road interchanges. Figure 5 displays the system positioning performance during driving test in Portland, OR that included a 300 m long tunnel. The direction of the car motion is shown by the arrow. Magenta dots correspond to the standalone GPS receiver position measurements. It should be noted that there are no GPS solution in the tunnel. The green crosses for the trajectory on the map correspond to the combined GPS+MEMS computed position. The black dots correspond to the dead-reckoned solution when GPS signals were not available. The first GPS position fix was received approximately 4 sec after the car passed the tunnel making the total GPS outage about 18 sec. The error of GPS+MEMS computed position at that time was less than 20 m. This test shows that the combined GPS+MEMS solution provides significant improvement; accurate position, velocity, and heading information were available even in the absence of GPS signal.

Figure 6 depicts the test route in Portland downtown. This test route included high-multipath urban canyon environment in the vicinity of high-rise buildings. In some places, GPS position error caused by multi-path was about 35 m. There are some time instances when the GPS signals were not available (black dots). This test shows improvements of the combined GPS+MEMS system performance in high-multipath environment, which is explained by the ability of the combined GPS+MEMS algorithm to filter out GPS position outliers.

This paper has shown that low-cost inertial sensors can significantly improve GPS positioning by continuing to output position during short GPS outages with sufficient accuracy for most of car navigation applications. The integrated GPS+MEMS system has also demonstrated improvement of position and velocity accuracy in high multipath urban canyon environment and the ability to provide continuous output of the vehicle heading even when vehicle is not moving. This is useful if we apply the map-matching algorithm. This device does not require any installation in the vehicle. It works in all vehicles and can be easily transferred between vehicles. Finally, it should be noted that our design is suitable for portable navigation devices since the cost, size, and power consumption of inertial sensors meet the requirements for mass market consumer electronics.