GNSS measurements in Uzbekistan for hydrology

The paper describes a method for improving the coordinates of hydrological stations using the GNSS. Traditional methods of determining the coordinates of level posts are analyzed in this work. The requirements for the accuracy and installation of geodetic points of level posts are given. A scheme of the GNSS network of the coastal zone with reference to the satellite geodetic network (SGN) of Uzbekistan has been developed. The results of measurements of six level posts using GNSS TRIMBLE R4 and a mobile navigator are given here. The accuracy of the coordinates and the covariance matrix are presented graphically depending on the measurement interval. It is proposed to perform GNSS measurements of the entire coastal zone of the main rivers of Uzbekistan.

Recently, attention has been increased to determining the level of rivers using GNSS in connection with the change in the water balance. The water management complex of the river basin supports the rational use of water resources and is represented by hydraulic structures. A complex system has been created with a significant number of canals, pumping stations, and collectors. The irrigation network covers those places where settlements are concentrated and the control of water consumption by special recording devices becomes obvious. The replacement of classic recorders with modern mobile devices has led to an increase in the accuracy of fixing the level rail mark. The introduction of a precision coordinate system requires a more detailed check using modern information technologies. For this purpose, the most important is the improvement of the classical coordinates of hydrological stations, obtained in different years by various geodetic instruments, as well as the development of the GNSS network of the coastal zone.

Geographic latitudes and longitudes of points of hydrological stations were obtained in the SK42 based on classical measurements. Since the main task of the hydrological stations is to determine the change in the water level, the rectangular coordinates were calculated approximately from topographic maps (Fig.1).

As for the altitude, it was obtained by barometric or technical leveling. It should be noted the importance of the height value in determining the water level. With the help of optical levels, geometric leveling is performed with respect to the known benchmarks of the leveling network, the heights of which are reduced to the Baltic system of heights. Altitude accuracy will depend on instrument errors, calculations, and the reliability of the reference coordinates. Therefore, the accuracy of the altitude component of the point is also intended for determining the differences in sea levels and studying the vertical movements of the investigated surfaces. Coordinates of the benchmarks were calculated by the methods of triangulation and leveling. The reduction of the heights to the state leveling network is carried out by leveling the III and IV orders. Naturally, the existing network requires complete modernization and reconstruction using digital devices. The only way out of this situation is to develop a method for increasing the accuracy of coordinates. It should include measures to create a system of permanent satellite observations of the dynamics of the river level and forecasting its state, which will allow solving applied problems in the design and construction of various hydraulic structures.

In connection with the introduction of satellite and information technologies into geodetic practice, the problem arises of reducing the coordinates of level posts. It is advisable to simultaneously perform the binding of benchmarks to points of the SGN located near the coastline (Fig.2).

In 2003, 19 reference stations were installed on the territory of the Republic of Uzbekistan, but over time their number increased to 50. However, with such an increased number of ground satellite stations, the territory of the coastal zone was not covered by a GPS network, which indicates the need to create a SGN, including the benchmark of hydrological stations. For this, it is advisable to develop a project of a geodetic network, which should include triangulation, leveling and level posts, as well as new GPS stations near the main benchmarks. 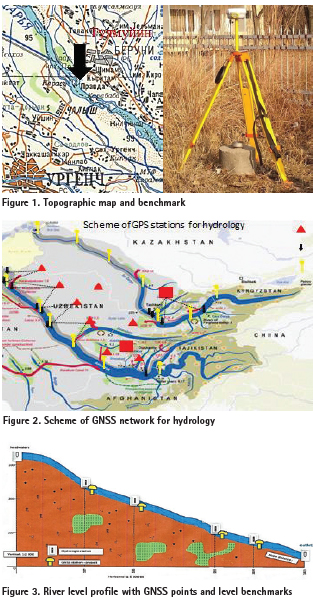 The last time geodetic works of level posts were carried out in 1960-70 by technical leveling by a geodetic enterprise of the main department of geodesy and cartography. Since GNSS works were never carried out at these points, the first task was to test the navigation receiver for the presence of signals from satellites and to assess the effect of DOP on the accuracy of coordinates. Several posts of the level were selected for testing, where the infrastructure of the road network is developed (Fig.3). The selected stations are optimal for experiment, since the Syrdarya and Amu Darya rivers pass through the territory of Kyrgyzstan, Tajikistan, Uzbekistan, Kazakhstan and Turkmenistan. The study of the materials of the previous hydrological works showed that the clarification and updating of the coordinates of the points of the level posts of the coastal zone was not carried out due to insufficient funding and the organization was reorganized. In the process of GPS data at level points, the receiver is centered to the center of the benchmark, thereby minimizing the deviation of the plumb line from the normal.

At these sites, all the necessary organizational work was prepared to determine the coordinates of 6 points using the GNSS Trimble R4. More detailed studies were carried out at the “Chinaz” hydrological station, which is located in the Tashkent region. There is a triangulation point for the geodetic organization of Uzbekistan near this station.The rectangular coordinates of the point were calculated in the transverse-cylindrical projection of the Gauss-Kruger. The Krasovsky reference ellipsoid was used as the reference system, and the normal heights are given relative to the Baltic system of heights. The average values of hydrological stations coordinates are calculated using the method of transformation.

In practice, rectangular coordinates of the Gauss-Kruger projection are used, but in this case, pay attention to the location of the benchmarks relative to the axial meridian. On the axial meridian, the distortions along the y coordinate are equal to zero, and with distance from it, the distortions increase. For example, for a 6-degree zone at the edges of the meridian, it reaches 1: 3200, which is too large for accurate measurements (Fig.4). In order for the distortions to be minimal or not to affect the rectangular coordinates, it is necessary to go to spherical coordinates, i.e. to latitude and longitude. In modern receivers, there are special geodetic formulas for the transition from one coordinate system. The disadvantage of joint adjustment of the SGN and traditional geodetic networks is the unequal accuracy. This leads to an incorrect solution of the system of equations. The solution of an incorrect system of conditional equations requires the involvement of a more correct and accurate method for processing geodetic works. The main stage of adjustment is to obtain the estimated values of the geocentric coordinates of the points. 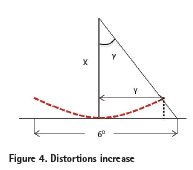 On the basis of the least squares method, mean square errors of coordinates were calculated. Assuming that the measurements were performed under the same conditions, the unit weight error can be considered equal to 1.0. There were cases of non-uniformity of signal reception from the satellite. Consequently, the results obtained can be considered preliminary or accurate in the first approximation (Tab.1).

The average values of the coordinates of the main point of the “Chinaz” level post are obtained on the basis of an array of measurements: x = 4531887.621, y= 12473205.639, H= 248.865. The main DOP ranged from 0.9 to 3.0, which is a natural result for points located near technical objects, as they affect the signal path (Fig.5). The PDOP results show that satellite signal reception is good, although buildings and structures have been built near the site. 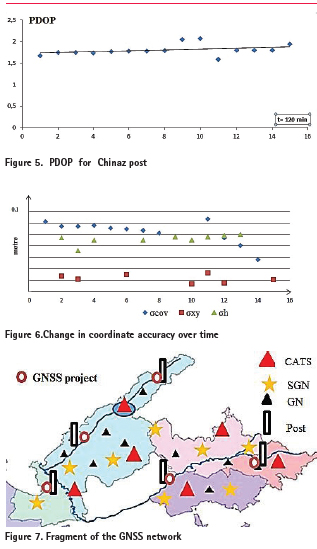 Based on the analysis of variance, graphs of changes in the coordinates of the “Chinaz” point depending on the number of observations were built. Since our task was to determine the preliminary coordinates, the signal reception interval was reduced to 10 minutes. The maximum height of satellites was set to 15 degree to exclude reflected signals from the surface layer and built structures. The quantitative characteristic of the accuracy of the measured and determined values is the root-mean-square error of these values. From the sequential processing of baselines for each session, coordinates with a covariance matrix are obtained COVxyz.

In the figure 6 shows the changes in the accuracy of the coordinates of the “Chinaz” post. The average values for the components cov, σxy, σh have an insignificant trend, which indicates an equal measurement accuracy over a short time interval. In order to obtain the exact coordinates of the benchmarks, it is necessary to perform as many GNSS observations as possible over a long time interval under various signal reception modes. Such investigations should be performed at all hydrological posts of the main rivers with the binding of these posts to the SGN.

To organize continuous monitoring of the river level using GNSS, the geodetic support system is proposed to start with the following procedures: reconnaissance, development of measurement techniques, testing GNSS at hydrological posts, processing and post-processing of satellite observations. After carrying out the above works, an adjustment of the SGN of the coastal zone should be performed. The final equalization of the height of hydrological stations should be implemented in the WGS84.

The duration of continuous observations should be performed with GPS equipment, which allows high-precision referencing of the network of benchmarks to remote points of the SGN. Points of the Central Asian Tectonic Science and classical geodetic network with known coordinates should be used as control points when adjusting the SGN of the coastal zone (Fig.7).

Thus, the use of GNSS will make it possible to increase the accuracy of the coordinates of hydrological stations. This will result in the transfer of daily coordinates to the database and monitoring of changes in the river level in real time. In the future, it is advisable to carry out geophysical studies of the coastal zone in order to interpret the dynamics of changes in the relief of hydrological stations.

The authors are thankful to Hasanova D. and Boysarieva Sh. for help in GNSS measurement.

GPS constraints on the distribution of deformation of the Tien Shan, N-Pamirs and behavior of the Tarim. 14th Himalaya-Karakorum-Tibet Workshop. Terra Nostra, 127.