An Inmarsat-led team of companies in the UK, building on national expertise and prior experience within the group, has begun broadcasting a satellite navigation signal as part of a programme to explore the creation of a sovereign national capability in resilient positioning, navigation and timing (PNT) for the aviation and maritime sectors. The signal, being broadcast in coordination with the US Federal Aviation Administration (FAA), the European Space Agency (ESA) and the European Union Space Programme Agency (EUSPA), is now stable and operational, enabling on-going testing and validation by industry, regulators, and users.

UKSBAS – the UK Space-Based Augmentation System – generates an overlay test signal to the US GPS, fullycompliant with International Civil Aviation Organization (ICAO) standards, to enable assessment of more precise, resilient and high integrity navigation for maritime and aviation users in UK waters and airspace. It increases accuracy in positioning to a few centimetres of accuracy rather than the few metres provided by standard GPS. This is a similar system to that already under evaluation in Australia and New Zealand, supported by Inmarsat.

Since leaving the European Union, the UK is not part of the Galileo satnav system and cannot use the European Geostationary Navigation Overlay Service (EGNOS) safety of life (SOL) services, which enable the use of GPS for airport approach and landing operations for aircraft. By repurposing the SBAS transponder on Inmarsat’s I-3 F5 satellite in geostationary orbit at 54° west, the UKSBAS signal enables testing of this potential alternative system to begin. Built by Inmarsat’s Athena partner Lockheed Martin and launched in 1998, I-3F5 covers the UK as part of its Atlantic Ocean region service overlay. This makes it an ideal candidate to participate in this test and demonstrates the commitment to sustainability of Inmarsat with a satellite that has already served the equivalent of several low Earth orbit (LEO) satellite life cycles.

These tests will assess whether UKSBAS can develop into a full operational capability to support safety-critical applications such as airport approach and landing operations or navigating ships through narrow channels, especially at night and in poor weather conditions. Goonhilly provides the signal uplink for the system from Cornwall and software from GMVNSL, based in Nottingham, generates the necessary navigational data. www.inmarsat.com

The EU Space Program Agency (EUSPA) has published the first Galileo High Precision Space Interface Management Document (HAS SIS ICD). It was published by EUSPA in collaboration with the European Commission and the European Space Agency (ESA).

By providing free, high-precision accurate point positioning correction (PPP) both via the Galileo signal (E6- B) and via the Internet, HAS offers users improved positioning performance with an accuracy of less than two decimeters. www.gsc-europa.eu

Launched in September 2021 as part of the European Commission’s CASSINI initiative and with over EUR 1 million in prize money on the line, #myEUspace is one of the biggest competitions ever organised by EUSPA. Innovators and entrepreneurs were challenged to develop and commercialise products/applications that use data and services from the EU Space Programme. While the solutions ranged from diverse sectors such as location-based services, smart mobility, geomatics and smart agriculture, they all share a foundation in their use of Galileo or Copernicus data as well as leveraging the synergies between the two.

Following are the winners of the #myEUspace competition:

In Track 1, the innovators had to develop their theoretical idea into a prototype:

• SANGENE: Integrated GNSS based passive radar for detection and first localisation of obstacles

• EO4RT: Web application for artistic and personalised products based on satellite images acquired over a specific region of interest –

• RIGOROUS: Efficient and effective development and deployment of solutions based on using Randomness- Intensive algorithms for nearreal- time route optimization

…while in Track 2, the innovators had to turn their existing prototype into a product and launch it on the market:

• SPAI: Solution to easily integrate satellite analytics in the work practices of experts and nonexpert users, extracting the EO value through AI effortless

As the Artemis missions journey to the Moon and NASA plans for the long voyage to Mars, new navigation capabilities will be key to science, discovery, and human exploration. Through NASA’s Commercial Lunar Payload Services initiative, Firefly Aerospace of Cedar Park, Texas, will deliver an experimental payload to the Moon’s Mare Crisium basin. NASA’s Lunar GNSS Receiver Experiment (LuGRE) payload will test a powerful new lunar navigation capability using Earth’s Global Navigation Satellite System (GNSS) signals at the Moon for the first time. GNSS refers to satellite constellations commonly used for position, navigation, and timing services on Earth. GPS — the GNSS constellation operated by the U.S. Space Force — is the one many Americans are familiar with and use on a daily basis.

“In this case, we are pushing the envelope of what GNSS was intended to do — that is, expanding the reach of systems built to provide services to terrestrial, aviation, and maritime users to also include the fast growing space sector,” said J.J. Miller, Deputy Director of Policy and Strategic Communications for NASA’s Space Communications and Navigation (SCaN) program. “This will vastly improve the precision and resilience of what was available during the Apollo missions, and allow for more flexible equipage and operational scenarios.”

LuGRE — developed in partnership with the Italian Space Agency (ASI) – will receive signals from both GPS and the European GNSS constellation, Galileo, and use them to calculate the first-ever GNSS location fixes in transit to the Moon and on the lunar surface.

“Space missions close to Earth have long relied on GNSS for their navigation and timekeeping,” said Joel Parker, LuGRE principal investigator at NASA’s Goddard Space Flight Center in Greenbelt, Maryland. “In recent years, NASA and the international community have pushed the boundaries of what was considered possible by using these techniques in the Space Service Volume and beyond.”

In 2016, the NASA’s Magnetospheric Multiscale Mission (MMS) employed GPS operationally at a record-breaking 43,500 miles from Earth. Then, in 2019, MMS broke its own record by fixing its location with GPS at 116,300 miles from Earth — nearly halfway to the Moon. 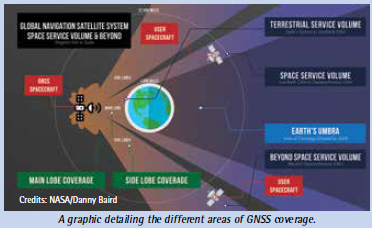 The LuGRE mission will use a specialized weak-signal receiver developed by Qascom, an Italian company specializing in space cybersecurity and satellite navigation security solutions, and funded by ASI.

LuGRE teams are now testing the payload in preparation to deliver it for integration onto the Firefly “Blue Ghost” lander in November of this year. Launch is currently slated for no earlier than 2024 from Cape Canaveral, Florida, aboard a SpaceX Falcon 9 rocket.

During the multi-week flight to the Moon, LuGRE will collect GNSS signals and perform navigation experiments at different altitudes and in lunar orbit. After landing, LuGRE will deploy its antenna and begin 12 days of data collection, with the potential for extended mission operations as well.

NASA and ASI will process and analyze data downlinked to Earth and then share results publicly.

“LuGRE is the latest effort in a long line of missions designed to expand high-altitude GNSS capabilities,” said Fabio Dovis, LuGRE co-principal investigator at the Italian Space Agency. “We’ve developed a cutting-edge experiment that will serve as the foundation for operational GNSS systems at the Moon.”

The LuGRE mission seeks to spark further development of GNSS-based navigation capabilities near and on the Moon, even as NASA plans to begin using high-altitude GNSS operationally for future lunar missions. NASA and ASI will bring the results of this work forward to the space community through the International Committee on GNSS, a United Nations forum focused on ensuring the interoperability of GNSS signals. These capabilities are also a key stepping stone towards building LunaNet, an architecture that will unify cooperative networks into seamless lunar communications and navigation services.

“The lunar deliveries we’re sourcing from commercial vendors are providing a number of innovative new technologies and opportunities to conduct experiments with affordable access to the lunar surface,” said Jay Jenkins, Commercial Lunar Payload Services Program Executive. “LuGRE is one example of the progress that government and industry can make when united in their exploration objectives.”

Developing new uses of GNSS for emerging space operations is a priority for the SCaN program at NASA headquarters, as the lead organization responsible for implementing guidance from Space Policy Directive-7, which directs NASA to develop requirements for GPS support of space operations and science in higher orbits and beyond into cislunar space.