Urban areas garbage is collected either by a government agency or private contractor. Garbage disposal constitutes a basic and expected service or function of urban local body. Urban solid waste management has become a major issue of concern for many underdeveloped nations, especially with population explosion. The problem is compounded as many nations continue to urbanize rapidly. The percentage of India’s population living in cities and urban areas has doubled. The garbage generated in the city has to be stored and collected at some common point from where it can be transported finally to the landfill sites or dumping yards. The primary collection and storage points are the dumper bins. They are large bins/containers which are placed at a location where large quantity of waste can be collected. These bins are directly transported by a dumper placer to Transfer Stations. The placement of bins to various locations depends upon the type of locality and amount of waste generated, access to road. etc.

The present study area is a part of Hyderabad Municipal Area Circle VI. It is the centrally located circle of Hyderabad city (Figure.1). It is the smallest of all circles, consisting of four wards. The area covered by this circle is less than six sq km. It is well served by road network. This circle includes the CBD of Hyderabad. Accordingly, the landuse of this circle is mixed in nature, i.e., it is characterized by commercial, institutional and residential landuse. Since it includes CBD and also due to its central location, this circle is well connected with other parts of the city. This circle is divided into four wards, i.e., 4A, 4B, 5A, 5B and 14 localities. Circle VI of Municipal Corporation of Hyderabad covers an area of 5.42 sq km. This circle recorded 38 slums and all these slums are notified slums. Circle VI registered 40,000 households and 6,000 commercial establishments.

1. To locate dumper bins with GPS and its spatial analysis

The study is based on secondary data which is supplemented by primary data. The secondary data is mostly collected from the Municipal Corporation of Hyderabad, Census of India. Road network is captured from survey of India Toposheets and other published sources. The primary data is collected based on questionnaire surveys. Sampling technique is used for the generation of primary data. Arc GIS software is used in processing, presentation and analysis of data. Buffering and network analysis is used in the location of dumper bins and routing purpose. GPS survey is done to locate dumper bins. Each dumper bin is given an ID No. The data is presented in the graphical and in the form of various types of thematic maps.

Distribution of dumper bins in Municipal Corporation of Hyderabad 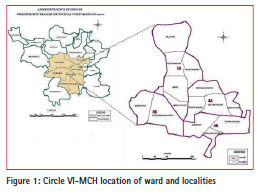 The spatial pattern of distribution of dumper bins in different circles of MCH is presented in Table 1. It is seen from Table 1 that the least number of dumper bins are located in circle II of Hyderabad. The reason for less number of bins in circle VI may be due to its small size. In case of circle II, it could be due to less densely built-up area and less number of bulk garbage generating units. Highest number of bins (>400) are associated with wards I, V and VII which could be due to its large areal extent. It is thus seen that the dumper bins in a particular ward, to a great extent, is influenced by its areal extent and quantum of garbage generated. 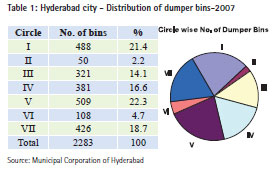 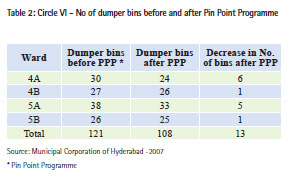 Pin Point Programme defines the schedule of Solid Waste Management from the specified dumper bin locations on a daily basis and shift wise regularly. In this programme, each vehicle is tracked for route and waste collection in this route, and transfer it to the Transfer Station and finally the waste is shifted from there to the Jawahar Nagar dump yard. This programme ensures solid waste collection vehicle-wise and route–wise.

The efficiency of collecting garbage cans is assessed by computing the number of houses that are covered by each dumper bin. It is seen from Table 3 that the number of houses covered per bin is highest in Ward 4A (223 Nos) and least in 5B (172 Nos). The higher ratio of houses to bin is more in Ward 4A and 4B, which is due to the fact that these wards are densely populated areas. 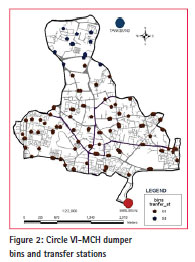 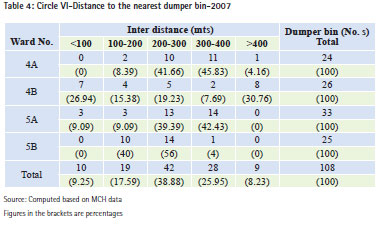 Locality-wise analysis of dumper bins revealed that maximum number of single dumper bins is located in Aghapura locality of Ward 5B. The problem of garbage collection and storage in this locality is substantiated by the fact that it is one of the largest localities with more number of premises and units. Only in one place are two dumper bins placed at a single location. Gunfoundry locality in Ward 5A is the only locality with a distinction of not having more than one dumper bin located in a single point. Esamia Bazaar locality in Ward 4B is the only locality where three dumper bins are placed in a single location. Ward 5A and 5B are do not have localities with 3 or 4 bins at a single point. 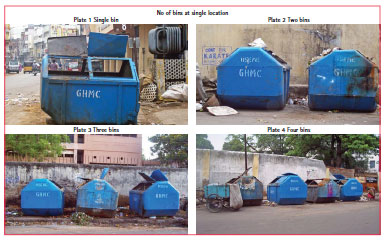 The distribution of dumper bins with a radius of 100 mt is shown in figure 4. The radius of 100 mt is considered here as an ideal distance from the point of view of collection of garbage. Buffering is used here as a decision support mechanism in the identification of gaps in the location of existing dumper bins. The location of dumper bins with a buffer of 100 mt radius revealed that there are gaps existing where new dumper bins can be located. It is observed from the figure that overlap in certain places. An attempt has been made to identify new locations based on the existing gaps. 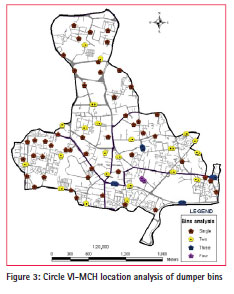 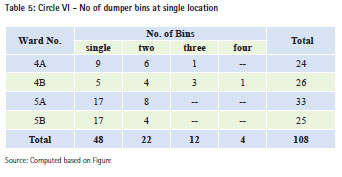 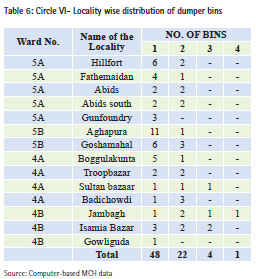 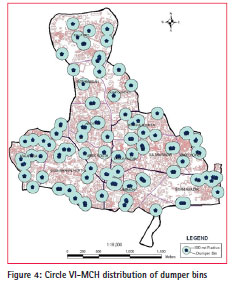 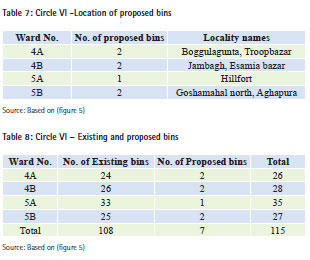 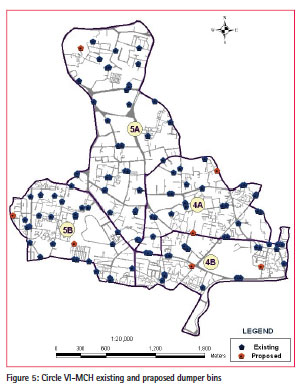