Geodetic measurements in the area of Kozloduy Nuclear Power Plant

For security purposes and safe and flawless operation of the Nuclear Power Plant (NPP) “Kozloduy” at the end of the last century it was given the task to build a monitoring system. As a major component of this system was to be built precise geodynamic (geodetic) network for investigation of deformations, which covers the territory of the plant, double channels and a territory outside the plant. One of the main objectives of the system for geodetic monitoring is monitoring of the spatial displacements and deformations that may occur in the facilities, on the terrain beneath them and in the surrounding areas. This paper presents the results of geodetic measurements of the NPP carried out during time span of 1998- 2013 by “Geoprecise Engineering” Ltd Company, mathematical data processing, analysis and interpretation of results. 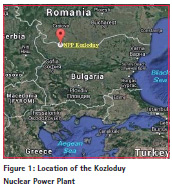 The construction of the first reactor began on 6 April 1970. Kozloduy NPP currently manages 2 pressurized water reactors with a total output of 2000 MW. Units 5 and 6, constructed in 1987 and 1991 respectively, are VVER-1000 reactors. One of the main objectives of the system for geodetic monitoring is monitoring the spatial displacements and deformations that may occur in the facilities, of the terrain below them and on the surrounding terrain. The results of geodetic monitoring can be used for prediction and prevention of possible accidents.

The geodetic measurements in the region of the Kozloduy NPP started in 1998 [Valev et al., 1999].

The entire geodetic network (Figure 2) is generally composed of the following parts which can be considered as separate subsites:

– Control Geodetic Network (CGN) consists of control points (pillars) and benchmarks on the pillars and covers the entire region.

– Secondary geodetic network consists of traverse points and benchmarks within the NPP.

– Geodetic network of points and benchmarks in the area of dual canal.

– Geodetic network of points and benchmarks in the area of the canal for additional technical water supply.

– Geodetic network of points and benchmarks in the area of the Coast Pumping Station (CPS).

The structure of entire geodynamic network according to different types of measurements can be regarded as composed of four separate geodetic networks:

The measurement types carried out are as follows: 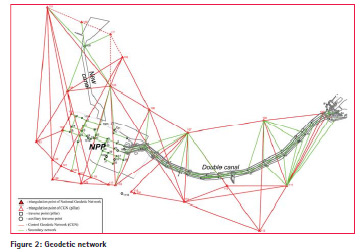 The results of all types of measurements are processed in compliance with the maximum mathematical rigor, taking into account all the possible harmful external influences and with minimum of hypotheses.

For each point are estimated: rms of coordinates, rms of position and the ellipses of errors. The obtained rms of the entire network is Mp = ± 5.8 mm

Secondary network is adjusted separately as definition of datum is from the control network.

The levelling network is adjusted commonly for the control network points and points of the subsites. 8 benchmarks are used for datum definition in the adjustment. The resulting rms per unit of weight, which is rms per kilometer, is: Mh = ±0.9mm. The obtained elevations of all benchmarks are in Baltic height system. The GPS network is adjusted as free network in two variants:1) using only GPS measurements; 2) using GPS measurements, distances measured by Mecometer and elevations from precise levelling [Valev, Minchev,1995]. The obtained results are adjusted spatial Cartesian coordinates of the points; ellipsoidal geographic coordinates and ellipsoidal heights; plane coordinates in a Lambert map projection. The accuracy of estimated results from two variants of GPS data processing is:

On the basis of the obtained results (point coordinates, point heights and distances between points) are studied:

• Magnitude and direction of horizontal vectors of point movements.

The vertical movements of the area of study are shown in figure 3.

Horizontal movements are calculated from the obtained displacements in coordinate axes for the periods between the adjacent epochs (3 years) and between each epoch and the initial epoch of measurements in 1998. Horizontal movements between 5th measured epoch and the initial epoch (in red) and between 5th and 4th measured epochs (in green) are shown in figure 4. 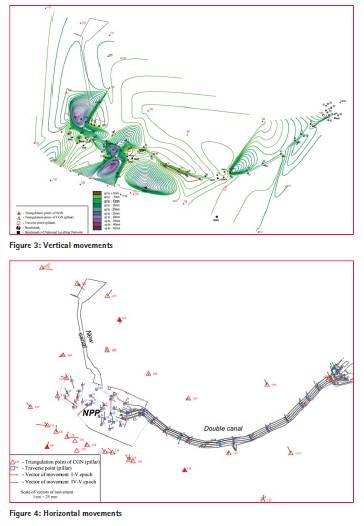 Determination and analysis of deformations 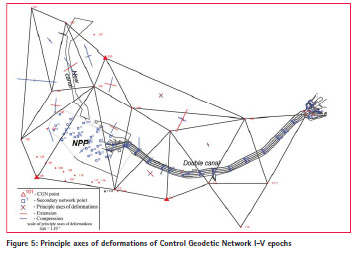 Horizontal movements of the CGN are with various directions and no trend is found. Displacements of half of the points are over 30 mm as maximum displacement is 48 mm.

The accumulated isotropic deformations between any two adjacent epochs and between initial and final epoch are analyzed. The maximum deformation of almost all finite elements is below 10-4, but for many, they are even below 10-5. Deformations are diverse in character and direction.

The results of the measurements, data processing and analysis confirm that there is a deformation process in the area of the Kozloduy NPP that is slow and has a variable character. Movements established indicate possible weak geodynamic processes and phenomena. The vertical displacements are not of the same order with the horizontal – vertical are almost an order of magnitude smaller. Deformations established between neighboring epochs are so far below critical values. The situation for now is relatively calm. Our opinion is that there is currently no reason to prescribe any special measures on the safety of the Kozloduy Nuclear Power Plant.

Based on the above analysis the following recommendations can be made. Geodetic measurements should continue with greater frequency. It is appropriate in the future to carry out measurements at least every two years. The most favorable time for such measurement is late summer and early fall. In addition to regular measurements extra measurements could be possible. The most important circumstances that need to carry out such measurements are: various natural disasters (earthquakes, heavy rains, floods, storms, prolonged drought, etc.); abnormal weather conditions; emergency; after repair of equipment; high water level of the river; increased seismicity; activation of geodynamic phenomena.

The results of the measurements can be analyzed and interpreted in close cooperation with specialists from different professions and representatives of various fields of science and technology. Our information must be correlated with seismic and tectonic one. If more measuring epochs are available a regression analysis and relevant prediction of the displacements and deformations are possible.