Digital images collected form airborne or space-borne sensors often contain systematic and non-systematic geometric errors that arises from the earth curvature, platform motion, relief displacement, nonlinearities in scanning motion, the earth rotation, etc . [1]. The intent of geometric correction is to compensate for the distortions introduced by these factors so that the correct image will have the highest practical geometric integrity.

Systematic distortions are well understood and easily corrected by applying formulas derived by modeling the sources of the distortions mathematically. Random distortions and residual unknown systematic distortions are corrected by analyzing well-distributed ground control points (GCPs) occurring in an image. In the correction process numerous GCPs are located both in terms of their two image coordinates (column, row numbers) on the distorted image and in terms of their ground coordinates (typically measured from a map, or GPS located in the field, in terms of UTM coordinates or latitude and longitude). These values are then submitted to a least squares regression analysis to determine coefficients for two coordinate transformation equations that can be used to interrelate the geometrically correct (map) coordinates and the distorted-image coordinates.

After producing the transformation function, a processing called resampling is used to determine the pixel values to fill into the out matrix from the original image matrix. The process is performed using the following operations.

1. The coordinate of each element in the undistorted output matrix are transformed to determine their corresponding location in the original input (distorted-image) matrix.

There are four different levels of geometric correction of remotely sensed imagery.

(a) Registration- alignment of one image to another image of the same area.

(b) Rectification- alignment of image to a map so that the image is planimetric, just like the map; also known as geo-referencing.

(c) Geocoding- A special case of rectification that includes scaling to a uniform standard pixel GIS.

(d) Orthorectification- Correction of the image, pixel by pixel for topographic distortion [2]

Image rectification is carried out in this work that is CORONA image of Yangon region is rectified to a georeferenced IKONOS image which has UTM coordinate using ERDAS IMAGINE software. The following GCPs configurations are considered.

Configuration 1: GCPs are well-distributed and their corresponding locations are easily identifiable in both images.

Configuration 2: GCPs are not welldistributed, but their corresponding locations are easily identifiable in both images.

Configuration 3: GCPs are welldistributed, but their corresponding locations are not easily identifiable in both images.

Configuration 4: GCPs are not well-distributed and their corresponding locations are not easily identifiable in both images. 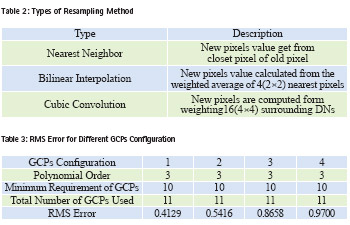 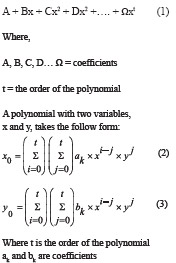 The following first-order polynomial transformation equations can be used to determine the coefficient required to transform pixel coordinate measurements to the corresponding other coordinate values. 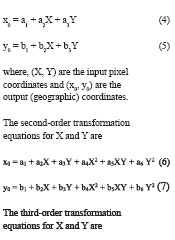 Depending on the geometric distortions, the order of polynomial is determined. Usually a maximum of third-order polynomial is sufficient for existing remote sensing images [1].

As the image to be rectified is highly distorted, third order polynomial transformation is chosen in this work. Based on equation (10), minimum numbers of GCPs should be at least 10 GCPs. Total number of GCPs chosen for this work is eleven. 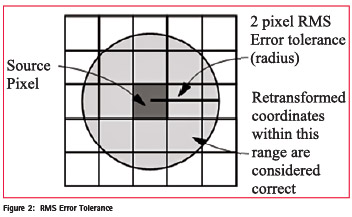 Once applying geometric transformation, image may be shear, rotate, transformed or skewed. Pixel interpolation is necessary for filling missing values of area. For that pixel brightness values must be determined. There may not be any direct one-to-one relation between base image and image which is rectified. There is mechanism for determining the brightness value, this process is known as pixel interpolation.

Resampling process used to determine the digital values to place in the new pixel location of the corrected output image, this process known as a resampling. Resampling required to estimate a new pixel between existing pixels due to non-integer transformed (x, y) . Table 2 shows types of resampling method [2] .

RMS error is calculated with a distance equation:

The amount of RMS error that is tolerated can be thought of as a window around each source coordinate, inside which a retransformed coordinate is considered to be correct (that is, close enough to use). For example, if the RMS error tolerance is 2, then the retransformed pixel can be 2 pixels away from the source pixel and still be considered accurate [3].

The first GCPs configuration is that GCPs are located at the places where they are easily and accurately identifiable in both images and their distribution is even across the image.

The second GCPs configuration is that GCPs are put at the points which are distinct, but they are not well distri buted across the image.

The third GCPs configuration is that GCPs distribution pattern is uniform across the image but they are not accurately identifiable.

The last GCPs configuration is that GCPs are not well distributed and their corresponding locations are not distinct.

Finally, the results on geometric rectification are evaluated by using the total root mean square error (RMSE). Based on the result, it shows that RMSE is the lowest in the case where GCPs distribution pattern is uniform across the image and their locations are at road intersection, building corner, and distinct natural features. RMSE is getting higher on GCPs configuration two to four by order. The worst case is that RMSE is the highest where GCPs distribution pattern are not evenly spread across on both images and their corresponding locations are not distinct.

In conclusion, based on experimental result, geometric correction accuracy of distorted image depends not only on the location of GCPs where they are placed at easily identifiable places (building corner, road intersection, etc.), but also on their distribution (evenly spread across the image).