Tokyo metropolitan city is divided into 23 wards. Shibuya-ward is one of them and is in the western part of central Tokyo area. It is now famous for pop-culture and information technology companies complex. But when the Meijirestoration about 150 years ago was done, about half of Shibuya-ward area was a kind of farm belt. The rest of farm region in Shibuya-ward was the “Samurai”, a warrior, house district. The land-use in this area was at first transformed to dairy and pasture, horticulture farm growing tea leaves or mulberry leaves for silkworms. It is because of abolition of Samurai warrior class and abrogation of feudal load’s alternating “Edo”, the old name of Tokyo, residence. In addition, there were changes in eating habits also. There are changes in diet from fish and soy beans into meat and dairy products. After that, there are some opportunities to change the land use in this area, such as construction and opening of railway to the central area, tap water supply, the “Kanto” region great earthquake, increasing populations, World-War-II and its damages, changes of industrial structure, the Tokyo-Olympic- Games, the miraculously swift growth of the economy, etc. The old maps, aerial photographs and continuous surveying, will be able to explain the driving forces of land use changes and to lead to the well understanding of growth or prosperity of cities. Photointerpretation is the key to obtain a cause of such kind of land use changes. The web-based Geographic Information Technology is the way how to hold in common among the people. 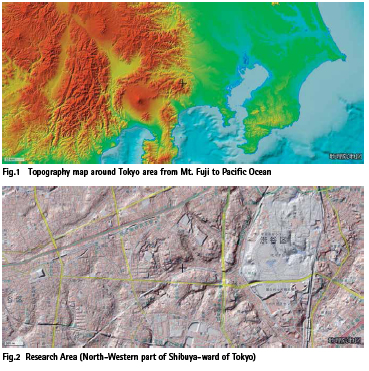 The Meiji restoration, the end of the Tokugawa Shogunate

The Edo-era, the Tokugawa Shogunate times, most of Yoyogi village was farmer’s fields. The Koshu highway, main road from Edo to Kofu, where was the backyard of Edo and very important place for the Tokugawa Shogunate. So this main road was one of the main routes of transportation of goods. The north edge of Yoyogi village was along this Koshu main road. The eastern part of Yoyogi village was Samurai warrior’s residential area. There were some housing grounds for the lords of feudal clan the in the Edo era. Yoyogi-Shibuya area was the second or the third residences for them. The land-use in this area was at first transformed to dairy and pasture, horticulture farm growing tea leaves or mulberry leaves for silkworms. It is because of abolition of Samurai warrior class and abrogation of feudal load’s alternating Edo residence. In addition there were changes of eating habits also.

But the population of Tokyo was soon restored and increased. Samurai warrior’s residential areas were converted into the Emperor’s milking farm, school yards, Red Cross hospital and military drill field. The land use of western part of Yoyogi village was milking farm for the central Tokyo inhabitants and tea farm and vegetables farm. The milling industry of wheat and rice polishing using water wheels along the Tamagawa or Mita agricultural water way. After the Tokaido railway line was opened and electricity power supply was started, tea leaves came from Shizuoka along the Tokaido railway. The tea farm and water wheels milling industry declined. 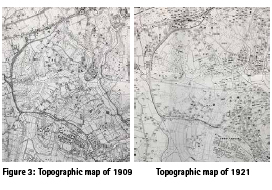 People had kept away from meat-eating life influenced by Buddism until the Meiji Restoraion. After the Meiji Restortion, people’s eating habits were changed into the Western style, such as drinking milk, eating dairy products, and meat-eating. There were much of dairy farms in the north-western part of Shibuya-ward, but those were relocated to the suburbs soon after housing-land development. There were also many factories along the “Koshu” main road. And there was the water supply open channel, “the old Tamagawa aqueduct” and its new waterway in the Hatagaya area, the north part of Koshu main road. (The Yoyogi village was located at the southern Koshu main road area and in the southern Tamagawa old aqueduct.) This “new-Tamagawa water supply open channnel” divided into two regions of Hatagaya area. The Yoyogi-Oyama, Nishihara, Uehara area were owned by the few landholders, such as Mr. Takayoshi Kido, one of the statesmen who made an outstanding contribution to the Meiji Restoration. They dreamt to run a large farm as a Western-style farm management. Those factors influenced the growth of the Yoyogi village. Some followers of Mr. Kido possessed those region for a large scale of land. They were the captain of the industry.

The private railway lines, such as “Keio” and “Odakyu”, set up railway transportation service after about 50 years from the Meiji Restoration and public water supply started by the municipal government. Because Yoyogi village combined with the next village, Hatagaya village and it formed Yoyohaya Town, but not the old Tokyo city area. The Kanto great earthquake also occurred during this time. This region is suitable for residential area as a western edge of the central Tokyo city and the solid ground.

Some places were sold in parcels as residential areas. Those housing lots were comparatively large. Because most parts of this area were owned by the large-scale landowner above mentioned. Besides that, most of the new residents of sale of the land were returnees from the overseas, such as European countries and The United States. They built Western style houses with a bathroom, bed-room, air-conditioner and garage, sometimes with a swimming pool and lawn tennis in the yard, maybe without Japanese “Tatami” floor. 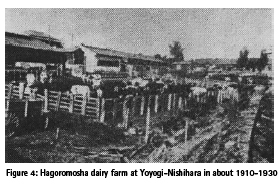 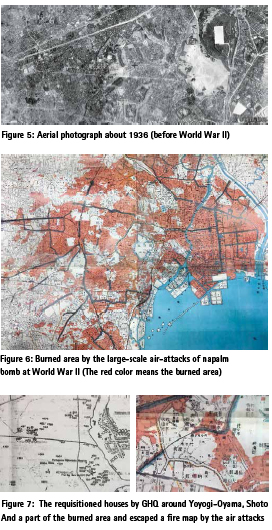 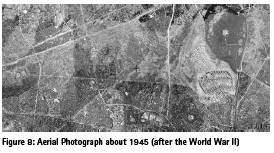 Large scale air attacks by napalm bomb happend during March, April and May in 1945 to Tokyo city. But the western Yoyogi area (Oyama, Nishihara, Uehara, Tomigaya) were not burned by the bomb. Because this area was sparse and covered with rich green and most of the houses were of Western style and near the Washington-heights, the residence barracks of middle-ranking officers. So many houses (over 200) were requisitioned for occupation forces (GHQ-SCAP).

Japanese inhabitants might feel the gap between the rich life of Americans and poor Japanese. Because they lived in the big house with bathrooms, air-conditioners, swimming pool or tennis court and kept a big dog. After the military occupation, there were many company-owned apartments in this area. the companies included large enterprises. 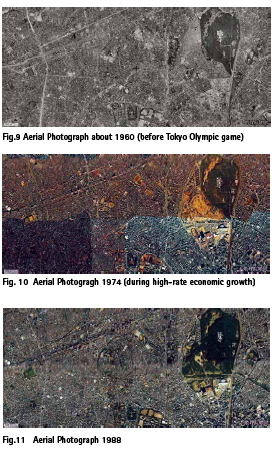 The residents were including returnees from overseas, such as European countries and United States as like before the war. They brought progressive and go-ahead spirit from overseas. This reformed the “Shibuya” stylish temperament in the present.

There was a dormitory for the Indonesian students studying in Japan supported by the Japanese government as the compensation of World War II at Yoyogi-Oyama. Because there might be the Tokyo Mosque near the dormitory.

The driving forces of land use changes in this area are (1) Agricultural land use change by the drastic transition of eating habits in the beginning of Meiji Restoration, (2) Construction of railway and increasing demand of housing after the Kanto great earthquake (3) Large-scale air-attack of World War II and requisitioned houses by GHQ (4) Hosting Tokyo Olympic Game and high-rate economic growth. The author can find land use changes and its driving force by the historically social-economic growth through the analysis in this part of Tokyo metropolitan area. But the similar land use change can be happened in the South-Eastern Asia. It can generalize a conclusion drawn from such highly specific analysis in the specific land use changes. If the georeferenced aerial photography and old maps in tine-series are overlaid and we could see such image and maps in the same browser just like Geospatial Information Authority of Japan Web Map, we could analyze the factor of land use change in another region, another city.

Sato, Y., 2006, A picture explanation of Tokyo for the days under the Allied Occupation Forces(in Japanese), Kawade-shobo-shinsha, Tokyo

Yamamoto, I., 2003, A tornado of Washington Heights (in Japanese), Kodansha, Tokyo