Each community has the duty to conserve, identify and properly manage its own heritage that, unfortunately, is often susceptible to transformations due to time, anthropogenic factors or damages caused by natural phenomena. Innovative geomatic techniques, when correctly integrated among them, can provide a valid solution for an accurate, fast, safe and especially rich documentation of the build heritage. In this way, 3D geometric models of complicated monuments can be created and enriched with a wide range of information. Such models can reach an extremely high degree of completeness the existed building is surveyed in all its details, both internally and externally, even by air using proximity surveying. This integration permits reaching high quality as a result of the combination between the visual potential of the images with the high accuracy of the geometric surveying. This paper though, illustrates how the traditional surveying has been combined with GNSS, laser scanning and photogrammetry in order to experiment the accurate documentation of two monumental buildings located in L’Aquila, central Italy.

The first building of this experiment is the old monastery of “San Basilio” firstly built in 496 A.C. [1]. According to historical notes, the building has been founded by the monks of S. Equitius as a monastery dedicated to the Benedictine nuns of the cloister. In 1703, following a violent earthquake, the monastery’s facade has been seriously damaged and rebuilt, additional modifications to its original plans have been made too. During the 17th century, a severe restoration with many complex architectural changes has been made during which the building has assumed the character that still distinguishes it. Then, in 1993, the University of L’Aquila has entered into an agreement with the Municipality for the use of the building for institutional purposes. The building was finally completed in 2008, just a year before the tremendous earthquake that considerably damaged it in 2009 (Figure 1). 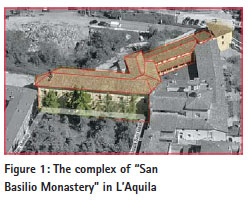 The second one is a medieval Unesco protected site always located in L’Aquila, the St Mary of Collemaggio (“Basilica di Collemaggio”). The building presents a long and important history as has been headquarter of Pope Celestine V, who also rests in the church. Constructed between 1280 and 1289 by the Celestine Order, Basilica features an elegant Romanesque facade with a central door and two smaller flanking doors on each side. Internally, the church follows the standard plan of a nave and two side aisles each one divided from it by a row of columns. A row of arches support a tall wooden ceiling that covers a beautiful floor made in the same red and white stone as the facade. Great part of the monument was also seriously damaged in the 2009 earthquake. While the church’s front is intact, its cupola, transept vaults and the triumphal arches have completely collapsed (Figure 2). 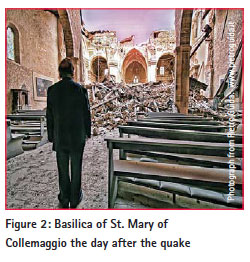 Laser scanning and photogrammetry certainly provides powerful, rich and detailed data. However, in order to achieve a notable metric accuracy of the final model, a network of ground control points is needed. This network consists of numerous targets with known coordinates referred to a local reference system. The whole quality of final model then depends on the precision and accuracy of the so-called ground control network. To establish it, a gridding networks is initially set up by using GNSS surveying in static mode. Starting from the vertexes of the gridding network, a 3d geodetic survey is made to calculate the coordinates of all GCPs. These coordinates are finally used to georeference any data like point clouds or photogrammetric sets. In order to achieve results of high quality an adequate planning of the network is needed both to evaluate its functionality, redundancy and to estimate the a priori values of the standard deviation. With these values, a statistical adjustment of all measurements can be made correcting the data, detecting eventual errors and assigning the standard deviations at all points. Finally the whole network undergoes statistical tests that prove its accuracy (chi square and data snooping). Figure 3 presents the gridding and surveying networks of the San Basilio Monastery while figure 4 presents the gridding and surveying network of “Basilica di Collemaggio”. 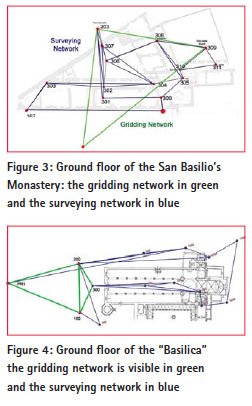 In addition, the final surveying networks of both cases are presented in figure 5. Totally, 112 control points have been calculated for the first case (San Basilio) while around 60 control points have been used for the “Basilica Of Collemaggio”. The precision after the statistical adjustment has been found for both geodetic networks around to four tenths of a millimeter (0.4mm).

During the last decade both the terms “surveying” and “representation” are accompanied by the adjective “digital” that has revolutionized the documentation of the cultural heritage. Laser scanners represent an excellent surveying instrument that has been proven to be versatile and able to offer effective three-dimensional representations of the elements present in its field of action. The advantage of using a device such as the laser scanner is that not only the coordinates but also information connected to their radiometric characteristics can be determined and archived. Even though laser scanning is an apparently simple type of survey, numerous issues need to be considered in order to achieve data of significant quality. Firstly, the complexity of the old monumental structure raises the need for a satisfactory projection of the whole survey in order to adequately cover the structure. The network of the ground control points also has to be adequately projected in order to permit sufficient constraints among the various clouds for their registration and following georeferencing. Thus, in the case of “San Basilio, the exteriors were detected using 10 point clouds and 10 paper targets using a high resolution scanning (grid of 7mm) while for the interior around 105 point clouds and 60 targets with a grid density of 15mm. Figure 5 illustrates the global point cloud of the building (San Basilio) while in figure 6 the first map of the building’s ground floor is presented.

Interrogating the final model, maps for all floors as well as prospects and sections have been created too, figure 7 illustrates the main facade’s prospect.

Having a 16 and a 14 meter tall facades respectively, a study of their verticality was also possible and interesting. Thus, using the rich information included in the already registered and georeferenced global model, the coordinates of all points belonging in both facades have been extracted in a simple txt file. After roto-traslating the origin of the reference system in order to orientate one of its axis parallel to each facade, the obtained modified coordinates have been introduced in a commercial surface plotting software. This elaboration consisted in interpolating all points to create a triangulation, noise reduction, surface mesh and finally the splines that led to the final dimensioned drawing. Figure 8 presents the contour map of the created drawing.

UAV and photogrammetry of proximity

Even though the obtained results offered a satisfying documentation with an interesting accuracy of the metric layer, there are still some parts of the building that remained hidden. Areas of bad visual such as wall portions at the taller parts of the building, as well as the roofs, still contain valuable structural information needed in order to achieve a complete documentation. To encounter these difficulties, unmanned aerial vehicles equipped with both optical and IR sensors can be employed. The new-born so called photogrammetry of Proximity is then operated using the traditional surveying principles. A set of images are being captured from pre-designed positions, so guaranteeing optimal overlapping and distances both from the ground and from the object. Using dedicated software, the digital camera is being calibrated and both the internal and the external orientation parameters are obtained. After mosaicating the photograms obtained from at least two positions, a stereoscopic pair can be created and used to obtain a Digital Surface Model (DSM). Figure 9 illustrates the ANTEOS MINI UAV during an acquisition at the facade of “Basilica”. In addition, figure 10 shows the results of the first experiments using an on board IR sensor.

The developments achieved in the field of geomatics during the last decade are definitely significant. Powerful sensors like laser scanners and compact light cameras, integrated with remotely commanded aerial vehicles, extend the limits of surveying opening new horizons for the documentation of the built heritage. Surveying becomes always faster, more accurate and safe even in extreme situations like the post hazard emergencies.

In this paper, the laser scanning technique correctly integrated to precise geodetic networks has been tested in two monumental buildings. Both the obtained 3D models featured global metric precision up to 5mm. Even if numerous hypothesis connected to the various elaboration routines have been made, the overall results appear to be rather convincing. Thus, the presented methodology can be considered ideal for the architectonical and structural documentation of such buildings both for the satisfactory quality of the final data and for its versatility. On the other hand, the experience of the Photogrammetry of Proximity using UAV, even if presented extremely encouraging also showed the need to improve some aspects, both technical and scientific, as the DSM extraction, the flight’s stability and the payload. Thus, the future developments will aim to define the photogrammetric data elaboration, evaluate and exploit the use of the IR data and overally improve this surveying technique. With reference to the Laser Scanning, another aspect that also has to be defined regards the ability to recognize exactly the same point, permitting in this way also its use in monitoring applications.