Designing Land Registry-Cadastre Data Theme (TRGIS.TK) is presented and discussed in this study. This data theme is one of the base geo-data themes of Turkey National GIS (TRGIS) (Figure 1). Requirement analysis was carried out as part of TRGIS initiative. As a result of data requirement analysis of TRGIS stakeholders, ISO 19152 Land Administration Domain Model (LADM) was used and discussed as the base international standard in developing TRGIS.TK data theme standard. Features of INSPIRE Cadastral Parcels data theme were also taken into account. In addition, scientific studies (Kaufmann and Steudler, 1998; UN-ECE, 1996; van Oosterom et al., 2006; Inan et al., 2010) and data modelling foresights of TAKBIS were considered.

To support GIS applications, TRGIS stakeholders and various users need to share cadastral (land administration) data on the electronic network, which make this study and related future development very important. This article is adapted from a previous study (Aydinoglu and Inan, 2014).

Geo-data sets all over the world and also in Turkey were not produced to solve application driven requirements in various GIS projects and not designed to enable geo-data interoperability. Using interoperable geo-data sets on GIS applications will satisfy public institutions, private sector, research institutions, and citizens. However, technical, standard, and policy deficiencies cause problems on data production, management, and sharing.

In 2011, within Ministry of Environment and Urbanization, the General Directorate of GIS was established to coordinate all GIS activities and determining standards to build TRGIS. Framework legislation about TRGIS building and management was accepted and published recently in March 2015. TRGIS framework legislation includes TRGIS vision, aim, and definitions. TRGIS administrative structure with units, principles, and duties was defined to coordinate all TRGIS activities. TRGIS geo-data themes with definitions were determined. Principles about TRGIS metadata, network services, and interoperability were explained.

TRGIS project’s aim is to determine TRGIS related legislation and to determine geo-data standards for TRGIS geo-portal. To develop geo-data standards, case and requirement analysis were utilized to all stakeholders of TRGIS, including 15 ministries, 86 general directorates, 88 departments, and 118 branches. As a result of fieldwork and workshops, 254 information products as map, application, and product were analyzed. 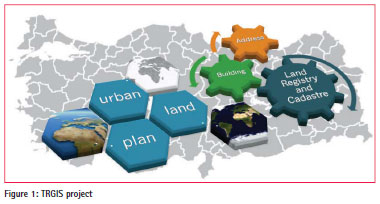 TRGIS can be accepted as a base and the domain geo-data model (see Figure 2). Different public institutions and sectors can share data sets based on TRGIS data themes. For example, Land Registry and Cadastre Data Model (TAKBIS), as a sector model, manages all cadastral data sets and activities in General Directorate of Land Registry and Cadastre (TKGM). TAKBIS should share Parcel and Ownership data sets with TUCBS.TK land registry and cadastre data theme, because other users need these data sets in their applications.

TRGIS geo-data themes, using UML application schemas, provide logical data structure for any geo-data theme, independent from platform and implementation. These UML schemas were encoded to Geography Markup Language (GML) accepted as a base of geo-data exchange format of TRGIS. 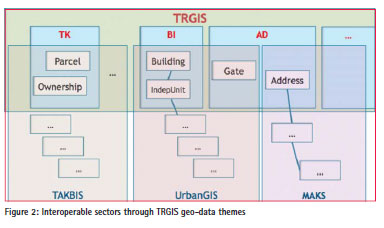 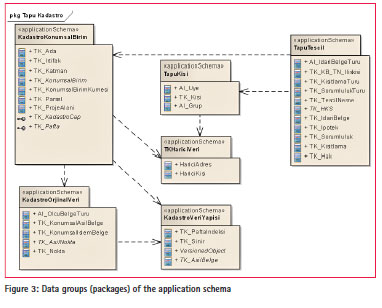 The following methodology was used in the analysis stage for TRGIS.TK;

– Existing Data Analysis was carried out by examining TAKBIS geo-database.

– ISO 19152 LADM was determined as the base international standard.

– It was determined that within 10 ministries, 24 general directorates, 25 departments, and 77 sub-departments, there were 77 map/applications using or producing land registry and cadastre data (59 of them were existing applications and the others were suggested ones) (GD-GIS, 2012b).

– A gap analysis was carried out that compares and evaluates the results of data requirement and existing data analysis.

During model development, extensions to LADM were focussed. Because the original language of the modelling was in Turkish, diagrams and all their content were presented in Turkish.

In connection with the LADM, the content of TRGIS.TK covers the following (GD-GIS, 2012c);

– Spatial units registered for constituting immovable or a part of immovable were even not registered (see KadastroKonumsalBirim package in Figure 3),

– Immovable objects registered in land registry that define rights on one, more or a part of whole spatial units (see TapuTescil package in Figure 3),

All model components are presented in Figure 3. However, only spatial aspects of model design are presented in the rest of the article. In this respect, as sub classes of TK_KonumsalBirim (LA_ SpatialUnit) class, TK_Parsel (LA_ Parcel), TK_KonumsalBirimKümesi (LA_SpatialUnitGroup), TK_Ada (a group of land parcels surrounded by natural or manmade barriers), TK_ProjeAlani (a group of land parcels within a land management project) and TK_Irtifak (spatial location of an easement right within a land parcel) classes and also TK_ Katman (LA_Layer) class, are included. Bina (LA_Building) and BinaBlok (LA_ BuildingBlock) classes come from a different TRGIS data theme (see Figure 4). 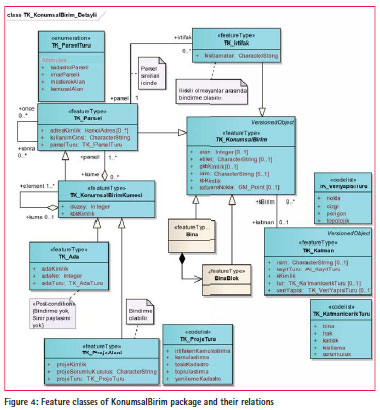 TK_Irtifak (easement) class was defined as a kind of spatial unit in order to represent an easement right within a land parcel designated spatially with certain boundaries. It should exactly be within the boundaries of only one related land parcel (see Figure 4).

TK_Ada class was defined in order to represent a group of land parcels surrounded by natural or manmade barriers as an area which is the basis for planning, application (land management) activities and also for unique parcel numbering. TK_ProjeAlani class was defined as another kind of spatial unit group in order to represent boundaries of different land administration or land management project areas. Other kinds of project types (expropriation of easement right, expropriation of land, first cadastral surveys or renewal projects and land consolidation) were defined in TK_ ProjeTuru definition class (see Figure 4).

This study shows that LADM is a good template for further model development to meet county specific needs on land registry and cadastre-related development issues. In fact, all LADM classes, properties, relations, and also methods were examined and adapted to TRGIS. TK geo-data theme, and only exceptional ones were presented in this study as original contribution to LADM. However, for some rare cases, LADM should be revised for the adoption of a specific country. In this context, LA_ Building and LA_LegalSpaceBuildingUnit classes were replaced with external data sources. Similarly, LA_Point was revised in terms of included point types.

This study reflects contribution to LADM only in terms of the needs of TRGIS stakeholders. For full contribution, all land registry and cadastre process should be considered and presented as the Turkish country profile.

Easement as a spatial unit and group of land parcels surrounded by barriers (in Turkish Ada) may be considered as international contribution to LADM. Other extended contributions are specific to Turkey. Application of TRGIS.TK geo-data theme is dependent on the application of both TRGIS and also accessibility of required quality data within land registry and cadastre organisation. In this stage, GML conversion of the model was carried out with some difficulties, which cause the loss of some modelling content. A pilot study for the implementation of the proposed model has been continued.