Malaysia has a marine jurisdiction of approximately 574,000 kilometres2 (CheeHai & Fauzi, 2006) and is looking to implement a marine cadastre. To do this, the low-water line needs to be determined. This research investigates an efficient method to determine the low-water line and subsequently investigates Malaysia legislation and coastal policies and their effect on the maritime baseline, and finally makes recommendations regarding the management policies for a maritime baseline.

The method applied in this research requires near-shore Digital Terrain Modal (DTM), bathymetric DTM and tidal information to be obtained in order to derive a low-water line (Figure 1).

Kames Bay, Millport, Scotland was identified as the case study area. It has both a steep rocky section at its sides and a low angled sandy section. It is also the site of a fully instrumented tide gauge allowing cross-calibration of tidal characteristics to the DTMs. This case study area is comparable with parts of the Malaysian coastline, making the tested methodology easily transferable.

The DGPS and echo sounding fieldwork was carried out to acquire a terrestrial DTM and a bathymetric DTM of Kames Bay on June 7, 8, 2012, across a spring tide at Millport. The land elevation data was collected using a Leica GPS1200 and a Leica Smartnet with a GS08 Antenna. The bathymetric data was collected using a 5.5m rigid-inflatable boat (RIB) vessel with a 0.4m draught carrying a SONARLITE echosounder linked to a Leica Smartnet rover. The data produced a large overlapping area (MHWS-MLWS) of approximately 150 m from the two sets of DTM (Figure 2). 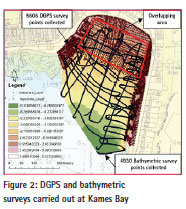 Spatial and statistical analyses were carried out to validate the DTMs generated from the fieldwork by extracting the cell values of the land topography and bathymetry data at each DGPS point to compare with DTMs from ASTER, SRTM and NEXTMap. The following analyses were made with the assumption that the DGPS DTM produced here is of a higher level of accuracy (standard deviation of each DGPS height point collected averaged ~ 8mm) than other DTMs and will be used as a reference dataset against which comparisons will be made.

Table 1 shows that the DGPS and bathymetric data have a strong relationship with a relatively high correlation and low RMSE. The high correlation between the DGPS values and echo sounding elevations in the area of overlap provides a high confidence in the echo sounding results further offshore, where the measurements using other data sources could not be validated. Meanwhile, among t he third party DTMs, NEXTMap which has the highest resolution is significantly more precise and accurate than ASTER and SRTM. However, despite the reasonably good correlation with NEXTMap, its data does not extend beyond the low-water line region, implying that the time of data collection was not the most appropriate for this purpose, thus limiting its usability

Despite their global availability, analysis shows that neither the ASTER nor SRTM datasets are a suitable use for determining the marine baseline. Although not analysed here, marine LIDAR shows much more promise at covering extensive areas of coastline with the required accuracy, but with significant costs involved. 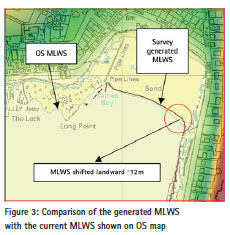 The generated MLWS location was then compared to the MLWS location shown on Ordnance Survey (OS) raster map and it showed an almost identical line with a slight shift landward ~12m at the southeast of Kames Bay (Figure 3).

The LAT generated from the bathymetric DTM was then compared to the 1:12,500 Leisure Chart 5610.1 (published in 2005). The LAT line generated indicated that the seabed which was once shallower (depth value 07 and 09) in the northwest and southeast of Kames Bay has retreated landward by approximately ~72m and ~94m, respectively (Figure 4). This suggests that changes have occurred in the mobile near the shore. The UK Hydrographic Office (UKHO) confirmed that the LAT line represented on the admiralty chart was surveyed by HMS Gulnare in May 1940 and that information has not been superseded (Hannaford, pers comm, 2012). Admiralty charts adopted LAT as chart datum from 1968 (Burningham & French, 2008), yet the current LAT line shown in Chart 5610.1 has not been revised since the 1940 survey. This suggests that particular sections of Kames Bay have been eroding at an average rate of more than 1m per year over the last 72 years (1940-2012). This is not an unusual rate of movement within the lower intertidal on the Scottish coast, mostly driven by sea level change and dwindling sediment supply (Hansom, 2010). 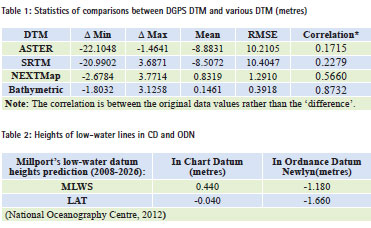 One of the concerns brought about by global warming is sea-level rise. According to the United Kingdom Climate Projection (UKCP09) produced by Department for Environment, Food and Rural Affairs (DEFRA) for a 95% high estimate emissions scenario for Millport, in 2025, the change in relative sea level (RSL) is ~0.152 m; and in 2100, the RSL will be ~0.714 m (DEFRA, 2012). Provided nothing has changed in the mobile nearshore, the shift of LAT position from 1940 to 2100 is show in Figure 5.

Environmental and economy impact of a receding low-water line

In addition to the implications to the marine cadastre of a shifting baseline over time, the movement of LAT has important environmental consequences. It is well known that the landward movement of MHWS (Mean High Water Springs), otherwise known as coastal erosion, is ongoing as a result of sea level rise and sediment deficiencies on coasts worldwide. What is less obvious is the often unseen and unrecorded landward movement of LAT that results in loss of coastal intertidal habitat as well as loss of intertidal sediments and thus, a steepening of the intertidal zone (Hansom, 2010). Changes to the gradient and sediment composition of the intertidal may ensue since deeper water will promote enhanced wave activity, the result of which may be an elevated erosion and flooding risk and calls for artificial coast protection structures as well as accelerated loss of intertidal habitat.

Marine cadastre in Malaysia emphasises on the accurate spatial determination of marine parcels within its international maritime boundaries. However, its implementation is still at a rudimentary stage. One of the prerequisite of marine cadastre is to clearly identify its spatial extent within Malaysia’s marine jurisdiction. Therefore, the effective determination of maritime baseline which defines the outer limits of individual state (negeri) maritime jurisdiction is of paramount importance.

For a land cadastre, the boundary marks depicting the limit of the cadastre parcels are surveyed and demarcated on the ground. Its physical location is static, although its geographical coordinates might change due to a shift in horizontal land datum caused by natural phenomena such as earthquakes. Such events only result in the recalculation of new coordinate values for the boundaries of a land cadastre parcel without physically shifting the parcels, or altering their existing limit. Compared to land cadastre, a marine cadastre boundary is delimited (not demarcated) from the low-water line and generally there is no physical evidence, only mathematical evidence left behind (Carrera, 1999). However, the dynamism of the coastline determined by, among other things, sea level, waves, currents, winds, and the added issues of coastal erosion and deposition over time, may all cause the baseline to migrate over time. To avoid spatial uncertainty, constant determination may be thus required.

The Malaysia federal-local states’ maritime boundary has not been defined and even the maritime boundary between local states has yet to be agreed upon. In addition, no maritime baseline has been officially declared for the country, and this has an effect on the level of jurisdiction exercisable between different maritime zones. The technical issues related to a shifting baseline and how it impacts marine parcels or maritime rights within a maritime zone have thus not been addressed.

Currently, there is a legislative gap on the issues concerning the maritime baseline. Five Acts define the maritime limit of Malaysian waters but no single policy or guideline is in place that addresses or even acknowledges the shifting nature of the maritime baseline. The closest legislation to the safeguarding of maritime baseline currently is the ‘Guidelines on Erosion Control for Development Projects in the Coastal Zone (DID Guidelines 1/97)’, but its primary aim is prevention of erosion along the coastline and does not address the complications associated with a shifting maritime baseline or the actions needed to deal with it. Institutionally, many activities that occur in the coastal areas are administered and enforced by a variety of agencies or departments under various ministries or state authorities. No single agency has overall authority over all maritime matters. Likewise, the technical difficulties facing the determination and visualisation of a maritime baseline, coupled with coastal dynamism that threatens baseline stability, has made it impossible to efficiently govern the low-water line without putting in place a proper mechanism involving all stakeholders.

We thank Mr Brian Johnston, Mr Kenny Roberts and Dr Anne Dunlop from University of Glasgow for the survey carried out in Kames Bay, Millport