In Korea, technologies on WA-DGNSS (Wide area differential GNSS) has been being jointly developed by a consortium of universities and research organization in order to construct the system in the near future (Ho Yun et al., 2011 and Ho Yun et al., 2011). WA-DGNSS provides the correction data and integrity information via geostationary satellite to various users, i.e. aerospace, maritime, LBS etc (Fig. 1).

WA-DGNSS comprises Wide Area Reference Station, Master Station and User segment. Wide area reference station (WRS) receives data from the GNSS satellite, performs quality monitoring of decoded navigation data, and sends the correction data to the wide area master station (WMS) via terrestrial communication network. Wide area master station (WMS) processes the data collected from the WRS, and uplinks the calculated correction data as well as the integrity information to the geostationary satellite (GEO). GEO satellite downlinks the correction data to the users such as aerospace, marines, land applications etc for accurate and reliable positioning. In Korea, the nationwide DGPS network (Fig. 2) completed by the MOF (Ministry of Ocean and Fisheries) in Nov. 2002, has been providing the dual coverage service since then. Some of the NDGPS reference stations are being considered for the utilization as the WRS of WADGNSS system. The internet based NTRIP (Network Transport of RTCM via Internet Protocol) service has also been provided to facilitate the DGPS service since Nov. 2002. Furthermore, the so called smart phone DGPS comprising electronic chart, NTRIP server and Bluetooth is expected to be provided in realtime by using the TDMB (Terrestrial Digital Multimedia Broadcasting) network from 2015.

This paper describes the results of design, implementation and validation of WADGNSS reference station software that is being carried out by applying the Object Oriented Programming methodology to provide flexibility in software: ease of model changes (ionospheric delay model), system addition (Galileo, GLONASS in addition to GPS) etc. 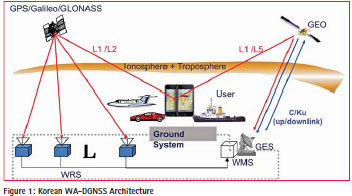 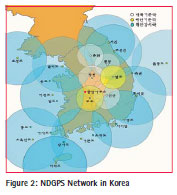 WRS software is designed to support the following functions of the Wide Area Reference Station (Changdon Kee et al., 2011) of the WA

The object oriented methodology is applied for the design of the WRS software that includes Use case diagram, Architecture diagram, Activity diagram and Class diagram. Data transmission from WRS to WMS is also designed to support TCP/IP communication between WRS and WMS. Through the preliminary design phase (Uzair Ahmad et al. 2011 and Wan Sik Choi et al. 2012), UML based use case diagram is designed by identifying 18 use cases to fulfill the WRS functions. Based on the use cases designed, WRS software architecture is designed with 19 components in order to perform the designed use cases. The Activity diagrams (Fig. 3) and Class diagrams (Fig. 4) are generated as the results of the WRS software detailed design phase activities (W.S. Choi et al. 2013).

Validation of the WRS software is carried out in two levels: data parsing level, modeling level. Validation of models such as ionospheric delay, pseudorange residuals etc is currently being carried. Validation of data such as BINEX data parsing has been completed as in follows. First, TEQC toolkit (TEQC) is employed to convert the BINEX data format to RINEX (RINEX) format. Then data generated from the BINEX parser module of the WRS software is compared with those from TEQC toolkit. Fig. 6 shows that the value of Square Semi Major Axis is same for both cases, i.e. values from TEQC and BINEX respectively. 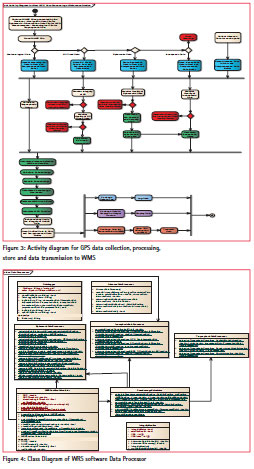 In this paper, results of design, implementation and validation of the WRS software are described. WRS software design is carried out by applying the OOP methodology in order to provide the flexibilities in software. Consequently, the software is implemented using the OOP language C#. Validation results in data level show that the data are processed correctly. Model level validation is currently being carried out. After completing the validation for both levels of data and model, extension of the WRS software will be considered for commercial level applications. 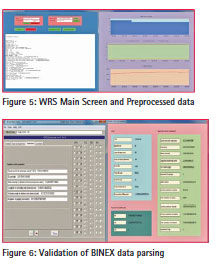