A parking enforcement officer and city clerk are part of an innovative project in Sarasota, Florida. Municipal staff whose traditional daily work has decreased due to the pandemic are spending time on the city’s streets adding crucial data to the map.

As coronavirus disease 2019 (COVID-19) struck Florida, Sarasota began locking down its municipal buildings, and the daily workload of many city employees waned. City manager Tom Barwin sent out a notice to all departments looking for creative ways to productively occupy these workers.

Rockwell worked out a proposal with city IT director Herminio Rodriguez.

“The financial commitment was small from the city, but the return could be huge,” Rodriguez said. “The city could start capturing this massive amount of data that it really needs.” 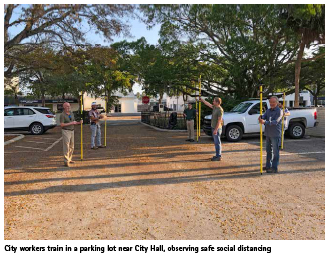 Rodriguez joined Sarasota five years ago to rebuild an IT department from scratch, complete with an enterprise geographic information system (GIS).

Last year, Rodriguez hired Rockwell to rebuild the city’s GIS and update its data. In the past, Sarasota had outsourced its GIS data collection, but the data was never reliable and was now outdated.

“We want to be able to make datadriven decisions, and GIS is a big component of that,” Rodriguez said.

To meet their goals of building a GIS, Rodriguez and Rockwell determined they would need to either update or recreate all the city’s information assets. They had estimated the costs to be in the hundreds of thousands of dollars in outsourced labor over the course of at least five years. But the newly available city staff would be able to perform the work for no additional charge.

Because the city had an enterprise GIS, there were also no extra software costs. The city also had a box of extra iPhones left over from a service provider migration, which could be converted into offline data collection devices. The only cost would be for professional-grade GPS receivers to enhance the iPhones’ accuracy. 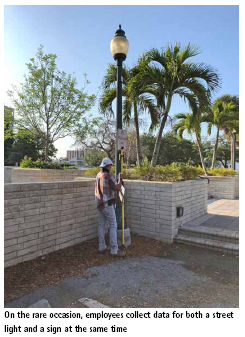 Taking to the streets

Rockwell met with city subject matter experts to decide which asset types to focus on. They prioritized data collection on city streetlights because of the numerous requests for information from outside organizations, such as Florida Power & Light Company and the Florida Department of Transportation. The team also determined that road signs would be easy to map concurrently.

Rockwell handed out reflective vests, printed maps, and markers. The printed map consisted of 28 full or partial grids of the city. This allowed members of the newly improvised data collection crew, most of them not very familiar with GIS, to easily mark off where they had collected data each day.

“Once they’re done, they text or call me, and I can give them a new quarter section to take on,” Rockwell said.

Boost for employees and constituents in a tough time

At the end of each day, after the workers have synced their data, Rockwell assesses the team’s progress. In the first few days, this allowed him to quickly spot any errors, such as photos not collected with the assets, and take corrective action.

Planning technician Billy Cooney had used GIS in the past, but he usually spent his time assisting senior planners, such as by measuring rights-of-way. Now Cooney is committed to spending two days per week doing field data collection.

“I try to help out wherever I can,” Cooney said. “It’s nice that I have a project that gets me out and walking around, especially now that I’m working from home and socializing less.”

The extra hands are helping Sarasota accelerate its planned GIS database improvements while keeping city staff productive during the pandemic.

Overall, response to the project has been overwhelmingly positive.

“I’m thrilled the city is supporting this initiative,” Rodriguez said. “To be able to take employees doing very, very different jobs and put them in the field—this wouldn’t have been possible in a normal environment.”

The article was first published at Esri. com and can be accessed at https:// www.esri.com/about/newsroom/ blog/covid-19-idled-sarasotaemployees- contribute-fieldwork/