There seems to be a general perception that the increasingly ice-free Arctic waterways are safe for passage, when significant areas have not been adequately surveyed. However, as of 2011, less than 10% of Arctic waters had been surveyed to modern standards 2. On 27 August 2010, the expedition cruise ship Clipper Adventurer went aground at 13.9 knots on a rock shoal whilst travelling in a limited surveyed area of Coronation Gulf, Nunavut. This paper reviews the background to this grounding, and the geomatics issues related to the grounding.

With any vessel grounding or offshore incident, but especially where litigation could be involved, the survey, navigation and positioning issues should be considered along with any legal liability issues to ensure the best case is put forward.

The expedition cruise ship Clipper Adventurer, length 100.6 metres, beam 16.3 metres and draft 4.7 metres3 with 128 passengers and 69 maritime crew onboard, was at the end of a fourteen day cruise enroute from Port Epworth to Kugluktuk (the hamlet’s name was changed from Coppermine on 01 January 1996), Nunavut4. The Clipper Adventurer ran aground on a shoal of solid rock with such force that more than half of the vessel’s length was embedded on the rock shoal.5

On 27 August 2010 at approximately 1832 hours Mountain Daylight Time, whilst in transit from Port Epworth to Kugluktuk, and sailing in between the Lawford and Home Islands, the Clipper Adventurer was steaming at 13.9 knots through the area when it grounded on a rock shoal.6 The seas were calm without any wind or swells, and sunny conditions and good visibility prevailed.7 The tide was at its highest and the water was clear.8 There was no appreciable water current.

The grounding led to 13 of the vessel’s double-bottom tanks being breached, some holding fuel, freshwater and sludge.9 The damage was below the waterline and, consequently, the fuel oil was forced to the top of the tank due to the ingress of sea water. As a result, there was no leakage of the oil. The Canadian Coast Guard (CCG) also verified that at the time of grounding there was no sign of oil pollution in the vicinity of the grounded ship. However, several days following the grounding, a light sheen was visible but it dissipated quickly.10

An overhead view of the grounded Clipper Adventurer, which clearly shows the rock shoal approximately 60 metres either side of the vessel is provided in the left Figure 1. A starboard side view of the vessel with a list of 5 degrees to port shown in the right Figure 1.11 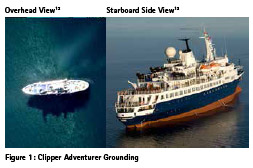 On 8 October 2010, CHS Chart 7777 was corrected by a permanent indication of the shoal and an updated Notices to Mariners (NOTMAR) was issued.14 A revised CHS Chart 7777 was issued on 15 May 2015, which was 57 months after the grounding occurred and is shown in the left Figure 2. The 85 metre rise in the seabed at the face of the rock shoal is shown in the right Figure 2. 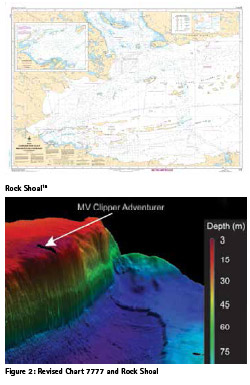 In the 2012 Canadian Transportation Safety Board (TSB) Report there were four (4) pages dedicated to Voyage Planning with the following Table and Figure provided to illustrate three (3) possible routes, which could have been considered by the deck officers on the Clipper Adventurer.17

In 1965, the track of soundings in question generally followed by the Clipper Adventurer, were acquired by the Canadian Survey Ship (CSS) Richardson. The vessel was commissioned by the CHS in 1962 and was paid off in 1990. In 1962, the vessel was fitted with the latest electronic navigation and survey equipment. The vessel worked in the Western Arctic from 1962 to 1969 during the months from July to September. Most of the work was in areas adjoining the Beaufort Sea, except for 1965, when the vessel surveyed the approaches to Coppermine, now Kugluktuk.22 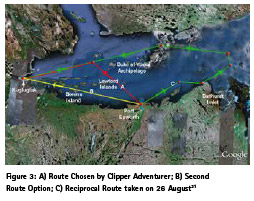 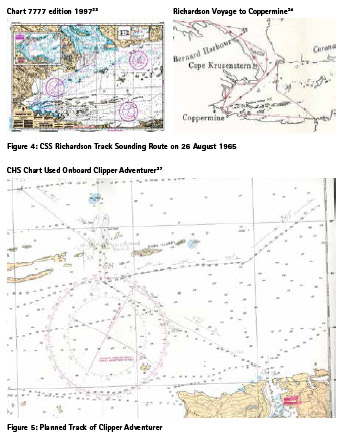 The navigation equipment of interest in the wheelhouse of the CSS Richardson consisted of a Decca Type 404 radar, a Sperry Mark XIV gyrocompass,25 and a Kelvin Hughes MS 26B single beam echo sounder.26

The estimated horizontal error based on using the islands and mainland features as fixed points which were based on uncontrolled aerial photography, was estimated by the CHS to be approximately ± 100 metres or greater.27 The total horizontal positioning error was estimated to be in the order of ± 130 metres.

The Clipper Adventurer used paper charts for navigation, including CHS Chart 7777 edition 1997, on which the desired course was plotted and the waypoints transferred to the route planning software and the Electronic Chart System (ECS).28

The captain had previously completed over 60 Arctic voyages, although never to Port Epworth.33 It was the second year in a row that Clipper Adventurer had sailed in the Canadian Arctic and the Coronation Gulf.34 On 23 February 2010, the extension of the cruise to include Port Epworth was added at the request of the Canadian charterer, as Port Epworth was a geological point of interest.35

In the Arctic, following a track of soundings is common practice due the sparse soundings available.36 In the 1997 edition source classification diagram a magenta dashed line which ran from the south west to the north east through the middle of the chart only contained track and spot soundings. In the 2015 edition source classification diagram this same area, there was an “Inadequately Surveyed” notation added to those parts of the chart.

As shown in Figure 5, following a track of soundings could be an artistic endeavour which is a portion of CHS Chart 7777 edition 1997 used onboard Clipper Adventurer which was produced as a Federal Court exhibit.

On the portion of the planned track on a heading of 301 degrees True, the maximum distance from the track of soundings in question to the planned track was 1,170 metres or 0.63 nautical miles. On this leg of the voyage, based on the CHS Chart 7777 edition 2015, the soundings ranged from 50 to 200 metres.

Further, as shown in the top left hand corner, the planned track proposed to cross an unsurveyed area on heading 310 degrees True to reach a track of soundings to the north. This corresponded to 10,480 metres or 5.64 nautical miles of planned track for which there was no bathymetry data at all.

Unfortunately, the vessel data recorder (VDR) onboard Clipper Adventure was not backed up properly after the grounding.38 Hence whatever course the Clipper Adventure took before and up to the grounding cannot be examined. However, several of the Federal Court Exhibits provide the selected waypoints for comparison which is provided in the next section.

Federal Court exhibit number 21 provided the Voyage Planning Forms used by the Navigation Officer when planning the voyage during the previous cruise in the Canadian Arctic. All of the forms were dated 03 August 2010.

Federal Court exhibit number 139 provided a screen grab of the TimeZero route planning software by MaxSea. Though the start point at Port Epworth may have needed to be changed, the other alterations show that instead of using the planned route from 03 August, on or about 27 August the planned track was changed.

Federal Court exhibit number 140 provided a screen grab of the Transas Navi-Sailor 3000. Unfortunately, there appears that a blunder was made entering the chosen geographical coordinates for Waypoint #5 into the ECS. 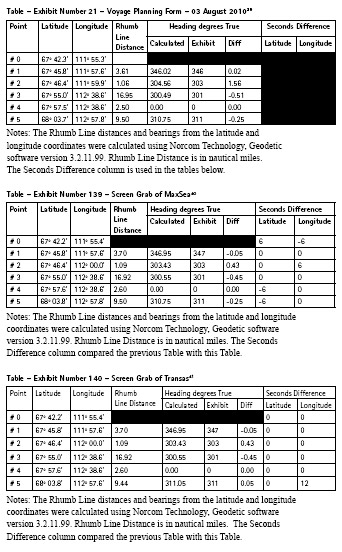 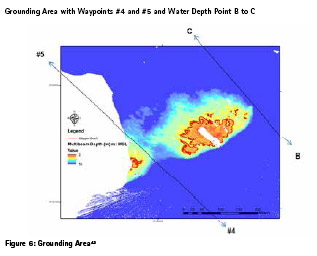 Unfortunately, the various changes to the planned track that occurred on or about 27 August and the blunder entering the longitudinal value for Waypoint number 5, brought the Clipper Adventurer closer to the rock shoal and the grounding location.

Figure 6 shows the multibeam echo sounder data collected after the grounding in the vicinity of the grounding area with the 4.8 metre contour. The line in the lower portion of the Figure is the Transas planned track between Waypoint #4 and #5. The line in the upper portion of the Figure is the line between water depth points B and C.

The survey, navigation and positioning issues which are related to the grounding of the Clipper Adventurer were as follows:

• The master decided to sail at 13.9 knots in a known limited surveyed area, when the voyage plan only required 6 knots which would appear to be arguably reckless.

• Had the voyage continued, the Clipper Adventurer would have sailed 10.5 kilometres over an area which had never been surveyed.

• The Voyage Planning route was not followed but another was created on or about 27 August and when input into the ECS the longitudinal coordinates for the planned track alongside the rock shoal was input incorrectly.

• At the time of the grounding the Clipper Adventure was off track by 142 metres to the East. If the planned track had been followed the vessel would NOT have gone aground

3 Online at Wikipedia for MV Sea Adventurer at: https://en.wikipedia.org/wiki/ MV_Sea_Adventurer (last accessed on 28 March 2018). On 01 October 2012 the vessel was renamed Sea Adventurer and taken over by another company.

15 Low resolution copy of CHS Chart 7777 edition 2015 was provided to the author under licence to the CHS. Not to be used for navigation.

20 Oral deposition of Captain Kenth- Grankvist on 24 July 2012 at page 162, the Master of the Clipper Adventure at the time of the grounding stated that he had decided to travel at that speed to allow himself and the passengers some rest at anchor before having to disembark the next day.

21 2012 TSB Report, Figure 1. A higher resolution image was provided as part of an Access to Information Request submitted to the TSB and answered on 25 April 2017.

23 Low resolution copy of CHS Chart 7777 edition 1997 – Coronation Gulf – Western Portion, original scale 1:150,000, projection: Mercator, datum: NAD83 was provided to the author under licence from the CHS. Not to be used for navigation.

25 Private communication by the author with Seaward Engineering & Research on 27 April 2017.

27 Private communication by the author with the CHS dated 27 March 2017.

39 Federal Court List of Exhibits, Court Number T-901-11, Exhibit number 21, “Clipper Adventurer Voyage Plans”, page 15. The copy for this page was a bit blurry although readable and this was the clearest copy available.

40 Federal Court List of Exhibits, Court Number T-901-11, Exhibit number 139, “MaxSea Route 871 Print Out – Port Epworth to Coppermine”, page 2. The copy for this page was a bit blurry although readable and this was the clearest copy available.

42 Private communications by the author with Ian Church dated 12 May 2017.

43 Image provided to by the author with Ian Church on 15 May 2017. The rectangular white from on the rock shoal is the outline of the hull of the Clipper Adventurer.