Whilst professional mariners stopped using the earth’s magnetic field as their primary directional reference some fifty years ago, civil aviation did not, because at that time accurate inertial navigation systems (INS) were too heavy and bulky for aircraft use.

Today, however, navigation by GNSS (global navigation satellite systems) – backed up by ring laser gyro-stabilized inertial navigation/attitude and heading reference systems (INS/AHRS), radio beacons and air traffic control surveillance using multiple technologies – enables aviation to navigate perfectly without any magnetic reference. The debate about changing from Magnetic to True is no longer about whether to change, but how to manage the change, and when; March 2030 is the proposed date.

Modern civil and military aircraft have the capability to fly to a True North reference at the push of a button: a flight management system (FMS) based on an inertial reference system (IRS) is designed to identify True North at startup, and when a magnetic reference is required, the FMS computes it from True by applying local magnetic variation from embedded look-up tables. Airways and approach procedures within the FMS, however, may use up to four different sources of magnetic variation (FMS, Procedure Design, Airport, or Station Declination) from either the FMS or an ARINC 424 navigation database, and errors occur when these do not match.

With the ubiquitous use of GNSS and the impressive capability of modern IRS, plus the steady decommissioning worldwide of surface-based radio navigation aids, the decision to rely on the constantly changing earth’s magnetic field is increasingly hard to justify. The International Association of Institutes of Navigation (IAIN), which has meticulously studied all the issues, comments: “The biggest single problem in trying to implement this change worldwide would be inertia – the large number of countries involved and the difficulty of finding the will to all change at once.”

To work out how best to overcome this inertia, the IAIN set up a specialist working group, the Aviation Heading Reference Transition Action Group (AHRTAG), which has been meeting monthly since early 2021. The AHRTAG is a Canadian-led multinational team of navigation and avionic experts from the USA, UK, France, the Netherlands, Japan and Australia, and is chaired by Nav Canada’s Director of Operational Safety, Anthony MacKay. The group includes representatives from several national aviation authorities (NAA), major aircraft manufacturers, pilot associations, and also the commercial air navigation charting and aviation information provider Jeppesen.

The migration of the geographic magnetic poles has accelerated in recent years, adding to the relentless task of updating systems and distributing the associated flight information. AHRTAG points out that updating aircraft magnetic variation look-up tables is a specialist and expensive maintenance activity that has no effect on the way the aircraft derives its directional information. It merely ensures the result is displayed as a magnetic value which will incorporate any uncorrected system errors and add them to the originally determined True heading. And if a future variation shift is sufficient to require correction to airport assets – like runway and taxiway signage and markings, plus instrument procedures, landing aids documentation, and FMS coding – at a major hub, the cost can top $20-30 million.

The one-off act of moving from Magnetic to True reference is no more challenging than, for example, the periodic task of re-orientating VOR and TACAN radio navigation beacons to take account of local magnetic variation changes. Across the industry, stakeholders have the necessary skills and knowledge to make the move.

Canada is now actively concentrating on implementing the change: it already references True North in nearly half its airspace because its far-northern territories contain the (slowly moving) surface location of the magnetic North Pole. Aviators in the northern Canadian airspace have employed tried and tested procedures for both traditional radio navigation beacons and all types of performance-based navigation (PBN) systems for decades. The country’s air navigation service provider (ANSP) Nav Canada, working with the AHRTAG, has almost completed drawing up its concept of operations (CONOPS) for the switch to True within the whole of Canada’s airspace.

The International Civil Aviation Organization (ICAO) has shown great interest in Nav Canada’s “Mag2True” work, particularly since Canada presented a White Paper on the subject to ICAO’s 13th Air Navigation Conference (2018), seeking agreement and proposing adoption by 2030. The conference agreed that further study of Mag2True cost/benefit should go ahead – which it has. The agency is hoping to be presented with “ready-made SARPS [standards & recommended practices] and implementation plans to move issues forward”. Meanwhile, ICAO says, Canada presented a formal Mag2True information paper at the HLCC in October 2021, and a presentation by AHRTAG on True North was included in the agenda of ICAO’s European PBN Task Force/ Navigation Steering Group meeting in early December. This month, a brief was given to the ICAO ANC Talk Series which generated significant interest.

Assisting ICAO to overcome global inertia might work like this: one state – Canada – unilaterally files a difference from international heading reference standards, successfully transitions to True North within its entire airspace, and demonstrates that the new system works.

The US Federal Aviation Administration is also warming to the idea. According to FAA sources, the agency’s thinking is moving in much the same direction as Canada’s, recognizing that pilots are accustomed to operating despite differences that come into play at a border. For example, most of the world measures flight altitude in feet, or thousands of feet, but in China, the Russian Federation and a few other states, altitudes below the transition level are in metres.

To sceptics reluctant to abandon any heading reference system – especially one as familiar as the magnetic compass – despite the existence of proven alternatives, AHRTAG member Dai Whittingham – also chief executive of the UK Flight Safety Committee – points out that modern aviation rulemaking is risk-based. Risk can never be reduced to zero, but the introduction of any new system must be proven to be extremely low-risk. Comparisons between the existing and proposed regimes are inevitable, but Whittingham believes it is wise – when playing “what if” games with the proposed system – to admit the existing one has many faults, and to enumerate those.

Meanwhile the AHRTAG, which continually seeks feedback from all parts of the industry, has been able to report that anticipated resistance to change in sectors like General Aviation (GA) is softening to the point of disappearance, especially as GA is a now big user of GNSS systems, whether employing installed avionics, hand-held GPS devices specified for aviation, or electronic flight bags (EFB tablet computers). Similarly, airline pilot associations and the airlines themselves, seem generally happy about the proposed changeover, for which the accepted shorthand has become Mag2True.

Canada’s draft CONOPS offers a good indication of how the Mag2True task might be rolled out. There are three aviation arenas affected: aircraft operations – which implies inclusion of the airlines and original equipment manufacturers (OEM); aerodromes; and, finally, ANSPs. Overseeing this will be the NAAs, with ICAO keeping an eye on standardization. Questions remain about timing. Should the switch to True be global and simultaneously on a single date, or managed regionally, or by hemisphere?

Canada proposes 2030 as a target transition year, with NAAs, ANSPs and States triggering the change. If a target date can be agreed, it would be entered in ICAO’s Aeronautical Information Regulation and Control (AIRAC) calendar in the normal way for promulgating changes.

Canada’s draft CONOPS proposes that, in the six months ahead of Mag2True transition, a State would not action any changes to its aviation information publications (AIP), freezing all but emergency changes to procedures. The only changes promulgated would be changes to convert Mag to True. 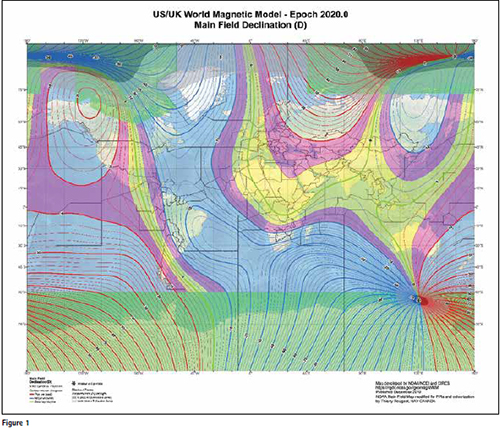 During this time the State would also need to enact a plan to rotate its VORs and ensure surveillance systems and air traffic controllers were all ready for the change. All states have a procedure in place for crews to adjust VOR radials (+- bearing values) until publication of the corrected values once the VOR is rotated and calibrated. The Mag2True transition date would be the last rotation of VORs, because once set to “0” – or True – they would never need to be rotated again. The ARINC 424 Database that the State AIP feeds could be maintained with its current structure, with all magnetic variation values being set to “0”. Jeppesen has successfully tested this conversion method, which was demonstrated via a CRJ 200 flight test with Nav Canada.

The draft CONOPS proposes a way of staging the changeover. The yellow areas of Figure 1 designate the places where existing magnetic variation is small. VORs in those areas could safely be aligned today to within +- 4 degrees of True North and would still fall within the current tolerance of many states. Canada uses +- 2 degrees as a tolerance but given the amount of magnetic variation change from coast to coast, Canada would have to rotate its VORs anyway.

For many aerodromes in areas within the magenta and yellow zones – where the variation is less than plus or minus 10 degrees of True North – no immediate change to runway numbering, or to airports manuals, would be required. Indeed, the draft CONOPS notes, it could be argued that no change would ever be required. Areas shaded in green are the regions where True North is already in use today.

For the remaining areas, change would have to be more carefully managed. But these areas are predominantly either oceanic, or cover Canada, USA, Russia, and Brazil, the states most accustomed to having to implement updated variation values. Since many carriers already use True tracks during oceanic operations, there would be little or no change for the ANSPs managing oceanic areas, or for those bordering them.

Admittedly there would be other small but important details that would need attending to. For example, airport air traffic services would need to ensure adjusted vector headings for common procedures were included in any memory aids for controllers. But with the exception of NDB approaches and vector headings, most other conventional and PBN (performance-based navigation) procedures are now track-based anyway, allowing correct tracks over the ground to continue during the change period. However, the heading error would appear as apparent wind drift, and that could be misleading to aircrew.

Crew confusion could indeed arise from changes to routines, especially to oft-flown procedures. On the other hand, there is plenty of potential for confusion in a system that continues to use two heading references, especially where one is variable.

Here are just two examples of repeating heading reference problems that are endemic to the existing system: A Boeing 757 was flying a CAT II approach to runway 29 at St John’s, Newfoundland, Canada. When it intercepted the localizer, the aircraft rolled back and forth across the localizer trying to maintain the centreline. The cause was that the magnetic variation (mag var) of the published procedure differed from the out-of-date mag var tables in the aircraft’s IRU (inertial reference unit).

At Calgary, Canada, a crew was testing the CAT III approach to the new runway 17L. The crew observed that the synthetic runway image in the head-up guidance system was misaligned by 7deg compared to the actual runway. The crew ran the same test again after the aircraft had been fitted with new IRUs for which the tables had been updated from 2010 to 2015, and suddenly the synthetic and actual world aligned perfectly.

In the months that followed, many crews conducting autolands on 17R at Calgary reported the aircraft moving off the centre-line when transitioning to autonomous flare mode. In all cases, those aircraft were found to have outof- date mag var tables in their IRUs.

Canada’s CONOPS offers a route to modernity and the avoidance of needless costs for the aviation industry. Moreover, the case for Mag2True will likely become unstoppable as the numbers of RPAS (remotely piloted air systems) and autonomous platforms increase – they already navigate in True. Why would aviation want to persist with two systems of reference, where True generates stability and Magnetic has constantly to be managed for error?