Augment Yourself with GNSS…

On March 25 – 27, 2019 the renowned conference “Munich Satellite Navigation Summit” welcomed about 450 participants at the Old Congress Hall in Munich, Germany. Within the last 16 years the Summit became an important event for getting updates on the latest news in GNSS as well as for high-level networking. As every year, the organization was led by the Institute of Space Technology and Space Applications (ISTA) of the Bundeswehr University Munich, in cooperation with the Bavarian Ministry of Economic Affairs, Regional Development and Technology. High-ranking speakers from all over the world contributed to a versatile program under the leading motto “Augment Yourself with GNSS…”.

The plenary panel discussion for the official opening of the conference was attended by prominent representatives from various European institutions as well as representatives from Russia and China. Hubert Aiwanger, the Deputy Bavarian Minister- President and Bavarian State Minister for Economic Affairs, Regional Development and Technology, honoured the event as an institutional meeting of experts in the field, but emphasized that satellite navigation is not a topic for experts only as it has a concrete impact on daily life. He highlighted that GNSS provides a variety of possibilities when it comes to applications. Therefore, Satellite Navigation and Earth Observation are key topics in the research infrastructure of Bavaria. With his background in agriculture, Hubert Aiwanger especially underlined that in this field the technology offers a lot of opportunities like the determination of the grow of crops on a field which provides important knowledge on the interaction between climate, land use and soil and plant processes. Finally Hubert Aiwanger valued the specific knowledge that every country has on satellite technology and pointed out that events like the Summit are important to communicate on an international level as well as to share know-how and experiences.

When it comes to GNSS innovations, autonomous driving is clearly one of the most discussed application concepts of the future. Carlo des Dorides, Executive Director of the European GNSS Agency (GSA), pointed out that within the last year there has been a growing demand by the autonomous driving sector in GNSS and Galileo in particular. He explained that besides 3D cameras, gyroscopes and accelerometers GNSS is becoming one of the key systems to provide data for positioning, navigation, and timing and that Galileo is especially interesting due to its excellent accuracy and the dual frequency. Prof Dr. Jan Woerner, Director- General of the European Space Agency, added that apart from autonomous cars, the concept of autonomous driving will especially be interesting when it comes to trains. From his point of view, the realisation of autonomous driving with cars within cities is not as easy as one might expect, also due to legal aspects.

To show the global relevance and presence of satellite navigation within another navigation related technology, namely augmented reality, a live demonstration was prepared for the opening of the Summit this year: With an application (running on iOS and Hololens) that was exclusively developed for the conference the four global navigation satellite systems GPS, Galileo, Beidou and GLONASS where flying around the earth and above the heads of the audience. The view of all GNSS at once showed that the number of satellites in orbit is quite impressive and that the cooperation amongst the systems becomes even more important. 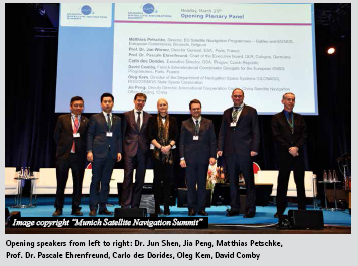 The impact of satellite navigation on day to day life also became visible in the following two conference days. After the traditional session on the global, regional and augmentation navigation satellite systems, one panel discussion was dealing with the topic “Augmented Reality (AR) meets High-Accuracy Positioning”. During this session, experts for AR and GNSS were discussing different approaches and challenges of combining these two state-ofthe- art technologies for daily life applications. The presentations as well as the discussions made clear that it is all about the accuracy. For the AR experts tracking is one of the largest challenges to overcome. Fiammetta Diani, Head of the Market Development Department at GSA, explained that GNSS is already able to react to these demands by providing a meter level accuracy outdoors, even in difficult environments like urban areas, and corrections for Precise Point Positioning (PNT) are already on their way. Therefore, AR may count on a very accurate and reliable GNSS in the coming two or three years, provided that further improvements in the smartphone GNSS-antenna will take place. Miguel Manteiga Bautista from ESA made a point by recognizing that within a few decades the major part of the humanity will live in smart mega cities, but that the current PNT concept relying on GNSS is not really optimized for this area.

Beyond today’s GNSS, Revolution or Evolution?

Under the guidance of this year’s Kepler Award winner, Dr. Oliver Montenbruck, three concepts for the navigation satellites systems for the years >2040 have been discussed. Dominic Hayes from the European Commission outlined requirements. Dr. Todd Walter from the Stanford University showed a concept utilizing a LEO constellation to achieve a higher geometric variability in the orbit and Dr. Christoph Günther from DLR presented the Kepler concept making use of optical technology and to virtually eliminate the need for a ground segment.

As every year, the participants had also the opportunity to visit an international exhibition on site of the conference to get in touch with different companies and institutions working in the field of satellite navigation. Amongst 17 exhibitors, Airbus Defence and Space, spaceopal, the European Commission and the European GNSS Agency (GSA), GMV, and NavCert presented their current activities.

The Munich Satellite Navigation Summit 2019 will take place on March 16 – 18, 2020. Up-to-date information on the conference can be found at www.munichsatellite- navigation-summit.org. – Thomas Pany and Kristina Kudlich.