The following are the parameters on which the accuracy of the DGPS depends- LB, OT, number of visible satellites (affects geometry), relative geometry of satellites and change in geometry and Signal to noise ratio (SNR) of received satellite signals. Joao et al 2010 had investigated the DGPS accuracy that was majorly affected by baseline length. Hayakawa et al., 2006 revealed that increase in occupation time would increase the accuracy of DGPS measurement. Accuracy of DGPS devices also depends on SNR Value (Jay et al., 1999). Different surveying methods reflect different accuracy levels. In the present research work, the single frequency (L1 receiver) on relative horizontal accuracy was studied. The companies give different accuracies in various modes such as static, stop and go with respect to different occupation time as shown in Table 1.

Following are the steps involved for accuracy assessment:

• In case of stop-n-go survey method, a physical circle of 10 meter radius was made, and along the radius six points were taken along with a radius as shown in Figure 1. In this exercise, the centre point was taken in the static mode up to the desired observation with reference to baseline. For reference, long observation was taken into consideration in order to fix the coordinate. Other points were taken in Stop & Go with different occupation time such as (15 sec, 30 sec, 45sec, 1 min and 5 min), then Root mean square error (RMSE) was calculated for it.

• Future analysis depicted the error with references to signal-to-noise ratio (SNR). It was done by selecting a point with the same baseline, same PDOP and varies with SNR Value.

In case, static point for different baseline occupation and PDOP values should be less than 2.

There is no significant change in coordinate up to 25 min, but there is a change after 20 min that can be notified. But the integer ambiguity cannot be resolved after 15 min occupation. It can be estimated that from large baseline length (>3km), 25 min occupation is enough to get accurate coordinates and to fix the integer ambiguity as shown in Table 4 and graphical representation shown in Figure 4. 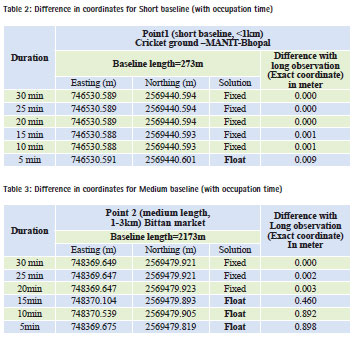 The number satellite varies 7 to 9 and satellite geometry such as PDOP varies from 1.8 to 2.4. After calculation of the distance from the centre point, RMSE error calculated is shown in Table 5 for each occupation time. Graph is plotted for RMSE error with different occupation time. The graph shown in Figure 6 shows that there are no changes in with occupation time, so that 15 sec occupation is enough to get 5-10 cm level accuracy for short baseline length.

The number of satellite varies from 7-9 and satellite geometry such as PDOP varies from 1.4 to 1.9. After calculation of the distance from the center point, final RMSE error for all points are shown in Table 7, that is calculated for each occupation time. Graph plotted for RMSE error with different occupation time is shown in Figure 7. It shows that there is no significant change after 1 min and accuracy is in centimeter level, so that for a large baseline, 1 min occupation time will give 5- 10 centimeter level accuracy. Effect of Signalto- Noise Ratio (SNR) on DGPS accuracy On these points, data was collected in Stop & Go method for 1 min (estimated time) because the baseline length is 7,088 m. Post processed coordinates and error is shown in Table 8. The average SNR value is also included for analysis.

Further investigation had been done to see the effect of SNR on the error. In this study, only six satellites from the available GPS constellation were selected, then post processed. It was done by using GNSS solution software by deselecting the satellite, determining the SNR value of each satellite and then arranging the different SNR value in descending order. The combination of six selections for analysis were considered and the other satellite was deselected. Then error estimates based on this is shown Table 9 and graphical represention is shown in Figure 9. Investigation revealed that the error does not only depend on SNR value. We cannot have a generalized SNR value and error because it depends on the receiver capability also. By using the instrument Promark3 (Magellen), we can derive linear relation between SNR and RMSE as shown in Figure 10. 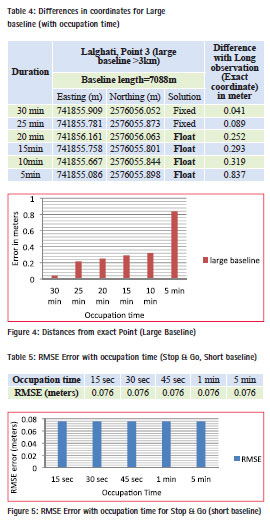 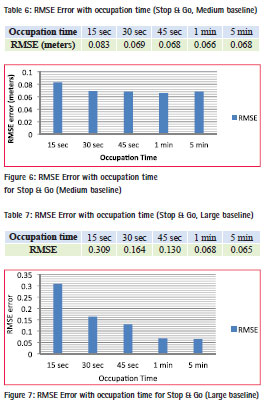 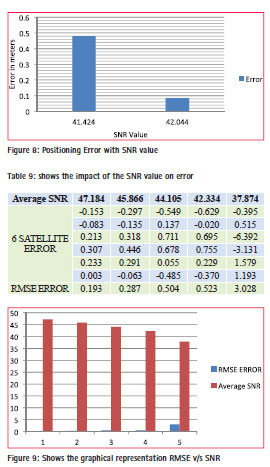 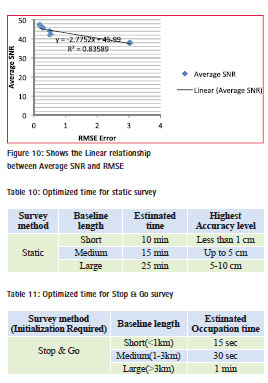 The accuracy of DGPS positioning with post-processing differential correction is dominantly affected by the duration of the measurement, but the same occupation time is not required for every baseline length. Following are the conclusions of the present research work investigations 1. The static survey is mainly used for high-accuracy. Static method needs long observation, but after a certain period, accuracy does not change significantly. Following Table 10 shows the optimized time for static survey.

(a) For short baseline (< 1km), 10 min observation is enough. After that, no significant changes can be noticed in positioning.

(b) For next every 1-2 km baseline length, it needs 5 min more occupation on point for fixed solution and to enable efficient differential correction.

2. The Stop & Go surveying method may be an appropriate one for the DGPS survey of small areas, if no obstruction of signals takes place due to vegetation, etc. To achieve accuracy level of 5-10 cm in Stop & Go, the required occupation time is given in Table 11. However, in order to get accuracy up to the level in Stop & Go surveying method, there are some limitations like no loss of lock and site clearance for signal obstruction by objects like high rise buildings and trees.

4. Signal-to-noise ratio also plays a vital role in determining the accurate position. It depends upon internal as well as external system. Internal system must be of good quality with sufficient number of channel receivers with good noise filters. External noise is due to the external environment such as airport, high tension line, etc. So we cannot generalize the error with respect to SNR Value. But with some modern instruments, we can predefine the SNR value like PDOP value to be specified.