The effort for realizing fully autonomous and operative Unmanned Aerial Systems (UAS) induced the need of developing innovative techniques for integrating measurements derived from different aircraft navigation systems. Since no human aid is available onboard UAVs, navigation hardware must attain larger capabilities than the ones of manned platforms. In particular, the most important features that shall be considered are autonomy, safety, compatibility with previously developed flight standards, and whole mission coverage [1]. This latter feature means that adequate and reliable navigation must be accomplished even during critical phases such as takeoff and landing, during which the required positioning should be always available with a high accuracy [2].

Several research activities have been developed in last years in order to increase the autonomy features in UAVs [3], in order to expand the flight envelope [4] and to improve security levels of modern aircrafts, both manned and unmanned. In particular, a very great research effort has been devoted to the achievement of high automation in the landing phase, so as to allow the landing of an aircraft without human intervention, also in presence of environmental disturbances.

Currently, no single sensor is capable of reliably realizing the required performance without relying on some ground measurement, hence UAS navigation requirements can be fulfilled only by integration of measurements from multiple sensors. In particular, configurations that integrate inertial sensor measurements with GPS, altimeters, air data sensors, and magnetometers are very frequent ([5]-[7]), and resulting performance and reliability depends on both sensors accuracy and adopted integration techniques.

In this context, CIRA developed a complete autonomous mid-air flight [8], collision avoidance [9], take-off and landing ([10], [11]) system for fixed wing aircrafts. This overall system has been worked out in the national founded project TECVOL (Technologies for Autonomous Flight), which continues and extends the previous CIRA project ATOL (Automatic Take-Off and Landing), successfully completed in 2004 [12]. Autonomous mid-air flight and autonomous landing capabilities of this system have been completely tested, up to the experimental in flight validation by means of a prototypal flight test bed, while at present autonomous collision avoidance and autonomous take off systems have been tested up to the real time stage and are ready for the real world in flight validation.

To work with high performances, the autonomous flight algorithms developed in the TECVOL project need of a good set of navigation measures, so suitable sensors fusion algorithm has been developed in the same project, as described in the next.

The technologies developed in the TECVOL project are validated in real world by means of a flying test bed, consisting of a piloted aircraft equipped with on-board avionic system and onground control station, both designed and integrated by CIRA. The flyingplatform is an experimental ultra light aircraft with a max take off weight of 450 Kg, a max speed s/l about 218 km/h, a cruising speed about 190 km/h, wing area of 13.2 m2, wing span of 9.6 m and maximum engine power of 100 hp.

On board avionic system includes all devices, selected among the Commercial-Off-The-Shelf (COTS) ones, needed to perform the in flight experimental validation of advanced guidance, navigation and control functionalities. These devices are the ones described in the next.

• A Flight Control Computer (FCC), which is an embedded real-time computer based on a PowerPC processor, provided by the supplier with a tool based on the most advanced control system rapid prototyping methodologies. This software environment enables the automatic coding of the real-time SW directly from Matlab/SimulinkTM diagrams.

• A navigation sensor suite including: (a) two GPS, one in differential mode and the other in Real Time Kinematic (RTK) L1/L2 mode, capable to provide position measurements with few centimetres accuracy; (b) a solid state Attitude Heading Reference System (AHRS); (c) a laser altimeter; (d) an Air Data Computer (ADC) with a dedicated air data probe capable to provide IAS, TAS, barometric pressure and aerodynamic angles measurements. For what concerns the two GPS installed on board, it is worth to emphasize that only the one in DGPS mode is used in the sensor fusion algorithm described in the next, while the other, in RTK mode, is used as reference to verify the sensor fusion algorithm accuracy.

• Digital electromechanical servos, to command both aerodynamic surfaces and throttle, driven by the FCC.

• A digital bidirectional data link system able to exchange data between on board FCC and the ground control station, with a maximum bit-rate of 9.600 bit/ sec in uplink and 115.200 bit/ sec in downlink, up to about 6 Km of operative range.

• Angles of attack and sideslip sensors.

As already said, two GPS are installed on board and configured in different ways, to have a comparison between the aircraft position and velocity measures obtained by the sensors fusion algorithm implemented in the FCC and the ones obtained by the GPS configured in RTK mode. The radiomodem output is connected to both GPS, in such a way as each sensor receives and selects the Real Time Correction Messages (RTCM) required by the RTK and DGPS algorithms. The ground control station (GCS) is installed in a big shelter fixed on the ground near the runway. It is designed to show telemetry data to flight test engineers through dedicated

Human Machine Interfaces (HMI) and to allow the on board avionic system remote reconfiguration. The GCS architecture is based on the interconnection of the elements listed in the next:

The GCC, based on PC-104 formfactor, is the core of the whole ground segment. It is connected, by an Ethernet field bus, with all the computers in the GCS and, by dedicated point-to-point RS232 connection, with the uplink and downlink radio-modem. Considering reliability constraints, both GCC and FCC use a hard real-time operating system.

The most common integrated navigation techniques make use of Kalman filtering ([13]-[15]). The main drawback of these techniques is the necessity of an 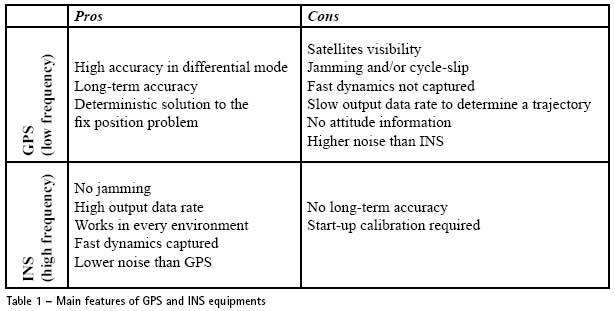 accurate sensor error model, so as when poor information are available about the sensors used it is very difficult to obtain an appropriate adjustment of the Kalman Filter. With the aim to develop a low cost navigation sensor suite, our choice has been to use a simpler sensor fusion algorithm based on the concept of Complementary Filtering that will be described in the next.

For what concerns, generally, a sensor fusion algorithm design, in a navigation system based only on GPS measures, typical error sources are:

To overcome these limitations, a good solution consists in the integration of the GPS position and speed measures with the ones coming from other sensors: the auxiliary system most commonly used to such aim is an INS sensor.

In Table 1, main features of both GPS and INS are shown and compared.

In general, from the Table 1 analysis, it can be derived that the advantages arising by the INS/GPS integration are:

• advanced accuracy on position and speed,

• limitation of the INS errors by means of the GPS measures,

• possibility of using INS when the GPS is unusable,

• the velocity measure from the INS can help to eliminate GPS jamming problems,

• the position measure from the INS can help to reduce the acquisition time of the satellites (time to hot fix),

• the high INS short-term accuracy can eliminate the cycle-slip problem,

• thanks to GPS, INS can be economic and more compact.