A glance into the future of PNT

This year’s Munich Satellite Navigation Summit took place on March 24 – 26, 2015 and was all about the future of PNT. 80 speakers from government, industry and science were invited by the organizing Institute of Space Technology and Space Applications (ISTA) of the Universitaet der Bundeswehr Muenchen to take a glance into the crystal ball.

The annual conference was kicked off on March 24 in the historical Court Church of All Saints with a ceremonial opening full of jazz sounds and discussions amongst highlevel representatives from various European ministries and entities as well as from USA, Russia and China. About 400 participants from 20 nations were welcomed by the Deputy Bavarian Minister-President and Bavarian State Minister for Economic Affairs and the Media, Energy and Technology, Ilse Aigner, as well as Prof Dr Merith Niehuss, President of the Universitaet der Bundeswehr Muenchen, and Prof. Dr Bernd Eissfeller, chairman of the conference. Ilse Aigner pointed out that space science is an important matter for the Bavarian government, with over 50 entities being involved in the Aerospace sector. The following panel discussion of the evening was dedicated to the topic „Satellite Navigation and Space: International agencies discuss the status and future trends“. All panel members underlined that the cooperation between the single systems is essential for a successful future of GNSS. In this context, Matthias Petschke, Director of the EU Satellite Navigation Programmes at the European Commission, remarked that Galileo will provide full service by 2020 and that it is important to create a multi-GNSS constellation with other providers, enhancing the international cooperation between the agencies. The need for cooperation to ensure compatibility and operability was also supported by Harold Martin, Director of the National Coordination Offi ce for Space-Based Positioning, Navigation, and Timing in Washington, D.C., who furthermore pointed out that GPS is continuously improved and that there is a need to establish an U.S. coverage for GPS outage due to natural or man-made interference. He further explained that several alternatives are identifi ed and assessed and that the decision is likely to be made in summer 2015.

Varied program on future of PNT

The conference program continued on the following two days with a broad overview on different up-to-date topics in the sector of PNT. Starting with sessions on the global, regional and augmentation satellite navigation systems, the program focused amongst others on issues like the future trends of PNT and the GNSS (Application) Market, the role of GNSS and space sensors in “Big Data” or the processor and semiconductor trends for GNSS receivers. One session, chaired by Prof Dr Michael Meurer from the German Aerospace Center (DLR), dealt with the subject “Alternative Positioning, Navigation, and Timing (APNT)”. Due to the vulnerability of GNSS to interference and due to the dependency on a single system, the strengths and weaknesses of various alternative PNT systems were discussed by the panellists that came from different sectors like maritime and aviation. Prof Dr Wouter Pelgrum, Ohio University, stated that APNT should be a combination of systems that will enhance the GNSS performance, depending on the application. From his point of view eLoran could be a plausible way due to the high power of the signal – that makes it diffi cult to jam – as well as the high accuracy. Dr Nick Ward from the Research & Radio Navigation Directorate at the General Lighthouse Authorities talked about PNT in maritime services. He said that GPS has become the normal means for maritime PNT, but added that eLoran should provide additional support based on its accuracy. According to Dr Ward, the situation of eLoran in Europe shows that there is not a coordinated policy on resilient PNT and that the future challenge will be to find a continuous commitment to the system, at least during the next 10 years. 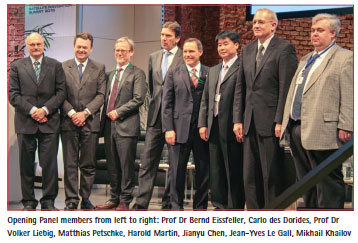 The conference program was completed by an exhibition, at which 15 companies and institutions presented their business and products.