The Government of India, in the year 1979-80, initiated a scheme for Integrated Development of Small & Medium Towns (IDSMT). The main objectives of the Scheme were Improving infrastructural facilities and helping in the creation of durable public assets in small and medium towns; Decentralizing economic growth and employment opportunities and promoting dispersed urbanization; Increasing the availability of serviced sites for housing, commercial and industrial uses; Integrating spatial and socio-economic planning; and Promoting resource generating schemes for the urban local bodies to improve their overall financial position. The Guidelines were revised in the year 1995 (MoUAE, 1995). The Scheme was continued with timely amendments and modifications up to the year 2004-2005. Later, in December 2005, the Scheme was subsumed in Urban Infrastructure Development Scheme for Small and Medium Towns (UIDSSMT) Scheme. It was envisaged that the investment in the development of small and medium urban centres would help in reducing migration to large cities and support the growth of surrounding rural areas, as well.

The focus, in the subsequent years shifted towards the large and metropolitan cities. The Smart Cities Mission and the Atal Mission for Rejuvenation and Urban Transformation (AMRUT) saw the attention diversified to a variety of size class of towns and cities. These missions also saw a clear shift on providing the technical support to the process of Master Planning, with the Geo-Spatial technologies, i.e., the Remote Sensing and GIS. Continuing in the same spirit, the Ministry of Housing and Urban Affairs (MoHUA), in October 2020, launched the ‘Design and Standards for Application of Drone/ UAV Technology for Formulation of GIS based Master Plans for Small and Medium Towns’ (TCPO and SoI, 2020).

Earlier, under the National Urban Information System (NUIS) Scheme, the first of its kind in the country, a national level High Resolution Geospatial data base was created by obtaining data from Cartosat-1 + LISS-IV imagery and aerial photography, for preparation of 1:10,000 and 1:2,000 scale maps for Master Plan formulation. The NUIS Standards (TCPO, 2006) were subsequently modified to meet the needs of mapping at 1:4,000 scale for the Formulation of GIS-based Master/ Development Plans for 500 AMRUT Cities (TCPO, 2016). These Schemes were supported with dedicated Design & Standards documents.

However, due to technological constraints in both the NUIS and AMRUT schemes, different standards were adopted to generate spatial data for local, zonal and regional level plans. This resulted in data inconsistencies at various levels of plan preparation. Technological advancements like Unmanned Aircraft System (UAS) and the Unmanned Aerial Vehicles (UAVs) have now made it possible to obtain quality Geospatial data of high accuracy and better spatial, spectral and temporal resolution at low cost. Thus, the same data acquired by UAS/ UAV, can be used in a vertically seamless manner for preparing master plans at local, zonal as well as regional scales. Hence, the need for revising standards and to further improve the Geospatial data base with help of UAS/ UAVs.

Historically, the country has not been able to keep pace with the planned development of its towns and cities. Out of some 8,000 towns and cities in 2011 (including about 4,000 Census Towns), only 2,631 urban settlements have approved master plans in force and 402 master plans are in the process of being formulated. When completed, the total of only 37 per cent of towns and cities would have master plans/development plans. Besides the procedural delays in obtaining public opinions and objections, and the necessary approvals and notification process, the lack of quality spatial data is one of the biggest culprit to the delays and hence a very low number of Master Plans prepared.

The small and medium towns suffer additionally, due to low fiscal and technomanagerial capacities. These 7,428 small and medium towns, with population less than 1,00,000 each (categorised as Class II to Class VI, as per the Census of India), constitute approximately 40 per cent of the total urban population and 93 per cent of the total number of towns and cities in India (2011). Growing at a rate ranging between 48 to 185 per cent, these small and medium towns have generally grown out of large villages, without much planning and developmental efforts. Viewed as future centres of urban growth, they demand and deserve attention for their planned development. 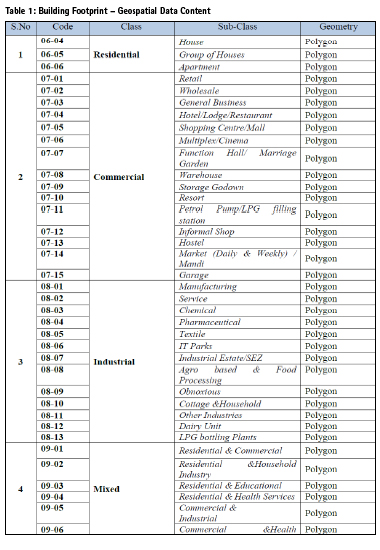 Urban planning, development and management require intense surveys, accurate measurements, change detection and timely implementation and monitoring. Traditional survey techniques for huge areas for planning require use of large sensors, satellites, extensive manual work, manned aircraft, etc. This is where city planners/ managers/ administrators/ tax collectors can benefit from the potential of UAV technology to transform planning and management; where the low-cost Drones/ UAVs, on as and when required, could provide very detailed, up-to-date geographic information for small areas within limited resources and time frame. The Geospatial technologies like Drone/ UAVs, along with Geographic Information System (GIS) can provide input for the preparation of base maps, which are prerequisite for formulation of Master/ Zonal/ Local Area Plans, especially for small and medium towns. Thus, UAV/ drones provide a much cheaper alternative to manned flight, and enable applications that were near impossible earlier. 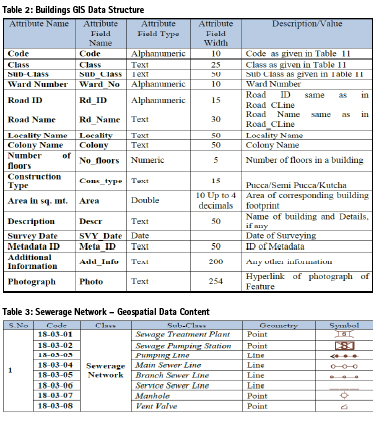 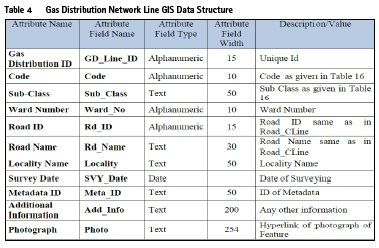 The tables included in the Design and Standards document provide detailed specifications for the Feature Class and Sub-class, three level coding, expected geometry (i.e., the point, line and polygon) as well as symbols. This will prove to be extremely useful in maintaining uniformity across various Master Plans for the small and medium towns located under jurisdiction of the different State Town and Country Planning Departments in the country. Uniformity will further ensure that no data has been omitted. It will further help in horizontal and vertical integration of data and for ease of intertown comparisons for academic analysis.

A few samples of these tables, showing the feature class, sub-class, coding, geometry and symbols have been provided as tables 1-5. Another sample table, showing Ground Control Points GIS Data Structure, has been provided as Table 6. 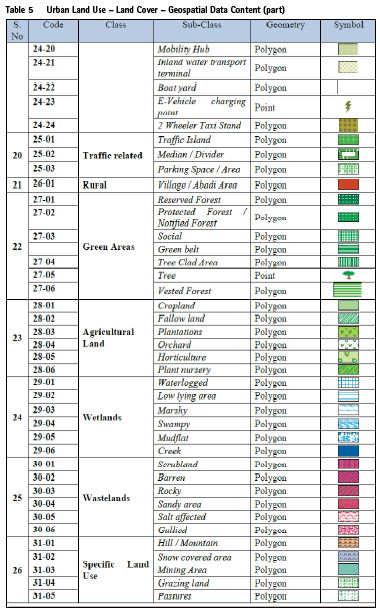 The standard Spatial Data Model Structure (SDMS) for large scale for 2D feature extraction using UAV have been formulated to maintain consistency with the SDMS of the Survey of India as well as DMS of AMRUT. The feature layers are classified into classes and sub-classes for ease of operation.

Each GIS feature is assigned with a unique numeric code. The code is unique with respect to the feature, irrespective of its geometry and layer.

Directorate General of Civil Aviation (DGCA) of India announced ‘Civil Aviation Requirements (CAR) Section 3 – Air Transport, Series X Part I, Issue I’, in 2018, for regulation and requirements for operating of civil UAS/ RPAS in India. These statutory provisions not only have strong implementations on the UAS design but also on the operation of UAS. This CAR, issued under the provision of Rule 15A & Rule 133A of Aircraft Rules, 1937, lays down operational requirements for civil RPAS, licensing process, security/ safety, remote pilot training, RPAS maintenance, equipment, operating restrictions, general requirements, minimum standards for manufacturing of RPAS (both Indian & foreign), legal obligations, insurance & enforcement action for violation/ breach of compliance.

An understanding of provisions contained in above notification is very important because they directly or indirectly affect the standards & design of geo-spatial data acquisition. The document provides further details of these requirements and statutory obligations, and the various procedures that need to be followed for compliance.

In the meanwhile, the Ministry of Civil Aviation, Government of India has come out with the Discussion Draft of the National Unmanned Aircraft System (UAS) Traffic Management Policy further to the recent developments in the UAS ecosystem and the vision of developing India as a global hub for UAS technology. The primary objective of this policy document is to define how various UA Operational Scenarios will be enabled in the low-level airspace using the UTM Ecosystem and the Regulatory System referred to as the DigitalSky Platform. This document identifies a vision and a roadmap for enabling future UA operational scenarios in all airspaces while addressing aviation security concerns and measures to mitigate them based on threat and risk assessments. Various concepts like the UTM Stakeholders, UTM Architecture, UTM Services, UTM-ATM Integration, Data Security and Data Privacy, which are key to the operationalisation of the UTM Ecosystem in India, are further identified in this document.

When implemented, this will give further boost and direction to the Drone/ UAV Technology for Formulation of GIS based Master Plans.

Master Plan formulation requires a variety of data at different stages of the planning. While primary data collection involves time-consuming surveys, most socio-economic data may be obtained from published or unpublished secondary sources. In order to streamline the process and minimise delays in the plan preparation process, a standardised data collection format has been provided as an effort to simplify and speed up the plan preparation process. 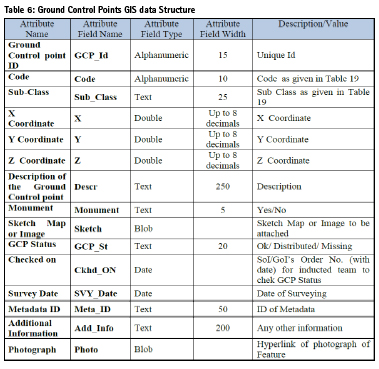 This format for urban data collection at town/ ward level consists of 25 tables which cover key areas such as demography, physical and locational aspects, physical and social infrastructure, environment, housing and slums, governance, etc., vital for studying existing situation and framing proposals. The guidelines to fill in the format have also been provided.

Future scope and path ahead

The current SDMS of the Survey of India caters to 2D data only. It does not cater to the requirements of 3D textured models that are also produced via UAS survey. Due to paucity of time and resources, the requisite 3D SDMS could not be developed. It is recommended that development of 3D SDMS and its City GML implementation, for depicting city infrastructure and vertical space (floor/ unit) in the city landscape, should be taken up.

As multiple functional units exist in the same building, the classification can be done at Building Unit level. The classification of various classes (commercial/ industrial, etc.) can be further done up to the next more detailed level.

The present document focuses on Design & Standards for data acquisition and spatial data base creation for Master Plan formulation. Task force may be constituted to document the training requirements; changes in existing mechanism, development of applications for integration of GIS based master-plan into the business processes of TCPO and urban authorities. Further, since the Drone technology is capable of providing very detailed and accurate information at large scales, there exists tremendous potential to take the technology further at the levels of Local Area Planning (LAP), neighbourhood planning and for site planning. Possibilities also exist to engage the technology for Urban Design studies, particularly when it comes to studying and analysing building facades of large buildings and monuments. Photogrammetric records of buildings and precincts of heritage value could also be generated for further studies and archiving. UAVs could easily manoeuvre to capture the elevations for the purpose of geo-tagging the pictures on GIS maps. Inspections and documentation relating to violation of building bye-laws can be an additional support to the urban local bodies. The technology driven plan preparation process will also ensure meaningful public participation in various stages of planning. These and other possibilities must be explored as part of the ‘Pilots’ being planned, as detailed below.

The Ministry of Housing and Urban Affairs (MoHUA) is in the process of launching pilot projects for 10 AMRUT towns at different geographic locations (viz., coastal, hilly, plain, riverine and desert), wherein complete drone mapping, at a scale of 1:1,000, will be taken up using the said Design & Standards.

[5] TCPO and SoI, 2020, ‘Design and Standards for Application of Drone/ UAV Technology for Formulation of GIS based Master Plans for Small and Medium Towns’, Ministry of Housing and Urban Affairs, Government of India. http://tcpo.gov.in/sites/ default/files/newfile/dron-min.pdf