Geospatial Information Authority of Japan (GSI) has developed and operated nationwide GNSS continuous observation network, GEONET, since 1996. The GSI has gradually updated system of GEONET and the upgrade has enabled GEONET to receive more and more signals. GNSS observation data of GEONET, including GPS, QZSS and GLONASS, has been publicly opened to users since July 2012. The immensely-high performance in defining, maintaining and providing geodetic reference frame and position information has made GEONET an essential infrastructure not only for land surveys, but also for geospatial information management and crustal deformation monitoring in Japan. The system showed great performance in maintenance of geodetic reference frame in Japan through prompt revision of survey results at the 2011 off the Pacific coast of Tohoku Earthquake. GSI is still facing the challenge to enhance the system performance in order to enable real-time monitoring of crustal movements and earthquake magnitudes in case of huge earthquakes.

GSI also utilized GEONET stations for developing a new hybrid geoid model of Japan, GSIGEO2011. The new model was created by fitting high-resolution gravimetric geoid model of Japan to GNSS/ leveling geoid undulations at GEONET stations, and has been publicly available since April 1, 2014. By utilizing the new model for GNSS surveying, orthometric height determination by GNSS surveying has become possible as the same precision- level as third-order leveling surveys. The height determination has been available for public surveys in Japan since April 1, 2013. Orthometric heights of almost all of the triangulation control points in Japan were also re-calculated and revised by applying geoid heights of the model. The revision improved consistency in orthometric heights between triangulation control points and GEONET stations.

GSI has been developing and operating nationwide GNSS continuous observation network, GEONET, since 1996 (Hatanaka et al., 2003). GNSS observation data of GEONET, including GPS, QZSS and GLONASS, has been publicly opened to users, and GEONET has become essential infrastructure not only for land surveys, but also for geospatial information management and crustal deformation monitoring in Japan. The system showed great performance in maintenance of geodetic reference frame in Japan through prompt revision of survey results Tohoku Earthquake that took place off the Pacific coast in 2011.

The GEONET stations are also utilized for development of a hybrid geoid model of Japan, GSIGEO2011. The GSI created the new hybrid geoid model by fitting high-resolution gravimetric geoid model of Japan to GNSS/leveling geoid undulation at GEONET stations. Orthometric height determination by GNSS surveying has become possible anywhere in Japan by utilizing the model. And the orthometric height determination has also been applicable in public surveys as alternative to third-order leveling in Japan since April 1, 2013.

Currently, the GSI is operating continuous GNSS observation stations at approximately 1,300 locations. The stations are covering all Japanese islands in order to realize and maintain the geodetic reference frame in Japan as well as to monitor crustal deformation in Japan. The entire system, which is comprised of these observation stations and the central station in Tsukuba for collecting, analyzing and distributing these data, is called GNSS Earth Observation Network System, GEONET.

Significant crustal deformation was caused by the 2011 off the Pacific coast of Tohoku Earthquake and GEONET detected the deformation just after the earthquake. Figure 1 shows the horizontal movements and Figure 2 the vertical movements of GEONET stations in northeastern Japan (GSI, 2011). The maximum displacement is recorded at the Oshika site in Ishinomaki City, Miyagi Prefecture, and comprises about 5.3 m horizontal displacement toward the east to south-east and up to 1.2 m vertical subsidence. 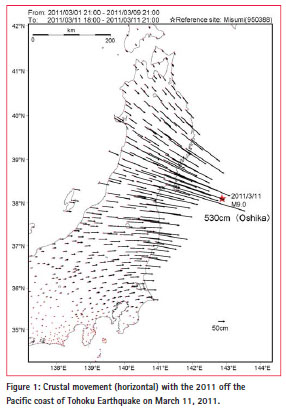 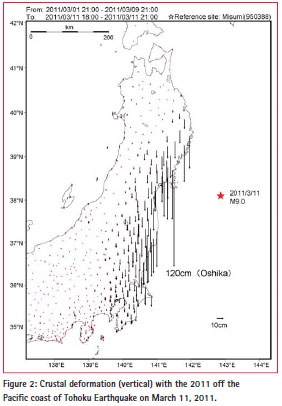 GNSS observation data and GNSS solutions of GEONET are freely available from the GSI website (http:// terras.gsi.go.jp). These observation data contain pseudo range and carrier phase data per 30 seconds and broadcast ephemerides in RINEX format. On July 13, 2012, at 15 % of GEONET stations, GSI started providing the observation data received from the Quasi-Zenith Satellites System (QZSS) and GLONASS in addition to the existing GPS. On May 10, 2013, this was extended to almost all GEONET stations.

The QZSS is a regional satellitebased positioning system operated by Japan. The system covers regions from East Asia to Oceania centering on Japan and is designed to enable users in the coverage area to receive QZS signals from high elevation angles at all times. The first satellite of QZSS was launched in September 2010, and four satellites constellation is planned to start its operation in 2018 by adding three satellites into the orbits. Recently, RINEX ver. 3.02 that officially supports QZSS was released, and the GSI will provide the data in the format from 2015.

The GSI collects real-time data from 1,257 stations with sampling intervals of 1 second. These data are provided to three private enterprises via a non-profit distributor, and utilized for generating correction data for network-based RTK.

GEONET has three different routine analysis strategies; Quick, Rapid and Final. Quick analysis is executed every three hours with 6 hour data and utilized especially for promptly monitoring crustal movements. Rapid analysis is done every day with 24 hour data. Final analysis is the most robust analysis and executed with IGS final orbits. These analyses are routinely performed with BERNESE ver.5.0.

By utilizing spatially dense coverage of GEONET stations and robust realtime streaming data, the GSI has been developing a new GEONET real-time analysis system, named REGARD (Real-time GEONET Analysis System for Rapid Deformation Monitoring). The system is designed for estimating permanent displacement fields and Mw of giant earthquakes immediately after the earthquakes. The system also notifies the results in real-time. Figure 3 shows processing flow diagram of the estimation by REGARD. The GSI verified that the system successfully could estimate appropriate Mw values just after a couple of minutes in cases of large events (e.g. Mw8.9 in the 2011 Tohoku earthquake). It is planned to focus on exploiting to prompt estimation of tsunami scale and prompt tsunami warning. 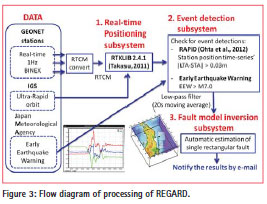 The GSI has developed a new hybrid geoid model of Japan, GSIGEO2011 (Figure 4), which covers almost all areas of Japanese islands. The model is created in such a way that a high-resolution gravimetric geoid of Japan, “JGEOID2008” (Kuroishi, 2009) was fitted to GNSS/ leveling geoid undulations at 971 sites by a Least Squares Collocation method. The sites are composed of 786 GEONET stations, 29 tide gauge stations and 156 benchmarks. The model reproduces geoid heights at the GNSS/leveling sites with the consistency of a standard deviation of 1.8 cm (Figure 5). The errors range from -6.2 cm to 8.2 cm with average of 0.0 cm, indicating that the model is consistent with GNSS/leveling geoid heights to 2 cm in magnitude at one-sigma level of confidence. The model was made publicly available on April 1, 2014. 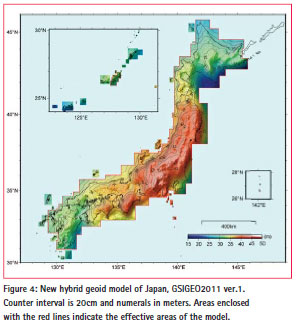 In the areas affected by crustal deformation of the 2011 off the Pacific coast of Tohoku Earthquake, the GSI re- surveyed orthmetric heights of benchmarks through almost all the leveling routes and also at 55% of GEONET stations (Figure 6). The GSI immediately conducted network adjustment calculation with the re-surveyed data and made the results publicly available as revised survey results of the benchmarks. The revised orthometric heights were also utilized for development of GEIGEO2011, and the model is consistent with the orthometric heights even in the areas greatly affected by the crustal movements of the Tohoku earthquake. 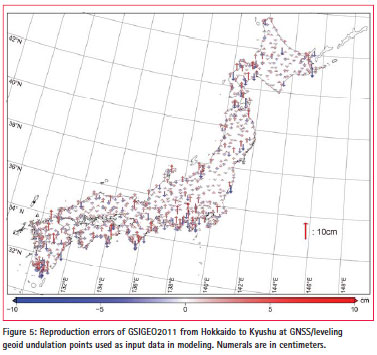 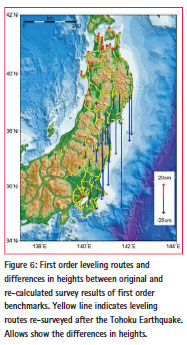 By utilizing the model to convert GNSS-derived three-dimensional positions to orthmemetirc heights, GNSS survey can determine orthometric heights at the same precision-level as third order leveling surveys. The orthometric height determination by GNSS surveying has been applicable in public surveys as alternative to thirdorder leveling in Japan since April 1, 2014. The GSI also newly established a survey procedure for the height determination. The procedure defines a work flow to determine orthometric heights through GNSS observation by utilizing the model and has also been publicly available since April 1, 2014. 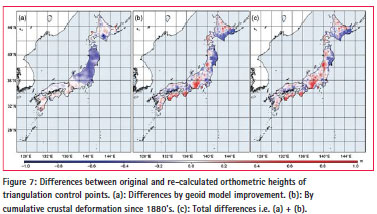 The GSI also re-calculated and revised orthometric heights of almost all of the triangulation control points in Japan by applying geoid heights of the new model. The results were publicly announced on April 1, 2014. The differences between the original and the re-calculated heights range from -94cm to 78cm with average of 15cm (Figure 7). The GSI started triangulation surveys of the triangulation control points in 1880’s and had conducted the surveys over a hundred years. Therefore, these differences in the heights are derived from not only the model improvement, but also vertical crustal deformation caused by cumulative crustal deformation in Japan islands from 1880’s. The revised results are available in the GSI website and users can access more accurate and credible heights information of Japan.

Geospatial Information Authority of Japan (2011): Crustal deformation associated with the 2011 off the Pacific coast of Tohoku Earthquake on March 11, 2011, http://www.gsi.go.jp/ chibankansi/chikakukansi40005.html (accessed 5 Dec., 2014). (in Japanese)

Imakiire, T. and T. Kobayashi (2011): The Crustal Deformation and Fault Model of the 2011 off the Pacific Coast of Tohoku Earthquake, Bulletin of the Geospatial Information Authority of Japan, Vol.59 December, 2011, 21-30.