What is an “epoch” and how does this cause a GPS Week Rollover issue?

The Week Rollover Problem is a known issue caused by the way that GPS used to handle the week element of the data that forms an essential part of the navigation signal.

GPS used a 10-bit field to encode the week number in each GPS time message, which means that a maximum of 1,024 weeks (19.7 years), could be handled. Each of these periods is known in GPS terms as an “epoch”.

At the end of each epoch of 1,024 weeks, the receiver resets the week number to zero and starts counting again.

The first GPS satellites went live on 6 January 1980, meaning that the first epoch of GPS time lasted until 21 August 1999. We are now nearing the end of the second epoch, which will fall on the 6 April 2019. That means from that date onwards, we are likely to start seeing rollover problems in GPS receivers that aren’t programmed to cope with the week number reset. 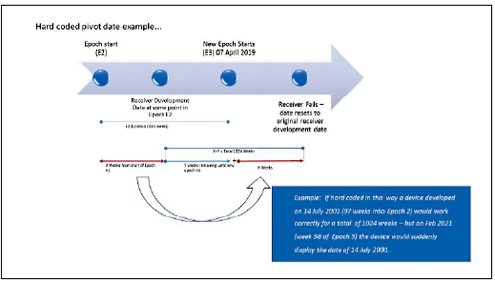 Is it the “millennium bug” for GPS Receivers?

Week Number Rollover issues won’t necessarily become apparent on 06/07 April – that’s because many device manufacturers realised the limitation of the 10-bit field and worked around it by implementing the 1,024-week limit from the date the firmware was compiled, rather than from the date the current GPS epoch began. This means that older GPS receivers will operate normally for almost 20 years before problems begin to occur.

For example, while the second GPS epoch began on 26 August 1999, a receiver manufactured in January 2005 could have a “pivot date” of January 2005 + 1,024 weeks coded into its firmware – meaning it will function smoothly until August 2025.

Therefore, a week number rollover issue may not manifest on 6/7 April 2019 itself. So, a receiver may continue to work as normal for weeks or months after 6 April but will still reset when its 1,024 weeks are up.

Is this a real problem and what is the likely impact?

Many GPS-dependent systems can be affected by the issue. Several recent reports to the US Coastguard Navigation Center’s GPS Problem Reporting database, https://navcen. uscg.gov/?Do=GPSReportStatus show that the issue is spread across industry sectors, and reveal the kind of behaviour an uncorrected receiver may exhibit. In one of the reports from December 2018, a surveyor in North Carolina reports:

“GPS unit has ceased to display valid date and time information and reverted to the year 1999. I contacted the manufacturer who denied any manufacturing defects and could not offer a solution except to obtain another device at my expense (out of warranty for several years).”

This report is probably related to a receiver developed late in the first GPS epoch, as we shouldn’t start to see second-epoch problems until after 6 April 2019. But it also serves to underline the fact that we won’t see all issues manifest themselves on 06/07 April but rather over a period of several years due to the implementation of a hard-coded pivot date.

In an affected receiver UTC timing could be displayed and the time tags of receiver data containing PNT information could also jump by 19.7 years Any month/year conversion is also likely to fail. Any external system depending on the GPS receiver to provide it with date/time information is likely to encounter issues with incorrect data.

How easy is it to determine whether a receiver is likely to be affected by the Week Number Rollover?

It’s very easy to check whether a receiver is vulnerable to the Week Rollover problem: –

1: Identify where older GPS receivers are used in your devices or systems architecture and check the receiver manufacturer.

2: Find out if the manufacturer has issued an advisory and see if you need a firmware update. You may be able to find this on their website, or you can contact them directly.

3: It’s very quick and easy to test the receiver using a GPS simulator. GPS simulation is a very powerful way of checking for configuration problems such as this and compliance with GNSS ICD parameters. If you have any doubts about a GPS receiver’s ability to cope with the Week Number Rollover, this is the best and most certain way of finding out.

4: If your receiver is affected and there’s no firmware update available, you will probably have to replace it.

Won’t this just happen again at the end of GPS Epoch 3?

No – GPS now uses a 13-bit field set the week number and most newer GPS receivers make use of this 13- bit field. A GPS epoch in 13-bit data will last for just over 157 years.