The Asia-Pacific regional geodetic reference frame, presently characterized as a patchwork of national and regional datums, is below the standard that is now available, and expected, in other regions of the world such as Europe (Bruyninx et al, 2001), South America (Luz et al 2002) and North America (Henton et al 2007). In contrast to these other regions, the reference frame of the Asia-Pacific is comparatively sparse, inhomogeneous in accuracy, infrequently realized, often difficult to access, and while there are a number of high-quality Global Navigation Satellite Systems (GNSS) networks the inter-relationships between networks are poorly understood as is their linkage to the global frame, the International Terrestrial Reference Frame (ITRF) (Altamimi, 2007). Commencing in March 2010, as an initiative of the Permanent Committee on GIS Infrastructure for Asia and the Pacific (PCGIAP) and the International Association of Geodesy (IAG), the Asia-Pacific Reference Frame (APREF) is a regional GNSS-coordination effort which aims to address these limitations.

The broad objective of APREF is to create and maintain an accurate and densely realized geodetic framework based on continuous observation and analysis of GNSS data. This regional framework is to provide improved support for positioning applications in hazard assessment, mining, agriculture, construction, emergency, land, utility and asset management by improving access to GNSS data and the International Terrestrial Reference Frame. In this paper, we highlight the progress of the APREF initiative and review the first results.

APREF is mandated by Resolution 1 (Regional Geodesy) of the 18th United Nations Regional Cartographic Conference (UNRCC) for Asia and the Pacific, 26 – 29 October 2009, Bangkok, Thailand. Demonstrating a broad community desire to improve the reference frame it is also endorsed by the International Global Navigation Satellite System Service (IGS), the United Nations Office for Outer Space Affairs (UNOOSA) and the Federation of International Surveyors (FIG). APREF is a voluntary, collegial, non-commercial endeavour, and has to date encouraged wide participation from government agencies, research institutes and the private sector. There is no central funding source and each participating organization is contributing their resources. APREF is encouraging the sharing of GNSS data from Continuously Operated Reference Stations (CORS) in the region while also developing an authoritative source of coordinates, and their respective velocities, for geodetic stations in the Asia-Pacific region. 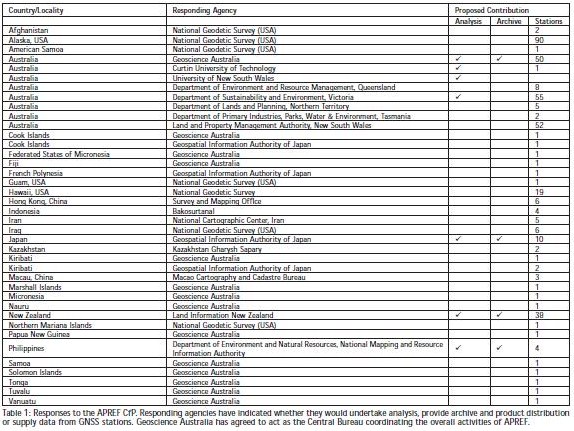 In response to the March 2010 Call for Participation (CfP) a large number of agencies have agreed to participate in APREF, Table 1 summarizes their commitments. APREF products presently consist of a weekly combined regional solution, in SINEX format (Blewitt, 1994), and a cumulative solution which includes velocity estimates. In addition to those stations contributed by participating agencies, the APREF analysis also incorporates data from the International GNSS Tracking Network (Dow et al 2009), including stations in the Russian Federation (16), China (10), India (3), French Polynesia (2), Kazakhstan (1), Thailand (1), South Korea (3), Uzbekistan (1), New Caledonia (1), Marshall Islands (1), Philippines (1), Fiji (1), and Mongolia (1). Figure 1 shows the current distribution and the number of weeks that stations were included in the

Figure 1: Number of weeks that stations were included in the APREF solution (from GPS Week 1512 until 1597)

APREF processing from early 2009 (GPS week 1512) until June 2010 (GPS week 1597). The increase in the number of stations reflects both greater participation in APREF and the inclusion of additional IGS stations in the analysis.

The first APREF products consist of weekly ITRF2005 coordinate solutions for the stations in the APREF tracking network. The procedure that leads to the combined solution is illustrated in figure 2. There are currently two active APREF analysis centres, Geoscience Australia (GA) and the Curtin University of Technology (CUT), and both undertake analysis using the Bernese GPS Software Version 5.0 (Dach et al. 2007). Both analysis centres adopt a conventional approach to regional GNSS solutions where 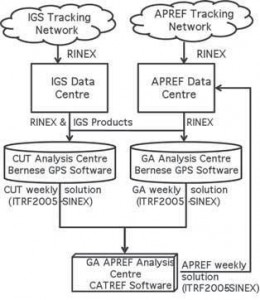 Figure 2: The procedure for generation of the APREF weekly ITRF2005 coordinate solution

satellite orbits and EOPs were fixed to the IGS final products. Station coordinates were estimated once every 24 hours and the datum was defined using a free-network approach. A Neill mapping function (Niell, 1996) was used and tropospheric delays estimated every hour and horizontal gradients in the N-S and E-W directions were estimated once every 24 hours. The site displacement modelling was consistent with the IERS Conventions 2003 (McCarthy and Petit, 2004) and ocean tidal loading corrections were applied according to the GOT00.2 model, which is an updated version of the GOT99 model (Ray, 1999). Satellite and antenna phase centre corrections were applied from the IGS05 model (Schmid et al, 2007). Carrier phase ambiguities were resolved in a baseline by baseline mode using the Quasi-Ionosphere-Free (QIF) approach (Mervart and Schaer, 1994). The daily solutions were combined into a weekly solution at the normal equation level and subsequently converted into SINEX format.

The GA and CUT solutions were combined using the procedures and algorithms implemented in the Combination and Analysis of Terrestrial Reference Frames (CATREF) software (e.g., Altamimi et al. 2007). Specifically, the alignment of the weekly solutions is undertaken using a Helmert transformation in a minimal constraint approach. Approximately 250 stations are presently included in the analysis. Besides the combined APREF solution the individual contributions of the analysis centres to the combined solution are also available for further analysis.

Figure 3 shows example coordinate time-series for stations Alice Springs (ALIC), in the centre of Australia and Pago Pago (ASPA) American Samoa in the Pacific ocean from the GA APREF analysis. The input data are the GA, daily, operational SINEX products and were combined using the CATREF software. Each daily solution is aligned to the combined solution by application of a seven parameter (Helmert) transformation. Estimated discontinuities are indicated by a vertical red line, which for ASPA station are co-seismic in origin. 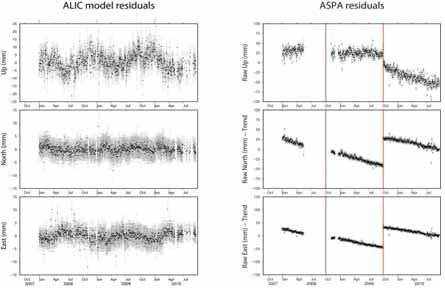 The major objective for APREF in the short term is to encourage greater participation to support ITRF densification in the region. In particular, new additional analysis centres need to be identified to support the development of a more robust regional solution.

The CUT GNSS Research Centre will continue to act as an analysis centre and plans integration of GLONASS in the daily processing in the near future to improve the APREF solution and to include next generation GNSS/RNSS systems when they become available. New products from the Curtin AC will include site specific troposphere values and regional ionospheric maps. As a user of APREF the group will rely on the data from the APREF network, the combined APREF solutions and the individual analysis centre results for its research on next-generation GNSS, atmosphere and optimal GNSS data processing algorithms.

The APREF initiative recognizes the importance of improving the regional geodetic framework in the Asia-Pacific region. The cumulative combination of the APREF solutions will be contributed to the International Association of Geodesy (IAG) Regional Dense Velocity Field Working Group. The APREF Call for Participation will remain open for all organizations until December 2010.

The combined APREF solution is available from the APREF archives, the first operational archive centre for APREF is run by Geoscience Australia.

The authors would like to thank all the APREF participates, the Permanent Committee on GIS Infrastructure for Asia and the Pacific (PCGIAP) and the United Nations Office for Outer Space Affairs (UNOOSA) for their ongoing support. The second author publishes with the permission of the Chief Executive Officer, Geoscience Australia. This study made use of GPS data collected through the AuScope initiative. AuScope Ltd is funded under the National Collaborative Research Infrastructure Strategy (NCRIS), an Australian Commonwealth Government Programme.

The third author is the recipient of an Australian Research Council Federation Fellowship (project number FF0883188): this support is gratefully acknowledged.

Altamimi, Z., Collilieux, X., Legrand, J., Garayt, B., and Boucher, C.: ITRF2005: A new release of the Interna- tional Terrestrial Reference Frame based on time series of station positions and Earth Orientation Parameters, Journal of Geophysical Research. 112:B9 (2007), B09401.