Three-dimensional surveying technologies adopted in the mining and quarrying industry offer great benefit to the management of these production sites.

To date, the most popular instruments for 3D data acquisition have been mainly terrestrial laser scanners (TLS), based on LiDAR technology, with very high accuracy (2-3 mm). Unfortunately, the time required for data acquisition and post-processing, as well as the need to often use targets for scans relative alignment, have limited their uptake in the mining field. Besides, performing static scans into operating mines can be critical for accessibility, interference with normal excavation and transport activities, as well as for surveyors’ safety during the acquisition.

The introduction of SLAM-based indoor mobile mapping (iMM) systems is revolutionizing this scenario, promoting greater adoption of 3D surveying technology in this area as well.

As everyone probably knows, the iMM concept involves surveying indoor areas with an instrument equipped with a multi-beam LiDAR sensor coupled with an inertial system, all managed by a simultaneous localization and mapping (SLAM) algorithm that calculates the surveyor’s trajectory and generates the accumulated registered 3D point cloud of the surveyed area. A critical aspect of this technology is the accuracy, considering that multi-beam sensors typically provide around 2-3 cm and, for several purposes, this still represents a sort of limit. But not for mining applications where such level of accuracy is more than sufficient, as they do not need the precision and resolution provided by TLS systems. On the contrary, iMM systems allow for greater survey efficiency, with a drastic reduction in data acquisition and processing time, resulting in lower overall survey costs.

These 3D mapping systems are profitably used in various applications, both in traditional and new industries. These undoubtedly include surveying activities in deep mines to estimate the volumes of material extracted, i.e., for what is known as production progress mapping.

When the survey must also produce the 3D geometry of the underground mine, with expected accuracy of 10-20 cm, it is necessary to constraint the survey to topographic control points surveyed with a total station and by means of benchmarks generally placed on the vault of the mine tunnel. But even in this case, the overall productivity advantages of the SLAM approach are not lost. 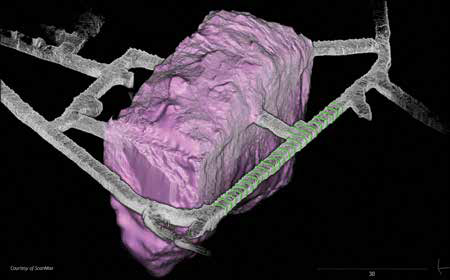 Another relevant feature of SLAM technology especially in this area is the ability of some of these systems to be vehicle mounted. This allows surveys to be carried out at speeds of 15-20 km/h in excavation tunnels, further increasing productivity compared to standard procedure, which usually requires the operator to wear the instrument like a backpack or hold it in his hand.

The versatility of iMM systems allows us to take advantage of them in different mining needs, for example, to survey vertical shafts that often require a 3D mapping to verify the erosion of walls, to update dimensions, to perform clash detection analysis and more. Compared to the existing technologies, the SLAM systems are dramatically faster and almost every site can be mapped ensuring surveyors with a high level of safety. 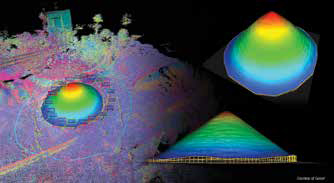 The iMM approach is also particularly flexible: the instrument can be used both in extreme situations, such as inside deep mine tunnels, but also to calculate volumes of material stored outdoors in open storage areas. In open-pit quarries and for stockpiles estimation, the use of drones for surveying based on the photogrammetric approach is becoming increasingly popular. The iMM approach integrates well with this technology and is primarily used when the stockpiles are inside sheds or when there are only a few piles to map and therefore the drone approach is not productive enough due to the limited mapping area to be investigated.

In conclusion, all the features described – the ease of use, the speed of data acquisition and processing, the versatility and productivity of the system – are undoubtedly the characteristics that justify the successful use of iMM technology for 3D mapping in the mining industry.