Studies on revitalized Glonass from India

Global Navigation Satellite System (GNSS) is now becoming increasingly popular because of its several advantages. Along with the operating GPS, revitalized GLONASS was declared fully operational since 2011 end[1] and worldwide efforts were noticed for developing similar new global and regional systems and a new term ‘Multi-GNSS’ was coined by the GNSS community to describe the situation. Efforts from India during the late 90s showed the benefits of GLONASS in a stand-alone and in integrated modes of operation with GPS [2]. Therefore, it is interesting to study revitalized GLONASS again. This paper presents the results on capabilities of GLONASS from India, based on long-term data using two types of GNSS receivers with special emphasis on GLONASS-based low-cost, single-frequency and standalone GNSS solutions. The discussion is subdivided into two parts- brief discussion on GLONASS modernization evolution and study results underlining the utility and advantages of presence of GLONASS respectively. The paper is expected to provide a general impression on the advantages of GLOANSS from India in its post-2011 revitalized form.

After successful operation of GLONASS during the 1990s [2], the system became unusable since the beginning of 2000 due to non-replenishment of satellites. A GLONASS revitalization plan was declared by the Russian authorities in 2004 [3] and accordingly, 40 GLONASS satellites were launched between December 2004 and December 2014. As of mid-April 2015, there are 28 GLONASS satellites in the fl eet – 24 fully operational, 1 Spare, 2 in Flight Testing phase and 1 under check, populating each of the three GLONASS orbits with 8 operating satellites that are launched in or after December 2006 and have been operating since early 2007. Latest operating GLONASS satellite was launched on March 24, 2014 (#754), while the last one launched on December 1, 2014 (# 702) is in Spare state. The revitalization process of GLONASS has been studied by us [4, 5] and a stable constellation is observed over the last 3½ years. Therefore, studies on the usability of GLONASS from India have been taken up. This would help in understanding the potential of GLONASS for the stakeholders with regard to its mass-market applications and in increasing confidence among its users. 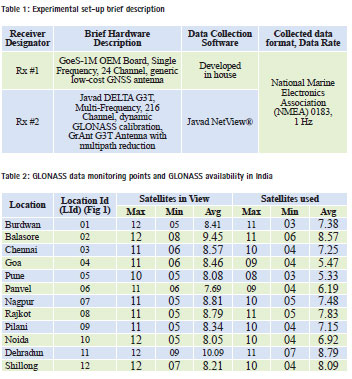 To study GLONASS capabilities from India, GNSS (GPS, GLONASS and GPS+GLONASS (MIX)) data using L1 C/A was monitored during 2012 – 2014 from a fixed location, Burdwan, marked as ‘1’ in Figure 2 using two GNSS receivers- Rx #1 and Rx #2. Data from few other points scattered over the country were also collected using Rx #1 for 3-4 days during August – November, 2012. Data monitoring points are shown and described in Figure 1 and Table 2 respectively, and brief hardware and software descriptions are presented in Table 1. General experimental set-up for data collection consisted of the GNSS receiver, PC and external rooftop mounted GNSS antenna. Useful data extracted from the recorded NMEA data stream include date, time, navigation solutions, DOP values and information about all used satellites for each observation. 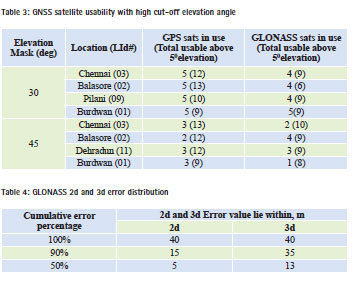 Presence of GLONASS with GPS is expected to provide more number of usable satellites. ‘Skyplots’ are presented in Figure 2 using data from two locations; here the elevation angles are shown radially with the centers indicating zenith, and the azimuth angle is shown along the circumferences with top of the figure indicating North. The figures indicate, as expected, that larger number of GNSS satellites are visible in each quadrant of the sky. The situation is useful for system independence and redundancy, providing a better Signal in Space (SiS) scenario, in mitigating atmospheric effects in GNSS solutions which is a vital issue for Indian and other equatorial regions [6], and it may benefit the atmospheric research efforts. It is found that in limited GPS satellite visibility conditions due to obstructions (urban canyons or deep foliage), GLONASS satellites may augment the situation. Results of such a study with intentional elevation angle masks are shown in Table 3. Here the elevation cutoff angle for satellites is intentionally increased to 300 and 450 to simulate a canyon-like environment and the receiver is operated in MIX (GPS+GLONASS) mode. It is seen that, for a 450 elevation mask, requirement of four satellites for 3D solution is fulfilled using using both the systems together. For these situations, MIX-mode may help in uninterrupted navigation fixes.

An important aspect of understanding GLONASS utility is to analyze the achievable accuracy. We analyzed short and long-term solution accuracy obtained using all-in-view GLONASS C/A L1 signal without augmentation or correction inputs. Initial results suggest higher variation of North errors over East errors. For detailed analysis, errors for individual solutions w.r.t. to a reference point are calculated. Reference points for both GNSS antennas (for Rx #1 and Rx #2) at Burdwan (LId #1) are calculated using long-time GPS-only solutions; the average values are taken as the reference latitude (La0), longitude (Lt0) and altitude (h0) for each individual antenna [1]. Errors in 3 Dimension (3D) and 2 Dimension (2D) in meters for individual solutions w.r.t. the reference were calculated using the following equations. Here that 1 minute of arc of the earth curvature is assumed to be equivalent to 1852 m,

For comprehensive analysis, GLONASS only data collected over a month (say January 2012) are combined and analyzed. It is seen from data collected for few months using Rx #1 that average 2D GLONASS (horizontal) error remains within 10 m, while 3D errors lie within 20 m. Here, we are trying to present the GLONASS solution capability using stand-alone, single frequency and low-cost GLONASS receivers. Therefore, more analysis using data from Rx #1 are presented.

Average errors for a month hardly provide information about the distribution of error ranges, and therefore, a different approach is adopted. 2D and 3D errors for all measurements for a month are subdivided into several ‘error range bins’. Variable widths for the ‘bins’ are taken for different error-ranges. For a month,number of samples falling in a particular bin and percentage of occurrence in the bin is obtained considering the total number of samples for the month. Cumulative percentage of occurrence for a bin is calculated by adding all occurrence values in same and higher error bins. Obtained results are shown against the higher class boundary of the concerned ‘bin’. Distribution of error values for achievable 2D and 3D accuracies of GLONASS solutions for few months are shown in Figure 3 for Rx #1. Summary of the results obtained from Figure 3 are presented in Table 4. 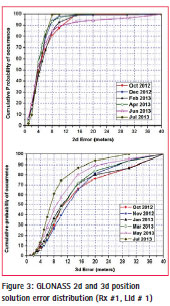 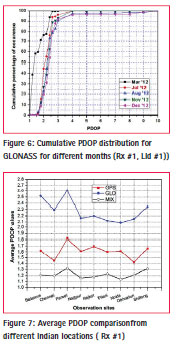 Solution accuracy of GLONASS in Multi-GNSS

In a developing Multi-GNSS scenario with fully operating GLONASS, it is interesting to study the effects and possible benefits of combining GLONASS with existing GPS from India.

To see the effect of GLONASS in a MIX-mode operation, a study was made using receiver Rx #2 on May 27, 2014. Increasing GLONASS signals (01 to 05) were used sequentially with 4 GPS for MIX solution and data for 10 to 20 minutes, as available, were collected for each combination. Average 2D and 3D error values for the combinations were calculated using equations (1) and (2) and the results are shown in Figure 4. It may be noticed that increasing number of GLONASS contributes proportionally for enhancement of achievable accuracy in MIX mode that forms the basis of understanding the contribution of GLONASS in a Multi-GNSS operation.

Next study compares 2D and 3D accuracies of single and multimode GNSS operations. GPS, GLONASS and MIX data collected for different months were analyzed following the same procedure used earlier to calculate cumulative position error percentage for a specific error range. Sample data for two months using Rx #1 is shown in Figure 5. Inspection of the graphs reveals that both 2D and 3D errors in GLONASS were higher than those for GPS and MIX mode provides the lowest possible errors. This emphasizes the potential of GLONASS for use with GPS in tandem for low-cost and stand-alone applications and also points towards the benefits of Multi-GNSS. 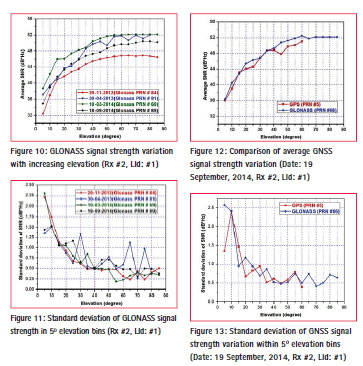 Observations on offered satellite geometry in GLONASS, GPS and MIX operations are presented here. Available data in each mode using Rx #1 from different locations are collected and grouped based on PDOP range bins of variable widths. For each GNSS mode, percentage of occurrence of PDOP and cumulative occurrences are calculated for a range bin. Figure 6 shows the cumulative PDOP distribution for GLONASS operation for few months where the percentage values have been showed against higher boundary of the bin range.

Comparison of average PDOP in GPS, GLONASS and MIX operation modes obtained from different locations are presented in Figure 7. A more detailed comparison of PDOP in these modes is presented in Figures 8 and 9 that show the distribution and cumulative values of PDOP distribution respectively. Figures 7, 8, 9 and similar results for other months implies that GLONASS alone provides inferior geometry but helps in obtaining best configuration through MIX operation [7].

Simultaneously obtained signals from GLONASS and GPS satellites are compared and results are shown in Figures 12 and 13. Inspection of results points towards increasing SNR values with elevation and saturation beyond 600 elevation angle. Interestingly, GLONASS seems to provide stronger signal strengths over GPS [8]. This result may be useful from receiver design purposes in TTFF considerations.

The results presented here are based on long-term study using data collected from scattered locations in India, and therefore is expected to be valid for the wide Indian sub-continent region. GLONASS, as the only current global alternative to GPS, is capable of providing system independence and redundancy to the users in stand-alone mode. With growing interest on Multi-GNSS, efficient use of GLONASS may play an important role in defining the GNSS business road map in the Indian region.

The presented results, using revitalized GLONASS, show sufficient visibility with good signal strengths and excellent satellite geometry for MIX operations. Accuracy provided by GLONASS alone is slightly inferior to GPS but supports MIX operation. It may be concluded that stand-alone, low-cost and single frequency GLONASS operation would be useful for the users of the Indian region, while more effort is needed for GPS-GLONASS interoperability and unexpected system failure issues [9].

With upcoming new global and regional navigation systems, in future, it would be of interest to study their performances and advantages in individual and in integrated modes of operations from India.

[2] Banerjee P, Bose Anindya and Dasgupta Ashis, The Usefulness of GLONASS for Positioning in the Presence of GPS in the Indian Subcontinent, The Journal of Navigation, Vol 55, 2002, pp 463 – 475