Scientific project for monitoring of geodynamic processes in Sofia

The study of recent crustal movements is one of the priority areas of the Earth sciences. Geodetic methods occupy a particularly important place in the general complex of measurements and investigations of crustal movements because they provide quantitative information on the condition and development of geodynamic processes. The area of interest of this study is bounded to the north of the southern slopes of the Balkan Mountains, to the south to the southern slopes of the Rila Mountains, to the west – the western border of Bulgaria and to the east – the beginning of the Upper Thracian plain. The region is of particular interest due to its high population density and high concentration of industrial facilities and resources. Possible strong earthquakes and related hazardous processes such as landslides, settlements and collapses may cause material damage and have a negative psychological effect on the population.

Neotectonic setting of the studied area

The area of Sofia is situated in Central West Bulgaria (Fig. 1). The present-day geodynamics of the area as well as the territory of South Bulgaria is defined by the neotectonic extensional processes in the South Bulgarian Extensional Region (Burchfiel et. All, 2000), part of the broad East-Mediterranean – Balkan Extensional system. The extension is in a general N-S direction which results in tectonic structures with general trend NWSE to E-W. These structures are clearly expressed morphologically and define the topography of the area– elevated mountains and subsided lands. In Rila Mountain is located the highest pick of the Balkan Peninsula – Mousala (2925 m). A central position in the area has the Sofia plain which from tectonic point of view represents a neotectonic graben with complicate internal structure bordered from both sides by active faults. To the south by the Vitosha fault and to the north by the Sub-Balkan fault system (Negushevo fault system). The last fault system has a crucial role for the topography of the country forming Stara Planina (The Balkan Range) and dividing the country into two sharply distinguished morphological units. This fault was accepted to limit the northern boundary of the Aegean extension (Burchfiel et. All, 2000). However, the presence of Botevgrad graben in the studied area to the north suggests that extension, even locally has occurred further to the north inside the Stara Planina Mountain (The Balkan Range). Beside Sofia graben in the area along this fault are formed some smaller graben to the east (Sarantsi, Kamartsi and Zlatitsa), part of the Sub- Balkan Graben System (Tzankov et. All, 1996). In the area of Sofia historically are known few several stronger earthquakes with suggested magnitudes 5.5 – 7.0 (Yosifov et. All, 2018). The last one of magnitude Mw 5.6 occurred on May 22th 2012 to the NW of Sofia around Pernik town (Radulov et. All, 2012) along a fault zone suggested to be presently active based on GPS data (Kotzev et. All, 2005).

To study the modern movements of the Earth’s crust during the period 1996- 1997, a geodynamic network was built in the area around Sofia, covering Central Western Bulgaria. The network is designed for high-precision GNSS measurements, determination of coordinates and velocities of points, calculation of active strain in the area and long-term monitoring crustal movements. The first GNSS measurements of the Sofia Geodynamic Network were made in 1997. Full measurement of the entire network with processing and analysis of the results has so far been performed only in two epochs 1997 and 2000 (Kotzev et al., 2001a; Kotzev et al., 2006, Dimitrov et. All. 2020).

At the end of 2019th, the project “Monitoring of geodynamic processes in the region of Sofia” of the Department of Geodesy, the National Institute of Geophysics, Geodesy and Geography at BAS, funded by the National Research Fund, was launched. This allowed for a new comprehensive measurement of the geodynamic network. The campaign was accomplished in the summer of 2020th and the data were recently processed. The estimations were performed GAMIT/GLOBK software. All obtained velocities are relative to Eurasia (Dimitrov and Nakov, 2020), (Fig. 1).

After the comprehensive measurement of the geodynamic network in 2020, a new campaign was performed in the summer of 2021. Three additional points were measured – BELM, SATO and LOZ2 (Fig. 2). Point BELM was measured previously in 1997 and 2020, point SATO was measured in 1996 and 2003. Because the original point LOZE was destroyed after the measurements in 2000, in 2021 we measured the duplicating point LOZ2, which was measured in 1997 but with shorter period of observation. In this reason the obtained result for velocity of this point has greater error, but still is reliable. The measurements are processed and analyzed with the GAMIT-GLOBK software (Herring et al., 2015, Herring et al., 2018). Estimation includes data from campaigns 1997, 2000, 2020 and 2021 years (Dimitrov and Nakov, 2021). The result is velocity vectors shown with an arrow that indicates the direction and speed of GNNS sites. All obtained horizontal velocities are relative to Eurasia (Fig. 2). 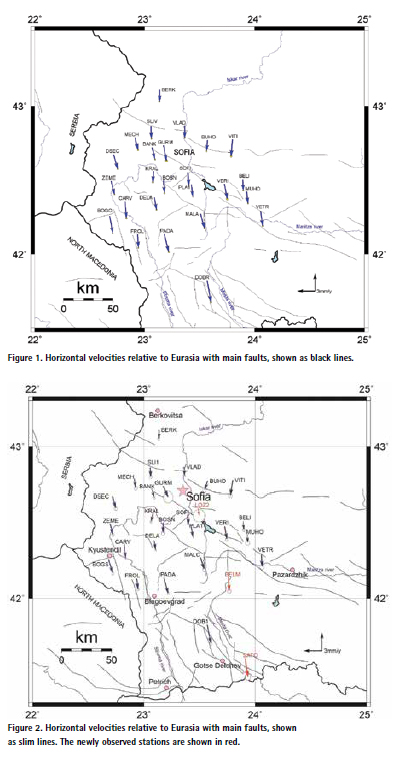 For this study all measurements were reprocessed with the GAMIT/GLOBK soft-ware v10.71, to obtain loosely constrained daily solutions saved in SINEX (Solution Independence Exchange format). For estimation of strain rate, the QOCA software (https:// qoca.jpl.nasa.gov/) is used to model site displacements, which involve all the campaign sites. We use velocities adjustment in strain rate analysis. Coseismic jumps and post-seismic deformations are removed in the time series. Principal strain axes of the horizontal strain rate tensors are estimated over the Delaunay triangles (Fig. 3). 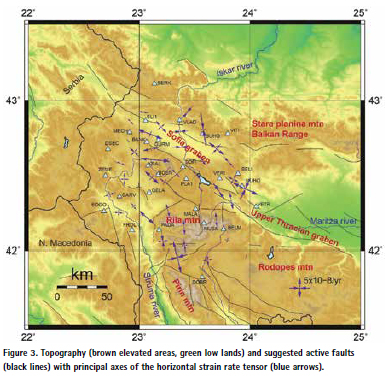 The preliminary results obtained for the strain rate show that the strain field is not uniform in direction and intensity and creates well-defined single areas with specific characteristics. The rapid change between dominant compression and stretching over short distances is one feature of the deformation field that should be noted (stations MEHSLI1- GURM-BANK; VERI-BELIMUHO- VETR; KRAL-BOSN-SOF, etc). The results for strain rates clearly show that presently Sofia graben and its surroundings are subject to a complex deformation and there is not a uniform extensional strain. The area to the north, encompassing stations VLAD, BUHO is under compression [15]. Principal strain axes of the horizontal strain rate tensors estimated over the Delaunay triangles are shown on Figure 3.

The area of Sofia is a moderately active geodynamic area. However, it is exposed at a significant geological hazard, based on the presence of numerous active faults, seismicity, landslides, rockfalls, etc. The area is one of the most important from economical and social points of view of Bulgaria. It hosts important infrastructure and is one of the mostly populated. Acquiring of new geodetic data will allow a better monitoring of geodynamic processes and better evaluation of geodynamics hazards.

The following more important results can be expected from the ongoing project:

• Determination of the active strain in the region from the results for recent crustal movements. Establishing correlation between earth crust movements, seismic events and tectonic structures;

• Complex analysis of geodetic, geological and seismotectonic information about the territory of Sofia;

The research project can be seen as a new stage in the study of an area with a clear seismic hazard. It is proposed to develop current issues related to the joint interpretation of geodetic, geological and seismotectonic information for the assessment of modern geodynamic processes. The expected results will be a contribution to the assessment of natural risk and seismic hazard in the study area and will have a positive impact for the sustainable development of the region.

This paper has been made available with the financial support provided by National Science Fund, call identifier “Competition for financial support of basic research projects – 2019” Project “Monitoring of geodynamic processes in the area of Sofia”. Contract No КП-06-H 34/1.