In 1999, United States Space Command stood up the GPS Operations Center (GPSOC), a GPS center of expertise providing direct support to warfighters and civil agencies that served civilian GPS users. It was incorporated into operations at the GPS Master Control Station at Schriever Air Force Base, Colorado. GPSOC duties included performing mission planning and post-mission assessment, which required knowledge of GPS satellite health in order to correctly model what the user was seeing. The models took signal availability into account by implementing the information in the NANU messages.

In order to smooth the operation of their analysis, the GPSOC created a machinereadable file called the satellite outage file or SOF. The Coast Guard started posting the SOF on its public website in 2017.

The problem with NANUs

Since the early 1990’s, NANUs have been a reliable means of notifying users of satellite outages. While every effort is made by the satellite operators to ensure NANUs are issued correctly, some NANUs have managed to slip through with errors. A survey of the various types of NANU errors is provided in the paper “NANU Analysis from 2007 through 2015” [1]. The paper identified a number of NANU fault types, including:

Because of these faults and their corresponding effect on user mission operations, GPSOC personnel explored ways to identify satellite outages dependably and with accuracy. The result was the SOF, a machine-readable file that containing pertinent information (Date, start/stop times, NANU type & number) for NANUs reporting satellite outages.

Description of the SOF

The SOF is formatted using extensible markup language (xml), which is both machine readable and readable by humans. For a detailed description of the SOF, refer to latest edition of ICD-GPS-240, Section 30 [2].

There are three types of entries in the SOF: PREDICTED, CURRENT, and HISTORICAL.

PREDICTED. The PREDICTED entry is used to identify future outages which are not yet underway. Figure 1 below presents a FORECAST OUTAGE NANU for SVN52 (PRN31) from Day of Year/ Time 004/0905 to 004/2105 in the year 2019. Figure 2 shows the NANU translated into a PREDICTED entry in the SOF identifying the outage as FCSTDV with the corresponding start and stop days/times. The types of NANUs identified in the SOF as PREDICTED are FCSTDV, FCSTMX, FCSTEXTD, FCSTRESCD, and FCSTUUFN. 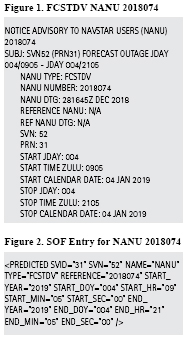 CURRENT. The CURRENT entry is used to identify satellite outages that are ongoing at the time the SOF is produced. The types of NANUs identified in the SOF as CURRENT are UNUSUFN and LAUNCH.

HISTORICAL. The HISTORICAL entry is used to identify outages that have occurred in the past and are completed. The types of NANUs identified in the SOF as HISTORICAL are FCSTSUMM, UNUSABLE, UNUNOREF, USABINIT, and DECOM.

The SOF is updated and posted after the 2 SOPS issues a NANU, although since additional checks are required prior to issuing the SOF, this update is not immediate. The U.S. Coast Guard Navigation Center (NAVCEN) posts it to their site within a few minutes, which is available here: www.navcen.uscg.gov.

In addition to the NAVCEN, several companies post copies of the SOF as a convenience to their users. Analytical Graphics, Inc. (AGI), posts to this site: http://navigationservices.agi. com/SatelliteOutageCalendar/ SOFCalendar.aspx.

SOFs are actively used on a regular basis by many users. T.S. Kelso of CelesTrak reports that on his site alone the SOF file is being downloaded between 10 and 18 times a day. [3]

The author shares several observations on the behavior of the satellite outage file since its inception in 2004.

By and large the SOF matches the NANUs that are issued, yet there have been times when this is not so. For example, in 2011, the SOF omitted NANU data from February through July [4]. This was subsequently corrected by the satellite operators. As another example, a SOF downloaded in August 2020 included entries for predicted outages for satellites that had been decommissioned and were no longer in the almanac (SVN34/PRN18, SVN60/PRN23, SVN41/PRN14).

Several users have observed significant delays in the SOF being issued following NANUs. This issue of latency is an important one for users, since they rely on the timeliness of outage notifications for their services. The author conducted a survey of SOF timeliness for NANUs issued between January and mid-August 2020. Of the 36 SOFs analyzed 50% of them were issued within one hour of the NANU, 95% were issued within three hours. The other 5% were a combination of various times, including more than 3 hours and SOFs being issued prior to their associated NANUs.

Benefits of the SOF

The SOF offers a number of benefits for its users. The SOF XML format is well understood and defined by schema, allowing programmers to write code that can interpret the SOF without misunderstanding. Utilizing the GPS outage data from a SOF file removes ambiguities in processing NANUs. While NANUs provide the same information as the SOF, their implementation is complex and occasionally inconsistent, making it not well-suited for machine interpretation. Users can suffer from misinterpreting the NANU-based data resulting in invalid results, such as inaccurate flight plans and post mission assessments. [5]

Following are examples of commercial and government uses in mission planning and assessment:

• The SOF has been an integral part of Analytical Graphics Inc’s (AGI) navigation software since 2008. Their Systems Took Kit (STK) has a Navigation Files Plugin that allows users to implement SOF files to model past, present and future GPS satellite outages for mission planning and post-mission assessments.

• OneSky, a Supplemental Data Service Provider (SDSP) for unmanned aerial systems (UAS) and UAS Traffic Management (UTM), incorporates the SOF to provide accurate navigation accuracy for the routes users are flying. It fulfills one of the FAA’s requirements for UAV flight planning.

• Air Transportation Planning. The SOF can help accelerate notification times, minimize errors in operation, and reduce customer service interactions. As an example, the FAA can use the SOF as a data feed in their Service Availability Prediction Tool, eliminating the need to manually resolve discrepancies in NANUs.

Implementation of the SOF has advanced the use of satellite outage information for satellite prediction and assessment tools. Its usefulness has been hampered by issues with accuracy and timeliness. As one user said “It is the perfect solution to many issues. But it has to be trusted.” [6]

In order to get to this point of trustworthiness and usability, several actions are proposed.

• Timeliness. Satellite operators should consider changes in processing SOFs to advance their timely release. As an objective, endeavor to achieve the timeliness values provided in ICD-GPS-240 for the NANUs, namely, within one hour after outage start (ICDGPS- 240, Table 10-IV) [2].

• Monitoring. Organizations responsible for validating the performance of GPS data should include a check of the SOF and make their intermediate results available to the satellite operators as a closed loop to ensure timely and quality products.

As more attention is paid to the quality and timeliness of the SOF, its use by mission planners and mission assessment organizations, both civil and military, will increase, allowing them to take advantage of the benefits the SOF is able to offer.

This article solely reflects the views of the author. The author gratefully thanks the following for their valuable inputs: Ted Driver (OneSky), T.S. Kelso (CelesTrak), John Wilde (SPACEKEYS), and Rick Hamilton of the U.S. Coast Guard Navigation Center for his dedication and perseverance in coordinating the public release of the SOF via the NAVCEN website.