A strong earthquake (7.8 RS) hit Nepal in 11.55 am Saturday, April 25, 2015 with epicenter in an area near Barpak village, Gorkha district, which followed by many powerful aftershocks, and new earthquake (6.7 RS) on Sunday, April 26, 2015 with epicenter in an area near border of Dolakha and Sindhupalchok districts. It causes extensive damage to buildings and other infrastructures, over 9000 death of people and over 5000 injured. It was felt in India, Tibet, Bangladesh and Pakistan.

Many old villages, historical monuments, and temples ruined, road ruptured and avalanches, landslides or stone falling triggered by earthquake. It was extensive damaged in 16 hill districts including of Kathmandu valley and need to plan and rebuild new towns.

Post earthquake precise leveling survey was also conducted after in 1988 in Nepal and some works on minimization of movement of heritage sites were also conducted in the past. Indonesia, Haiti, Japan and China conducted surveying works after recent great earth quakes. Places like Kathmandu valley may be studied better by LiDAR survey and carry out appropriate actions for conservation of heritage sites.

Engineering works need precise ground control points (cm accuracy in plannimetric and fraction of mm in height) to orient and check the quality of work and future deformation measurement of major constructions as well as need of precise BMs for irrigation, hydropower or tunneling work.

In this article, it is briefly described the suggestion of immediate survey and future activities of geomatic engineering to meet the immediate and future developments needs of Nepal.

Himalaya was formed due to collision of India plates to Eurasion plates. Indian plate is moving at the rate of 2.0 cm/year as north east direction and Himalaya is rising at the rate of 1cm / year as observed during crustal movement studies/ relevelling. The pressure is built up on collision plates, i.e. about 20 km below the main central thrust (MCT), the boundary line of Himalayan and high mountain regions. The great earthquake occurs every 80-110 years in Nepal to release the built up pressure. Minor earthquakes occur different periods. It will cause the minor movement of land mass few centimetres to few metres.

Many people observed the cracks of up to 0.5 meter size along the road and up lift and sinking of ground few meters are also observed.

Weaker structures will collapse or fall down and loss of lives due to damages of structures. Most of the time, rock fall, dry land slides and avalanche are also triggered in the hill side and Himalaya respectively.

The ground control points (trigonometrical points and bench marks) of known latitude, longitude and heights are determined in cm to mm accuracy. They are also subjected to shift the position with the movement of land masses. In Nepal, Trigonometrical points are established at 5 km interval and height points (bench marks) are established along the road at 2 km interval.

The topographical maps are prepared showing all natural and manmade features like road, canal, building and natural features includes land slide, forest, prominent tree, land form, water bodies. The scale of map in general is 1:25,000 /and 1:50,000 and town and development areas have 1:5,000 or larger scale maps which have better than 2-1 metre positional accuracy. The cadastral map of rural area is at the scale 1: 2,500 and urban areas are at the scale of 1:500. Generally, the movement is relative and is physically measurable at major fault areas.

The origin of survey is based on the fundamental station. The land mass is moving continuously and during the earthquakes, land slips abruptly. Nagarkot, Mahadev Pokhari station of Kathmandu valley, is the fundamental station of Nepal, which is the origin of latitude, longitude, height and gravimetric observations. It is fairly locked on Indian plate or has minor change with Indian points, points of Nepal south of main Boundary Fault (MBF), i.e. points of terai, hill and upper mountain are moving with Nagarkot in normal time. The seculars or annual change on measurement is adjusted based on the position or position of Nagarkot. 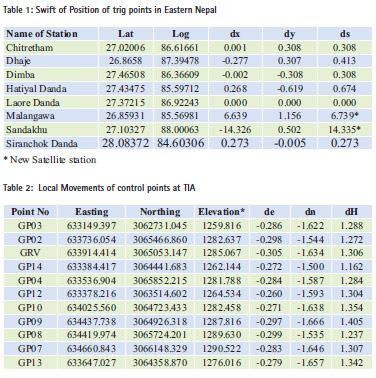 The ‘global navigation satellite system’ (GNSS) refers to a constellation of satellites providing signals from space transmitting positioning and timing data. By definition, a GNSS provides global coverage. GNSS receivers determine location by using the timing and positioning data encoded in the signals from space. The USA’s NAVSTAR Global Positioning System (GPS) and Russia’s Global’naya Navigatsionnaya Sputnikovaya Sistema (GLONASS) are examples of GNSS. The Galileo of EU, QZS of Japan and Beidou(Compass) of China systems are new systems under operational.

Effect of earthquakes on survey data

The trigonometrical points are observed and determined ±5 – 25cm accuracy in latitude and longitude and Bench marks (BM) are observed to determine height better than 1mm accuracy.

After 2045 BS (1988) magnitude 6.9 earthquake in eastern Nepal with epicenter at Udayapur district, the level lines were re-observed in that sector. The different in altitudes were observed and found that they moved irregularly.

During the Eastern Nepal Mapping project1992-96 some of the first order points were re-observed and the different of coordinates from 1982-84 fist order observation to 1992 Topographical Mapping Survey in dx and dy are found as following table 1 which shows that variation were irregular and up to 67 cm.

The local movements of control points at Tribhuvan International Airport(TIA) are shown as Table 2.

The researchers of Dr. Roger Bilham, Ms. Rebecca Bendick and Mr. Frederick Blume of Colorado University and staffs of Geodetic Survey Branch re-observed the trigonometrical network from Namche to Saptari which was observed in 1948 -52 by Ms. Gulatee in to observe the height of Mt. Everest in Nepal. Regarding to seismic movement of BMs during 1934 great earthquake, they observed that “ Repeated leveling revealed that some of them had sunk at least 1m during the event though this would not have change the scale.”… “It is likely that the points in the terai were approximately 1-4m more northward than the surveyors believed,”.. (Page 12, Report on Collaborative Geodetic investigations in Nepal, March1991- 1996),

In 26th June 2015, the magnitude 7.8 Earthquake struck Nepal and neighbouring countries and Survey Department re-observed some 5 stations and issued the following press statement on the movement of the points:

The earth quake affected area map (No.1) was prepared by USGS which is shown as Figure 1.

During the earth quakes of many building are collapsed and some are tilted. They are all cleared for new construction. People are still leaving tents and temporary houses. New construction will starts after end of rainy season. The comparative situation of Tripureswar, Kathmandu town area is shown on the orthophoto map and satellite imagery of the area as Figure 2. 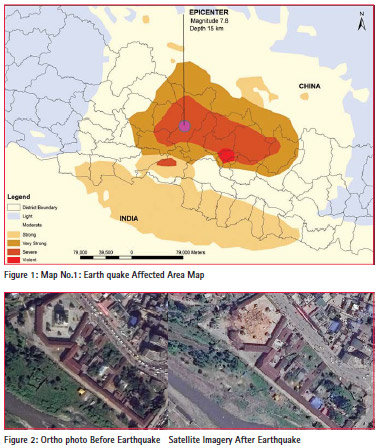 This shows that there are substantial change details of maps. The situation is worse in the maps of Kabhre, Sindhupalchok, Dolakha and other districts. The damaged buildings which are still standing are also unhabitable, required to remove and need to reconstruct.

The map (No.2) of the aftershocks of earth quakes 2015 in Nepal is shown National Seismological Center map shown in Figure 3. The topographical maps of strong, very strong and severely shacked areas (reddish area) of Map No. 1 need to revise for planning.

The cadastral maps are unaffected as the movement is relative and relative distances of parcel are same, as before except in areas of large cracks on land surface and MBT, MCT.

Monitoring and checking of control points

The engineering works and topographical mapping of large infrastructures need to base on accurate ground control points to check the quality of work i.e. calculate closing error, origin of x, y and height and orientation of survey work i.e. azimuth (bearing) of survey work with coordinates relative accuracy of 5-10 cm and height better than ±7mm.

The heights of BMs very strongly shaken area must be revised by relevelling and accordingly data corrected and supplied to users. 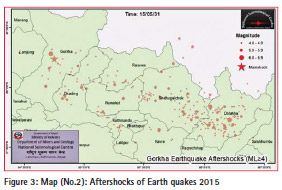 At 11h 56m on 25 April 2015, a 7.8 RS magnitude earthquake struck Nepal and surrounding nations. Shaking from the earth quake triggered an avalanche from Pumori into the base camp on Mount Everest at after noon. Twenty-two people were killed, surpassing an avalanche that occurred the previous year as the deadliest disaster on the mountain.

After the second earthquake on 12 May 2015, president of the Expedition Operators’ Association of Nepal, abandoned climbing on that season which resulted that no one climbed Mount Everest in the spring of 2015, the first time in 41 years that this has happened.

Many major roads were disrupted by major landslides and the main roads to Tibet from Kathmandu are recently operational. People also died by crashing the vehicles by falling rocks after earthquake or aftershocks.

As described above, it is required to reobserve the control points (trig point and BMs) of severely and very strongly shaken areas in the coming seasons and assess the situation of them and accordingly all the first order/ second order control points and BMs required re-observing. The third order points may be decided either for re-observation, recalculation or maintenance.

All topographical maps are due for revisions of plannimetric features by 15 years. The severely and very strongly shaken areas maps are needed to revise in the coming seasons and publish digitally. Other maps need revision periodically. Government may use private sector for revision.

The development programmes are delayed by 1-2 years due to unavailability of large scale (high resolution) maps, which will increasing project cost 10- 20% i.e. billions of rupees every year.

It is required to new digital mapping at the 0.5-2m resolution of the whole country to accelerate the infrastructure development of the country. LIDAR survey may be used for valleys and terai areas to cater the need of development and as well as detect movement of after the great earthquakes.

New settlements and infrastructures are required to plan, construct, and reconstruct and repair in severely affected areas. Lack of fund, land pooling method – the process of planning, development and redistribution of the assigned area, can be used for the development of land in the resettlement area. It evolves large scale topographical mapping, engineering design, cost estimation, land valuation, superimposition of cadastral data and returning the developed plots to the land owners.

The monitoring after earthquakes was carried out in the past for scientific studies. Presently high resolution maps and data are used for infrastructure development; meet the spatial data needs of municipalities and quality control of survey data. It is also required to plan new cities by land pooling process including earthquake damage areas. Therefore it is urgent to evaluate the existing control points.

It shows that there are vital roles of geomatic engineers from monitoring, evaluating the movement of control points and creation of spatial database for the planning, managing, and reconstruction of development activities after earthquake.

We like to express our sincere gratitude to DDG of Topographical Survey Branch and Geodetic Survey Branch, Survey Department for providing information and the Himalayan Collage of Geomatic Engineering and Land resources Management for encouragement to write this article.