The economic development of the past half century has transformed peoples’ way of life. In the field of transportation, the use of private cars to facilitate personal travel has increased exponentially. However, this increase is causing an array of problems, such as traffic congestion, environmental pollution and car accidents, which in turn has led to a rise not only in human and material loss but also in social and economic costs [1]. In response, advanced nations like the US, those of the EU and Japan are dealing with the ever-growing transportation demand by adopting Intelligent Transportation Systems (ITS) [2,3].
To enable the efficient operation of ITS, it is necessary to collect location data for vehicles on the road. In the case of futuristic transportation systems such as the project known as the Ubiquitous Transportation and Smart Highway, a method of data collection that is advanced enough to incorporate road lane recognition is required. To meet this requirement, technology based on Radio Frequency Identification (RFID) has been researched. However, RFID may fail to yield installing tags across all roads, which necessarily incurs an enormous cost.

Characteristics of the precise digital map

Precise digital maps have characteristics similar to those of the digital maps currently being used for vehicle navigation. However, because they must show lane information for the driver using carrier-based GNSS data, they differ from regular digital maps, as shown in Table 1.

In contrast, a vehicle navigation system, capable of lane recognition, has the dual purpose of providing route information to the destination and furnishing information about relevant road lanes. Therefore, it must store information about not only the geometric alignment of the roads but also the alignment of each road lane. In this instance, the center line of the road lane, which allows differentiation among the various lanes, serves as the reference for distinguishing the vehicle’s location. Thus, in order to mark the vehicle’s drive position according to the road lane, vehicle position marking information with a level of accuracy that allows for lane differentiation is needed. 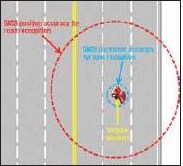 Vehicle navigation systems in current use calculate the vehicle location through the standalone use of code-based GNSS signals. When using a code to calculate the position of the vehicle, the resulting degree of accuracy is approximately 15 m (2D RMS), as shown in Table 2.

Table 2. The performance of GNSS

Digital maps are produced by converting a numerical map based on aerial photogrammetry into digital information for use on a computer or a similar device. The location information for structures such as roads or buildings contained within a digital map is assigned through control point surveys and aerial triangulation during aerial photogrammetry. The location error produced at this stage of the process becomes the location error present in the digital map. At present, digital maps are created on 1:1000 scale numerical maps; they are known to have an error of 1 m or more. When actual road driving results calculated using a commercial RTK program (Way Point) are marked on a digital map, the position of the vehicle apparently deviates from the road due to map error, as shown in Fig. 2. Therefore, a precise digital map must be made to coincide more closely with the actual geographical location of road lanes compared to existing digital maps. 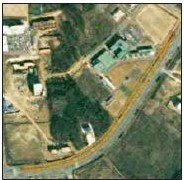 Performance analysis of precise digital maps test whether a vehicle calculating its position using GNSS carrier-based location data can recognize the actual drive lane while driving in different lanes. The lane recognition results are expressed as lane recognition success rates. The conditions of the analysis assume a vehicle driving along the center line of a lane measuring 3 m in width on a bidirectional four-lane, six-lane or eight-lane road with the precise digital map position bias and GNSS position error listed in Table 3.

In the case of GNSS error, carrier-based positioning can achieve an accuracy of within several mm, in theory. However, this assumes a favorable and static signal reception environment. In an actual road driving situation, surrounding buildings, roadside trees, and other features cause multipath error and reduced visibility, thus compromising position accuracy. Therefore, the accuracy of carrier-based GNSS position information is considered for the range of 0.5 m to 2 m. In the case of the precise digital map, the error characteristics of the linearization point are reflected in the configuration of the coordinates for other points during the process of linearization; thus, the error characteristics can be seen as a type of bias.

The lane recognition threshold is the threshold that allows a lane to be correctly identified when the vehicle is assumed to be driving along the center of the lane; its value is thus proportional to the width of the lane. The lane recognition threshold for each lane of the map bias to the right of the drive direction is shown in Eqs. (1)-(3). A vehicle whose position information was calculated as being over the centerline and in the oncoming lane is still counted as being in the innermost lane (Lane 1), as shown in Fig. 3. Similarly, a vehicle whose position was calculated as being off the road and on the sidewalk is still counted as being in the outermost lane (Lane n). 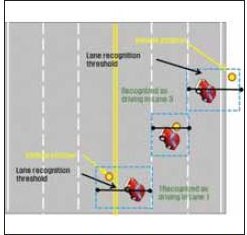 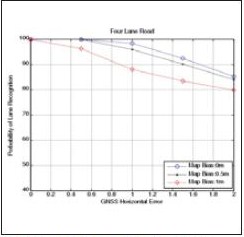 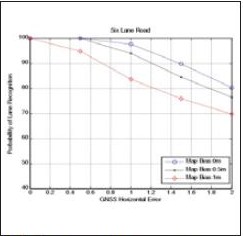 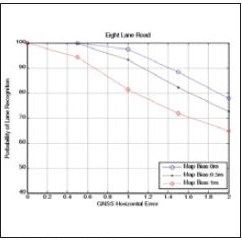 To verify the possibility of lane recognition using GNSS and a precise digital map, we performed actual road tests. The test site was Ochang, Chungbuk, in Korea, as show in Fig. 7. We developed a road lane recognition system consisting of a carrier-based GNSS receiver that included a precise positioning algorithm and a unique lane-level digital roadway database. We also developed a precise digital map to suit the performance requirement. To verify the accurate performance of the test, we drove while staying in one lane. We performed the test by traveling in different lanes as well.

The test results show the possibility of recognizing the road lane using CDGPS and a precise digital map, as shown in Fig. 8. The red line is the vehicle position as calculated by the carrier-based GNSS algorithm, the yellow line is center of the road, and the white line is the lane. 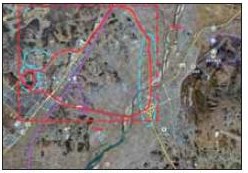 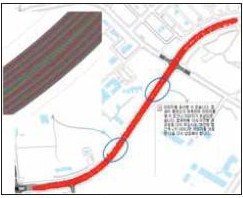 Support for this study was provided by Development of GNSS-based Transportation Technology of the Ministry of Land, Transportation and Maritime Affairs, Korea.