Rescue Magic – A true tale of search and rescue

In August of 1990, I was a U.S. Coast Guard Chief Petty Officer at the newly established Coast Guard Group Honolulu operations center. I managed day to day operations in the rescue center and radio room and was the primary searchplanner for the Group. We were very, very busy with search-and-rescue in this open-ocean, island environment.

One afternoon, the rescue center got a call from an Auxiliarist named “Mamasita.” Mamasita lived up on the west side of the Island of O’ahu. She was talking on her Citizen Band (CB) radio with a man that was in trouble on the water. The Coast Guard operates on HF (highfrequency) and VHF radios (veryhigh- frequency) but not CB. So, for CB, a hold-over from the 1970s longhaul trucker community, we depend on the help of the talented, all-volunteer assistance of the Coast Guard Auxiliary.

The man Mamasita was talking to on the radio had been a fi sherman his whole life. Reportedly, he would motor north from Haleiwa on the North Shore of O’ahu for one hour, fish for a few hours, and then return south for an hour back to Haleiwa, all without a compass. He had been doing this his whole life without a problem. On this day, he ran into fog on the way home. Fog is not usual in Hawai’i but that day there was fog….thick fog. He had been on his course back to the island for two hours and had not run up on shore. So, worried about fuel, he called for help.

Searching in fog is problematic and several of the islands were completely surrounded in dense fog. This was, possibly, a huge search area. Over the course of several hours, we tried, in vain, to determine the area where this boater was drifting. I say “we” because all Coast Guard search and rescue efforts rely on a team of highly trained and organized individuals, diverse people from all over the country serving the public for the greater good. We made an educated guess, given the position of Mamasita’s radio antenna, that he was somewhere off Makaha, maybe, but we could not be sure.

However hard they tried, the helicopter dispatched from Barber’s Point Air Station could not find a way around the fog. They could not just go right into it because the aircraft would have had to be right down on the water where risk of running into a boat or ship was way too high for the aircrew. The C-130 Hercules aircraft we had circling overhead kept confirming the persistence of the fog and, all the while, the un-located boater’s radio signal was geting weaker and weaker. As sundown approached, still with no way to establish the position of the distressed vessel, we lost contact. We had lost him. His radio had run out of power and we had lost him. Imagining the worst, I was horrified to think that, wherever he was, the next stop for this man was the Gilbertese Islands 3000 miles to the South. A previous, unsuccessful rescue case had shown that’s where the currents take you if you get lost on the very large ocean surrounding the Hawai’ian Islands. Search and rescue can be very personal. Any loss is very, very personal. I was devastated!

Then, the phone rang. A resident of Kaua’i was reporting that he was talking to a guy on the CB radio. “He says you guys are looking for him.” Yessss!!!! It was so obvious now. He’d been caught in the current that comes together from both sides of Kaena Point on O’ahu and was drifting across the Kaua’i Channel. He had just drifted out of Mamasita’s radio range as the strong current pulled him towards Kaua’i. The man on the phone then said “He says he has this beacon thing. You want him to turn it on?” This whole time, our boater had a Cospas- Sarsat EPIRB, an Emergency Position Indicating Radio Beacon, in the boat with him. Polar orbiting and geostationary satellites automatically relay the signals from these 406 MHz beacons to rescue centers with the position of the disabled boater. These days, in 2015, a 406 MHz EPIRB will also relay the Global Positioning System (GPS) coordinates of the beacon. Also, the new generation of GPS satellites will have Medium Earth Orbit Search and Rescue (MEOSAR) packages on them as we move Cospas-Sarsat from low earth orbit NOAA environmental satellites to GPS as the NOAA satellites reach their end of life. Once fully populated, every corner of the globe will be visible at all times to the SAR system for almost instantaneous receipt of the beacon distress calls. Worn out by the hours of anxious searching, but now very thankful for the satellite technology, I rubbed my weary eyes saying “Yes, that would be nice. Please tell him to turn it on.” 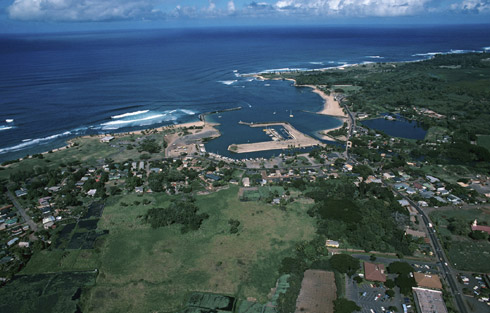 There must have been a satellite already overhead, in view of the Hawai’ian Islands because less than 5 minutes later we got a call from the Coast Guard Fourteenth District Joint Rescue Coordination Center. They reported an EPIRB hit in the Kaua’i Channel. Rescue organizations usually wait for a composite solution, a second hit in the same location to confi rm the distress call. That usually takes an hour and a half for another satellite to pass overhead and given what we knew, I wasn’t waiting. I immediately had the Radioman on watch call the circling C-130 and relayed the approximate location indicated by the Cospas-Sarsat system. 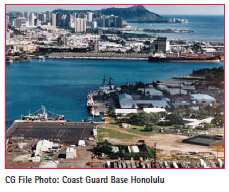 In earlier conversation with the pilot, I had asked him to consider lowering the aircraft’s back ramp when they found the vessel, fly low over it and start dropping orange smoke fl ares while fl ying in the direction of Haleiwa. The fi sherman could then follow the smoke all the way home. After quickly considering the coordinates, the pilot said he was very close to that position and “As it happens, there’s a hole in the fog here. I’ll dip down and see what we can see.” The boat was right there, right below the aircraft. All this happened in the space of ten minutes or so. The pilot dropped the smoke fl ares as we had planned and the fi sherman successfully followed them in to Haleiwa Harbor. 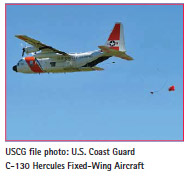 The next day I had a happy conversation with the wife of the fisherman to make sure she and our fi sherman were both OK. I had been in constant contact with her the previous day and she had been worried sick .for good reason. The Pacific Ocean can be mercilessly unforgiving of mistakes, (his, all for want of a compass). I suggested to her that a VHF radio would have made things easier. “Most Coast Guard boats, cutters and aircraft have VHF direction fi nding equipment and we could have gone directly to him.” Extremely grateful now for the U.S. Coast Guard, she said that her husband had told her “It was like MAGIC! I turn the beacon on and this huge airplane just fell out of the sky, just like that.” Still, I have no doubt his boat had a brand new VHF radio the next trip out to sea. Thankfully, another successful rescue, with much of the credit going to the amazing world-wide capabilities of the Cospas-Sarsat and GPS satellite constellations silently watching over all the sailors and fi shermen of the Earth and helping to take the “search” out of search and rescue.