Mass-market applications, ranging from self-driving cars, unmanned aerial vehicles (UAV) to handheld smartphones, are increasingly demanding high-precision from GNSS integrated with other enabling navigation sensors. This expectation is driven by the increasing availability of carrier phase measurements from very low-cost GNSS sensors of small form factor (chipsets or modules) that have been widely used by massmarket applications. Google has made raw GNSS measurements including carrier phase available from a phone or tablet computer. Broadcom has recently announced to launch a mass-market GPS chip that uses L1 and L5 signals to pinpoint a device’s accuracy to within 30 centimeters. Although the carrier phase measurements, particularly in challenging environments, are still subject to further improvement and verification by user applications, their potential to support precise positioning is just a matter of time before their wide adoption.

Precise positioning with low-cost GNSS sensors faces some significant challenges. Different from the conventional highprecision GNSS applications, only lowcost GNSS sensors are available for mass-market applications, while the existing high-precision GNSS techniques, either based on real-time kinematic (RTK) or precise point positioning (PPP) techniques, are mainly based on highend GNSS receivers and targeted only for professional applications such as geodetic surveys, airborne mapping, atmosphere remote sensing, precision agriculture, and marine positioning (Bisnath and Gao, 2009). Frequency carrier phase cycle slips and large measurement noise in low-cost GNSS receivers present a challenge in order to use them to achieve high-precision positioning solutions.

This paper will describe some recent work with an effort to address the abovementioned challenges, including cost and complexity reduction of correction services, precise positioning with low-cost GNSS sensors, and instant availability of precise positioning solutions in challenging environments. Numerical results from field tests are provided to demonstrate their potential to support mass-market applications.

Carrier phase measurements are generated from the phase lock loops (PLLs) of a GNSS receiver. Usually the GNSS receiver utilizes individual PLL to track carrier phase for each satellite, known as scalar carrier tracking techniques. But there is a dilemma problem to the design of the loop parameters in a conventional tracking loop. To mitigate the oscillator phase noise, for example, the loop filter bandwidth of the conventional scalar phase lock loop should be increased but an increased bandwidth will reduce the ability of the tracking loop to reject the thermal noise. Considering that the receiver oscillator and dynamic stress are common for different channels, the bandwidth of the channel loop can be reduced if the abovementioned common error can be estimated before the correlator for individual channels. This has led to the development and implementation of carrier phase tracking techniques based on vector architecture (Chen et al., 2017). Shown in Figure 1 are the single differences of carrier phase measurements based on vector architecture. The results indicate that no cycle slips are present for all satellites. If based on scalar architecture, cycle slips would present in carrier phase measurements to multiple satellites. 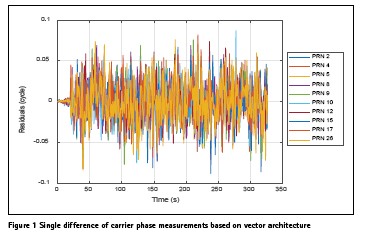 Current real-time satellite orbit and clock correction data generated at the server system are in essence the differences of precise orbit/clock with respect to the broadcast orbit/clock. As a result, the corrections must be transmitted to users at a high update rate (typically 1-2 minutes for orbit corrections and 1-10 seconds for clock corrections) in order to ensure sufficient accuracy. In the past, real-time precise orbit and clock corrections were available from only a few commercial suppliers, via communication satellites with dedicated hardware as well as significant subscription fees. This was once a limiting factor for developing realtime PPP applications (Gao and Chen, 2005). For mass-market applications, new correction services should be developed to address challenges related to bandwidth, latency and data transfer cost, although the development of the Networked Transport of RTCM via Internet Protocol (NTRIP) has made the correction data transmission easier and less expensive to access than the satellite-based correction transmission.

A new correction update based precise point positioning system was proposed in Gao et al (2015, 2017). Different from current real-time PPP systems, the server system generates real-time precise satellite orbit and clock initial parameters (IPs). Instead of corrections representing the differences of precise orbit/clock with respect to the broadcast orbit/clock, the initial parameters consist of initial conditions and additional crucial data for orbit and key coefficients for clock. Provided at selected reference time, the IPs can be applied by the users to derive corrections at any desired epochs before next update from the server system, for orbit through numerical integration and clock through extrapolation. This approach would allow scalable correction update rates for different applications, including lower update rates for the purpose of reducing system sensitivity to correction outages and communication cost, as required for mas-market applications. With reduced update rate on initial parameters, the requirements on continuous wireless connection can also be relaxed, making the positioning system less susceptible to temporary poor network connection and communication satellite signal blockage, particularly in challenging environments such as when a receiver is operating in urban canyons and under tree canopy.

Figure 2 shows the accuracy statistics of the orbit corrections generated by the users over a period of 12 h using orbit initial parameters. Daily solutions over a week are used to calculate the average RMS values, with respect to the IGS Final products. As the figure shows, the average orbit RMS values in all three directions are smaller than 6 cm for all GPS satellites, with average RMS values of the 31 satellites about 3 cm for the radial, along-track and cross-track directions. The results demonstrate that the initial parameters for orbit correction generation can be valid for a long period of time, allowing the adoption of much lower update rates than currently applied high update rates in applications. 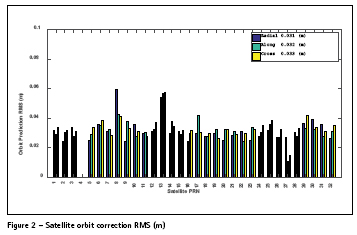 Table 1 shows the accuracy statistics of the clock corrections generated by the users over a period of 1, 2 and 3 hours using the clock initial parameters. The results indicate that the performance of user generated corrections depends on the type of clocks. For correction generation over 1 hour, the RMS values of IIR/Rb, IIR-M/Rb, IIF/Rb and IIF/Cs clocks are 0.41 ns, 0.35 ns, 0.24 ns and 1.12 ns. For correction genertaion over 6 hours, the RMS values of IIR/Rb, IIR-M/Rb and IIF/Rb clocks are smaller than 0.62 ns while the RMS value for the IIF/Cs clock is 1.83 ns. Compared to other types of clocks, IIF/Cs clock is much instable.

Mass-market applications demand quick and even instant obtainability of precise position solutions without initial or reconvergence. Further they also demand stand-alone operation without requiring base stations. Although PPP techniques able to eliminate the requirement on base stations, the required time for carrier phase ambiguities to converge or to be fixed to integer values are significantly long, typically at a level of several tens of minutes. This is not acceptable for most mass-market applications.

Two approaches can be focused in an effort to make precise positioning solutions quickly available in real-time applications. One is to focus on the reduction of the convergence time for the ambiguity float solutions. With the deployment of multiple GNSS systems, the combination of measurements from all available constellations, e.g. from fully operational GPS and GLONASS and partially operational Galileo and BeiDou, can help reduce the convergence time as a result of geometry improvement (Cai et al, 2015). Multi-GNSS approach alone, however, will not be able to totally eliminate the required convergence time. Uncombined positioning model is increasingly adopted which allows for the integration of additional information such as precise ionospheric products. The elimination of ionospheric effects has the potential to enable precise positioning solutions quickly available in real-time applications, but the improvement will depend on the quality of the ionospheric products. The obtainable positioning accuracy also depends on the efficiency of mitigating errors and systematic effects in the measurement models. With the moderization of GNSS systems including multi-frequency signals, triple-frequency based ambiguity resoltuion technqiyues have been investigated which, together with other advanced processing algorithms, has made fast PPP ambiguity resolution feasible (Wang, 2014). Considering single-frequency GNSS receivers are still dominated in the massmarket applciations, Figure 3 shows the positioning errors from a kinematic test, with the use of a low-cost single-freqeuncy GNSS receiver and real-time orbit, clock and ionospheric corrections. The results indicate that precise positioning solutions can be quickly obtainable (virtually no convergence period for the horizonatl solutions), which demonstartes its potential to support mass-market applciations. The two data gaps in the figure were caused by data outages due to loose cable conneciton resulting in power losses. 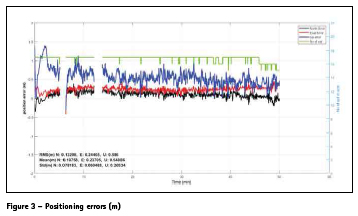 Since mass-market applications are often conducted in challenging environments, techniques to bridge the GNSS signal blockages are demanded in order to further improve the positioning system availability and robustness. Integration of GNSS with other low-cost sensors, such as low-cost inertial and vision sensors that are widely embedded in UAV, self-driving cars and smartphones, should also be investigated in order to develop low-cost and high availability and robustness positioning systems towards mass-market applications.

The contributions to the preparation of this paper from the graduate students in the Positioning and Mobile Information System group at The University of Calgary are acknowledged.