Ukraine has developed the Positioning & Timing and Navigation System using global navigation satellite systems (GNSS). This System has been established in the framework of the National Space Programs of Ukraine (1998-2012) and on the basis of standards adopted by the European project EUPOS. (Figure 1). 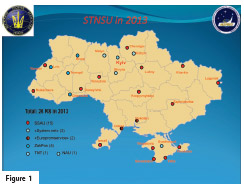 Main tasks of the System are:

-continuous monitoring of GNSS signals and integrity of radionavigation fields of the operational systems: GPS, GLONASS, and perspective EGNOS, Galileo and BeiDou GNSS; 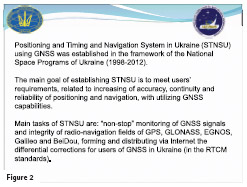 In this sphere, Ukraine demonstrates positive results of the public-private partnership through utilization of 10 state stations and 110 private stations. (Figure 5).

A few years ago, the SSAU on behalf of Ukraine participated in the EUPOS project, but due to force majéur the Ukraine’s involvement into the project became limited. Considering the Agreement on Association between Ukraine and the EU it is vital to reestablish full-scaled Ukrainian participation in the EUPOS project as well as in other international projects and forums in GNSS sphere. According to the Cooperation Agreement on a Civil Global Navigation Satellite System (GNSS) between the European Community and its Member States and Ukraine, which entered into force in 2014, Ukraine implements steps towards the extension of the satellite navigation system EGNOS and Galileo to Ukraine, and works in close cooperation with the European Commission experts to choose location for the RIMS installation in Ukraine. (Figure 6).

The extension of EGNOS to the territory of Ukraine is planned to be implemented through the ground infrastructure involving Ukrainian Integrity Monitoring Stations.

The “Ukrainian” RIMS will cover the entire territory of Ukraine as well as the eastern border of the EU (eastern part of Romania). The service will be provided within the land and air borders of Ukraine, where Ukraine is responsible for the international air navigation. (Figure 7). 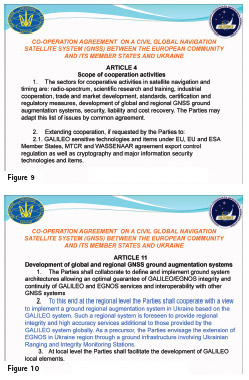 According to the Article 320 of the Action Plan on Implementation of the Association Agreement between Ukraine and the European Union and its Member States for the Years 2014–2017 approved by the Decree of the Cabinet of Ministers of Ukraine as of September 17, 2014, the SSAU was appointed in charge of the extension of the European satellite navigation system EGNOS to Ukraine. (Figure 8, 9, 10).

Within the framework of the EU technical assistance TWINNING Project “Strengthening of the SSAU Institutional Capacity to Implement European Space Programmes in Satellite Navigation (EGNOS/Galileo) and Remote Sensing (GMES)” several missions of experts to the SSAU had been organized, which were aimed at transferring experience and exchange of best practices in satellite navigation in the EU Member States and the development of Ukrainian legal framework in the field of satellite navigation and its harmonization with the European legal framework.

In order to study the best practices and work experiences of public entities and between commercial service operators and customers in satellite navigation 54 Ukrainian specialists from space industry took part in 6 Study Tours and 5 Internships. They visited INTA, European Satellite Services Provider – ESSP and other companies in Madrid (Spain) and European GNSS Agency (GSA) in Prague (Czech Republic). Besides, 647 experts from Ukrainian Space Agency, Space Industry and Official Bodies have participated at the working sessions of TWINNING Project. Therefore, Ukrainian specialists had a lot of opportunities to learn the working processes of the operators of satellite navigation services as well as ground infrastructure facilities of Galileo: control centers, satellite constellation control stations, control receiving stations, etc.

In order to discuss these Draft Laws the SSAU and the NSFCTC organized several round tables with participation of various stakeholders in space industry and Ukrainian ministries and organizations. Currently, the Draft Laws are submitted for approval to the Cabinet of Ministers of Ukraine. (Figure 11). 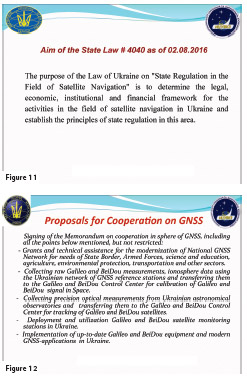 During several missions to Ukraine the European experts carried out analysis of the SSAU activity on the EGNOS/ Galileo extension to Ukraine. Ukrainian experts obtained knowledge about the technical aspects on the EGNOS/Galileo extension to the territory of Ukraine, its advantages and benefits, as well as about key sectors (transport and industry), where these systems will be applied.

During particular round table the Ukrainian specialists were presented recommendations for the State control over the satellite navigation activities and they succeeded in learning the experience of cooperation between public authorities, operators of commercial services and its customers. The representatives from other relevant industries (aviation, maritime, road transport, agriculture, etc.) also took part in those meetings.

The PRS service was of a great particular interest as it will be ensure secure use of Galileo system by the public entities.

Proposals on cooperation in the GNSS sphere. (Figure 12).

Taking into consideration vital importance of the space monitoring task and permanent interest of the international community to adhere to the legislation on the peaceful uses of outer space, great interest in solving problems of the safety of spaceflights, space debris accumulation issues, space weather monitoring issues (sun monitoring, solar wind, the Earth’s magnetosphere, ionosphere and thermosphere that can affect spacecraft and ground facilities critical infrastructure or endanger people’s life or health), Ukraine is constantly improving the existing software and hardware as well as develops new software and hardware for space monitoring. In cooperation with the leading scientific institutions of Ukraine, the National Space Facilities Control and Test Center conducts researches on space monitoring and administers the catalogue of space objects. (Figure 13). 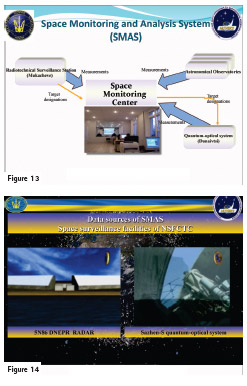 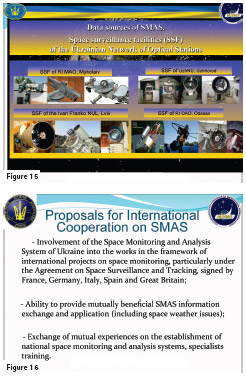 Considering the integration process of Ukraine to the European and global community and we would like to propose to consider the possibility of joint use of the above mentioned facilities. (Figure 16). Achieving these objectives could allow generating public benefits for the Ukrainian economy as well as creating science and business opportunities for both national and global companies