A couple of decades ago, it was necessary to collect carrier-phase data with at least two GPS receivers simultaneously within a few hours to make high accuracy positioning. Developments in the satellite geodesy and processing technique as well satellite and receiver systems, a method called as Real-Time Kinematic (RTK) Positioning using corrections for rover receiver from a reference station has begun to serve as an accurate and efficient surveying method for different users all over the world since the 1990s. This method also referred as Single Baseline RTK because single baseline solution is used in order to make positioning. On the other hand, the usability of this method is limited with the distance between the user receiver and its base station due to orbital, ionospheric and tropospheric biases that deteriorate the positioning. This also means, usability and performance of Single Baseline RTK method is highly dependent on the distance between rover and its reference station. The quality of the estimated errors degrades as a function of distance between the base station and the rover. In this method distance-dependent biases, such as orbital, ionospheric, and tropospheric biases deteriorate the positioning accuracy and depending on this, the baseline length is restricted to about 10-20 km (El-Mowafy 2012). When the baseline length increases, the errors at reference and rover receivers become less common and therefore cannot be cancelled out properly. This causes to lower positional accuracy when the longer distance was established during the Single Baseline RTK Positioning. 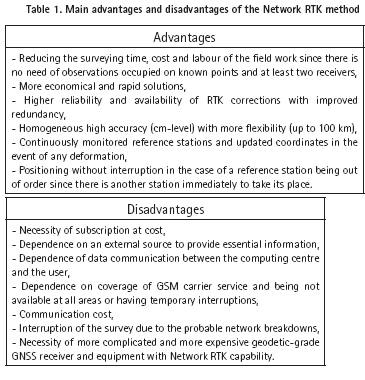 At the beginning of 2000s, multi-baseline RTK positioning, known as Network RTK, has resulted by adding real-time kinematic positioning ability to the established CORS Networks (Wanninger 2006). In this method, GNSS raw data gathered from the CORS Network in order to create models that can mitigate these errors acting within the CORS coverage area (Aponte et al. 2008). The number and extent of governmental and private Network RTKs all over the world have been increasing while reducing the positioning cost. Compared to Single Baseline RTK in Network RTK method, the distance-dependent errors mentioned above are modelled more conveniently especially for long baselines i.e. several tens of kilometres (Ogutcu and Kalayci 2016).

This improves the accuracy and reliability of positioning over extended distances and (Denys and Pearson 2016) this technique provides homogenous accuracy and better positioning. Thus, the most accurate real-time kinematic positioning method is Network RTK that uses corrections from a network of reference stations (Prochniewicz et al. 2017). In this method, there are several correction techniques that have been implemented and used like Virtual Reference Station (VRS), Flächen-Korrektur Parameter (FKP), Individualized Master-Auxiliary Corrections (iMAX), Master-Auxiliary Concept (MAC), and Pseudo Reference Station (PRS). Despite of its several important advantages which were mentioned above, this method has also some disadvantages. The main advantages and disadvantages of the Network RTK are summarized in Table 1 (Kahveci 2009; El-Mowafy 2012). 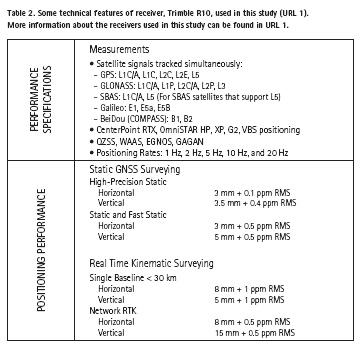 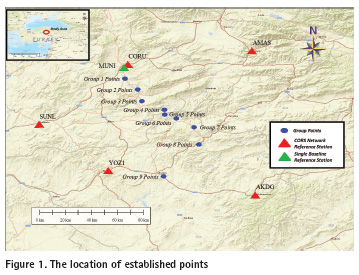 The Network RTK provides more convenient, cost-effective and real-time precise positioning and thus has been extensively used by surveyor. This method makes GNSS a very efficient tool for land, air, marine and numerous different types of applications where precise real-time positioning is required. More information can be found in Fotopoulos and Cannon (2001); Lachapelle and Alves (2002); Rizos (2002); Rizos (2007); El-Mowafy (2012) and Cina et al. (2015).

Many administrative entitles and private organizations have established their own Single Baseline RTK as well as Network RTK in all over the world. One of them was established and operated by Çorum Municipality, Turkey to serve Çorum province. Concerning the Network RTK, there is a network called as TUSAGA-Aktif (CORS-TR) and it has begun to serve for civilian users since 2009. This network has 2 Control and 146 Reference Stations with an average spacing of about 70-100 km as it is covered almost the entirely of Turkey and Turkish Republic of Northern Cyprus. In this system, VRS, FKP and MAC correction techniques are used. The coordinates can be obtained in ITRF96 datum and 2005.0 measurement epoch. More information about Turkish RTK CORS Network, i.e., TUSAGA-Aktif (CORS-TR) System can be found in Eren et. al. (2009); Mekik et al. (2011); Bakıcı and Mekik (2014) and Bakıcı (2015).

The main objective of this study is to assess accuracy performance of the ʻSingle Baseline RTKʼ operated by Çorum Local Municipality and the ʻNetwork RTKʼ operated by Republic of Turkey, General Directorate of Land Registry and Cadastre. For this purpose, a number of static experiments were conducted. The test procedures and obtained results with some recommendations are given.

In order to compare and assess the performance of the Single Baseline RTK and Network RTK, test measurements were carried out in City of Çorum district, Turkey on May 2017 (GPS Day of Year 145 and 147). As stated in previous chapter, Single Baseline RTK is affected by the distance dependent errors. In this study, it was also investigated how the accuracy would be affected depending on the distance from the used Single Baseline’s base (reference) station. For this purpose, 9 group of points (each group consist of 3 points) were established. The approximate distances from the base station (MUNI) of Single Baseline RTK to established points are:

The location of the established points including reference stations in the vicinity of the measurement area are shown on a map (Figure 1).

As a first step of the test measurements, the coordinates of the newly established points were determined in real-time with Network RTK approach. The coordinates of the same points were then determined again with Single Baseline RTK after cold-start of the receivers. During the survey, after fixed solutions obtained (mostly within less than 1 minute), 10 observation epochs were collected with1-second measurement interval and the average value of these 10 epochs was recorded as a point’s coordinate. In the test measurements, with VRS correction technique by observing all visible GPS and GLONASS satellites above 10-degree elevation mask.

The test measurements were carried out with multi-frequency and multi-constellation Trimble R10 GNSS receivers. Some prominent technical features of the receivers are given in Table 2. 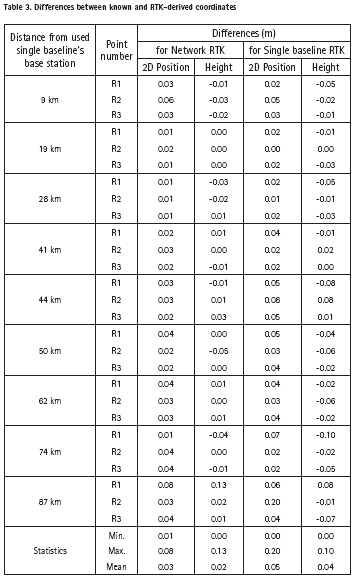 When the obtained results given in Figure 2 and 3 and Table 3 are examined, it can be seen that, both methods provide real-time positioning with cm to dm level of accuracy. However, maximum differences were obtained for both approaches in the group of measurements which were held at 87 km from the base station of the Single Baseline RTK (8 cm in position for Network RTK and 20 cm in position for Single Baseline RTK). This has been observed in only one of the 3 points surveyed. Thus, it can be stated that these big differences are obtained occasionally. 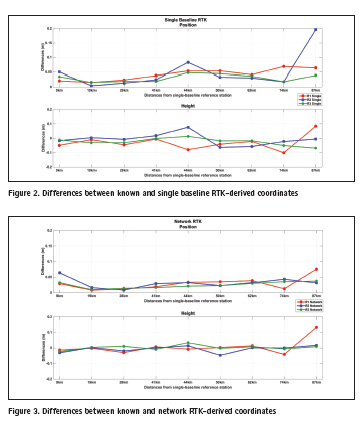 In general, the study shows that with the Network RTK approach, more homogeneous accuracy can be achieved (few cm level of accuracy in 2D position and height components with a few exceptions,). By using Single Baseline approach, the 2D position and height can be determined with less than dm level of accuracy in the measurements of all groups except the point group at 87 km distance away Single Baseline reference station.

In this study the performance of Single Baseline and Network RTK systems were evaluated and the attainable static accuracies were compared to each other. The results show that, although Network RTK performs more homogenous and more accurate results when compared to Single Baseline RTK, both approaches provide positioning with a few cm-level of accuracy when the fix solution is obtained.

In general, the results indicate that both Single Baseline and Network RTK-derived coordinates agree with the relative positioning solution at a few cm level of accuracy in both 2D position and height components. The RTK users make their continuous real-time positioning very reliable, fast (typically in few minutes), cost-effective within cm- to dm level of accuracy. Based on this study it can be concluded that, the Single Baseline or Network RTK approaches are an attractive alternative to conventional relative positioning method that require expensive and time-consuming field and office processes.

On the other hand, although RTK systems, especially Network RTK, are being used more widely in different projects each day due to their several advantages, need for base stations with enough density, need for a communication link (GSM, Wi-Fi, Internet, etc.) more complicated and more expensive equipment and infrastructure requirements, difficulties in continuous operation and labor, operating costs, etc., are the restricting factors in such systems.

This paper is an extended and reviewed version of the study that was presented at the XXVII International Symposium on Modern Technologies, Education and Professional Practice in Geodesy and Related Fields, Sofia, Bulgaria, November 9-10, 2017.

Prochniewicz, D., Szpunar, R. and Walo, J. (2017). A New Study of Describing the Reliability of GNSS Network RTK Positioning with the Use of Quality Indicators. Measurement Science and Technology, 28(1).