Our influence on sea level is negligible

Sea level rise is the chief pretext for alarm about Man’s influence on climate. Agencies such as the Intergovernmental Panel on Climate Change (IPCC, 1990-2013) have adopted an often unscientifically alarmist stance on the climate question, favouring extreme predictions both of future temperature change and of the consequences of global warming, especially sea-level rise. Those predictions have proven exaggerated.

In October 2005, for instance, a United Nations University press release said: “Amid predictions that by 2010 the world will need to cope with as many as 50 million people escaping the effects of creeping environmental deterioration, United Nations University experts say the international community urgently needs to define, recognize and extend support to this new category of ‘refugee’. … Such problems as sea-level rise, expanding deserts and catastrophic weather-induced flooding have already contributed to large permanent migrations and could eventually displace hundreds of millions.”

Earlier that year the Organization for Security and Cooperation in Europe had published a report by Professor Norman Myers, an environmentalist campaigner at Oxford University (Myers, 2005), predicting 50 million “climate refugees” by 2010. In 2007 the report was reproduced in the annual environmental atlas published by Le Monde Diplomatique (Bournay, 2007), with a map (Figure 1) that found its way on to the website of the UN Environment Program, one of the IPCC’s two sponsors.

In 2008 Srgjan Kerim, then president of the UN General Assembly, predicted 50-200 million environmental migrants by 2010. When this forecast failed (population increased in many of the areas said to be under climate stress), UNEP removed the map from its website. The same year James Hansen, the nowretired head of NASA’s Goddard Institute for Space Studies, told The Guardian, a UK newspaper, that sea level would rise by 75 m (almost 250 feet) as a result of manmade global warming (Hansen, 2008): 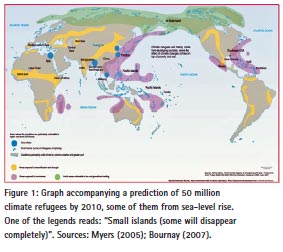 “If you leave us at 450ppm for long enough it will probably melt all the ice – that’s a sea rise of 75 metres. What we have found is that the target we have all been aiming for is a disaster – a guaranteed disaster.” Fortunately, science has now dismissed such extreme projections as mere rodomontade. For the sole mechanism by which the activities of Man might in theory raise sea level significantly is CO2-driven global warming. CO2 now occupies just 1/10,000 more of the atmosphere than in 1750.

Every month the index of global temperature change, based on the RSS satellite global lower-troposphere temperature-anomaly dataset, shows the longest period ending in the present showing a zero the least-squares linearregression trend. The latest index (Monckton of Brenchley, 2014) shows no warming during the 18 years 1 month September 1996 to September 2014 – more than half the satellite record.

The mean of the GISS, HadCRUT4, NCDC, RSS and UAH global-temperature datasets shows no warming for 13 years. Accordingly, any sea-level rise that may have occurred over the past decade or so is unlikely to have been much influenced by our greenhouse-gas emissions. Since there has been no global warming this millennium, any sea-level rise since 2000 must have been caused either by some natural factor (such as increased activity among the 3.5 million subsea volcanoes most of which have never been visited or monitored) or by what Professor Niklas Mörner, the world’s pre-eminent sealevel expert, has described as “personal calibrations” by the recordkeepers (Mörner, 2011). Professor Mörner has contributed almost 600 papers to the scientific literature in a professorial career spanning almost half a century. It is arguable that the “personal calibrations” that he describes are the chief cause both of uncertainty in the sea-level data and of apparent sea-level rise itself. 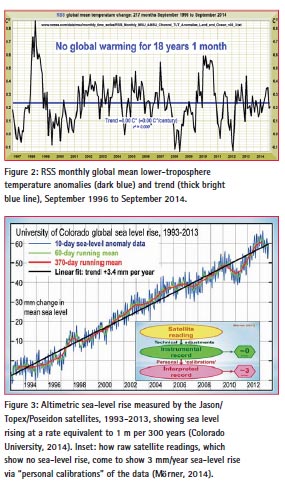 The “official” sea-level record (Colorado University, 2014) is based on altimetry from the Jason/Topex/ Poseidon satellite series. It purports to show a sea-level rise of 3.4 mm/ year, or approximately 1 ft/century (Figure 3). This rate of increase, stable throughout the period of satellite monitoring since 1993, is less alarming than the Myers and Hansen predictions. The “official” published rate of current sea-level rise, though it is well below the headline-grabbing extreme projections that have been made, may itself be an exaggeration. For tide gauges show sea level as having risen in recent decades at a rate of about 1.7 mm/year or 1 m in 600 years. That is half the satellite value. That lower rate shows no increase since 1900.

Two important independent satellite data series confirm the tide-gauge results and disagree with the “official” satellite series. First, unadjusted data from the Aviso ENVISAT satellite, a $3.5 bn flagship EU project which operated from 2004 till it inexplicably failed in April 2012, showed sea level rising at a rate equivalent to only 3.2 cm (1.3 inches) per century (Figure 5).

However, the ENVISAT record, like those of all other satellites, was subjected to (inevitably upward) revision arising from “personal calibrations” calculated to bring the data more closely into line with the “official” sea-level record (Figure 6). 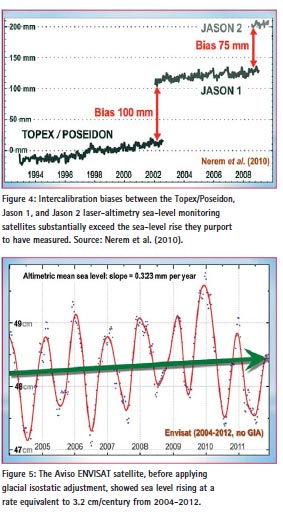 Secondly, the GRACE gravitationalanomaly satellites, perhaps the most accurate method of measuring sealevel change, also show little warming since 2001. However, again there were (inevitably upward) adjustments, this time to incorporate a “glacial isostatic adjustment” for the continuing slow rebound of the great land masses after the last Ice Age (Figure 7). 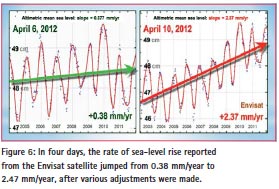 Even after “personal calibrations”, the rate of sea-level rise shown by the GRACE satellites accords with the tide-gauges but not with the “official” sea-level record.

Systemic sea-level rise is driven by melting land ice and thermosteric expansion. However, satellite altimetry shows that the volume of land-based ice in Antarctica has changed little in 35 years, for there has been little warming there, and that the Greenland ice mass increased substantially from 1993-2004 (Johannessen et al., 2005) and declined somewhat thereafter. Thermosteric expansion only occurs if the ocean warms. However, the 3500 automated ARGO bathythermograph buoys deployed throughout the world’s oceans show little increase in the heat content of the global ocean – one-sixth of what had been predicted (Figure 8). 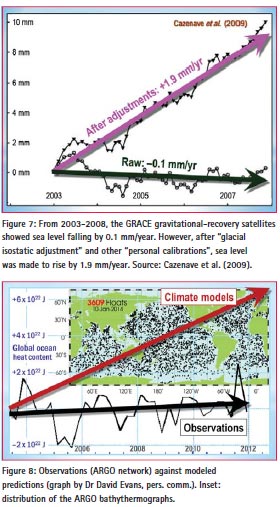 One frequently-publicized explanation for the near-total yet near-totally unpredicted absence of global warming recently is that the coupled ocean-atmosphere system has continued to accumulate heat as models had predicted, but that recently the ocean has removed the heat from the atmosphere by the ocean. Since globally the near-surface strata show far less warming than predicted, it is hypothesized that the “missing heat” has traveled to the little-measured benthic strata below 2000 m, whence it may emerge one day. The ocean “missing heat” theory is chiefly advocated by a single group in the United States (Meehl et al., 2011; Balmaseda et al., 2013; Trenberth et al., 2014a), who say that during periods without global warming the ocean above 300 m takes up significantly less heat, whereas the ocean below 300 m takes up significantly more, compared with periods when warming is occurring, and that more than ninetenths of any overall “thermal imbalance” in the climate is expressed in a rise in ocean heat content. On this theory, global warming has not stopped: it is continuing, but not in the atmosphere. Instead, it is harmlessly accumulating in the deep ocean, from which it may one day reemerge, somewhat in defiance of the laws of thermodynamics, which prohibit the transfer of heat from a colder body to a warmer body with which it is in contact.

To date, however, no empirical, theoretical or numerical method has plausibly specified a mechanism to explain either how the heat generated by anthropogenic greenhouse-gas enrichment of the atmosphere has reached the deep ocean without much altering the heat content of the intervening nearsurface strata or how the heat from the bottom of the ocean may re-emerge to perturb the near-surface climate conditions relevant to land-based life.

Even if heat were reaching the benthic strata without warming the nearsurface strata on the way, the transient near-surface response has proven insensitive to rising atmospheric CO2.

The mean depth of the global ocean is 3700 m. Wunsch & Heimbach (2014), implicitly questioning the “missing heat” group’s assertions, say the resolution of samples at various depths and the length of the record are insufficient either to permit reliable measurement of ocean heat content or monitoring of oceanic radiative fluxes:

“About 52% of the ocean lies below 2000 m and about 18% below 3600 m. By defining a volume as having been ‘probed’ if at least one CTD station existed within a roughly 60 x 60 km2 box in the interval 1992-2011…. [a] bout 1/3 (11% of total volume) of water below 2000 m was sampled… Of the [region] lying below 3600 m, about 17% was measured… [M]any papers assume no significant changes take place in the deep ocean over the historical period … “The history of exploration suggests, however, that blank places on the map have either been assumed to be without any interesting features and dropped from further discussion, or at the other extreme, filled with ‘dragons’ invoked to explain strange reports’ [de Jode, 1578]…”

Given the conflicting testimony as to the explanation for the long and unpredicted hiatus in global warming, it is impossible either to assign a single cause to the pause or to assume that the missing heat is in the deep ocean and will thus raise sea level at the high rates predicted by IPCC (2013).

On the evidence, global temperature has not risen at all this millennium, so that there is no reason to expect any sea-level rise above the established, small and harmless long-term rate. It is difficult to discern any manmade contribution to sea-level rise in the raw data. Only in the “official” record, and then only after “personal calibrations”, does faster sealevel rise appear, and only then at the moment of the changeover from tidegauge to satellite-altimetry measurement in 1993. The acceleration may well be a mere artefact of the altered method of measurement. The notion that the absence of global warming this millennium is attributable to the accumulation of heat in the ocean is not demonstrable by sufficiently-resolved measurements and is in any event hotly contested in the climate journals. It is likely that sea level will rise over the coming century or two at a rate no greater than the 1 m per 600 years observed by tide-gauges since 1900. That rate is slow enough to allow ready and inexpensive adaptation almost everywhere.

Lord Monckton was an expert reviewer for the IPCC’s Fifth Assessment Report (2013), and contributes papers on climate sensitivity and climate economics to the learned and specialist journals.

Mörner NA (2011) Sea Level Is Not Rising, Centre for Democracy and Independence, London.

Myers, N. (2005) Environmental refugees, an emergent security issue, 13th Economic Forum of the Organization for Security and Co-operation in Europe, Prague, May.