Whenever there is a need for continuous navigation, radio-technical systems are usually integrated with inertial navigation systems (INS) or dead-reckoning systems (DR). Due to large dimensions and power consumption, as well as high prices, INS systems have been traditionally applied in high-end or military applications. Recently an unprecedented decrease of all the above mentioned factors have been witnessed, making inertial navigation suitable for a wider set of applications. However, the dead-reckoning method is still the preferred choice in low-cost land navigation systems.

Dead Reckoning (DR) allows to determine the current position of a vehicle using heading and velocity measurements. One of the data streams needed for DR can be provided by the Heading Reference System (HRS). The HRS provides heading estimates, which allow DR to calculate the direction of a vehicle displacement and, along with velocity information, to predict the current position of the vehicle.

This article presents a project and hardware design of HRS system, utilizing an electronic compass with tilt sensors and a gyro. These additional sensors are used to correct the compass measurements. The main task of the developed system is to determine the current heading on the almost continuous basis and with as high accuracy as possible.

The main subsystem of the designed HRS is an electronic compass module. It allows heading estimation, based on the Earth’s magnetic field measurements. 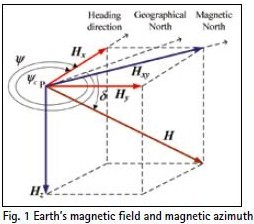 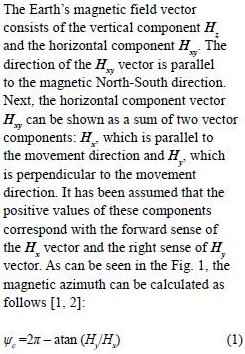 When the compass module is tilted, the measured components do not equal horizontal components of the Earth’s magnetic field [5, 6]. Because of that, the angle determined with the use of the equation (1) is sensitive to the tilt of the compass. The influence of the tilt angle τ and the inclination angle δ (see Fig. 1) on the azimuth error are shown in Fig. 2. 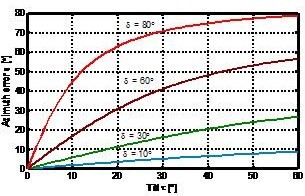 Fig. 2 Influence of tilt and inclination on azimuth

Electronic tilt compensation has been applied to reduce compass tilt errors in the designed HRS. Fig. 3 shows pitch and roll angles of the electronic compass module [2, 4]. 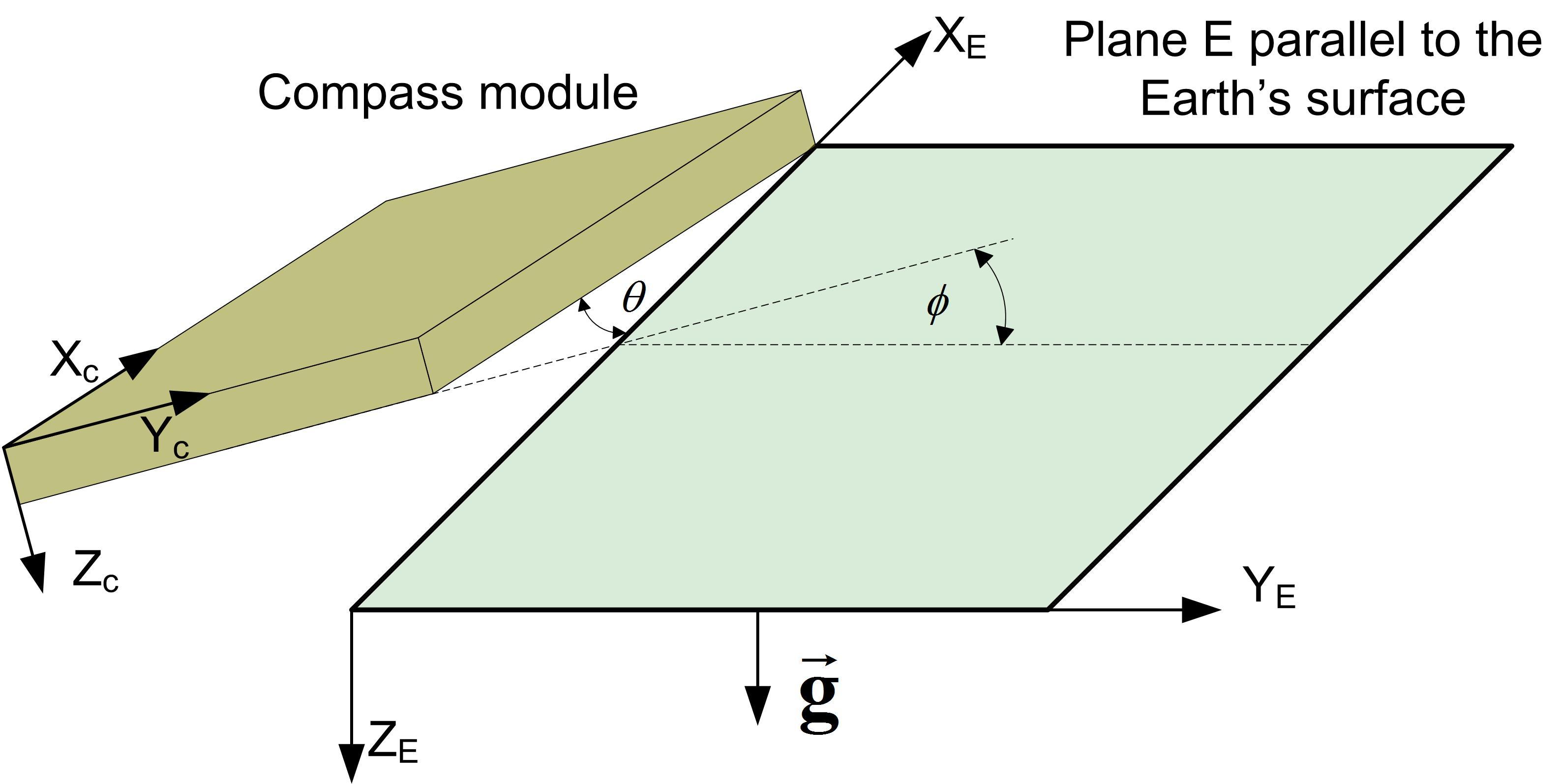 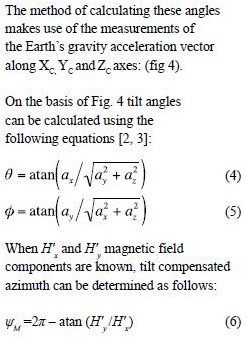 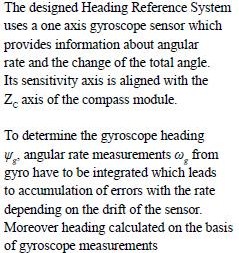 system [5]. There is also another simple method of correction, which assumes that the overall effect of deflections can be compensated by multiplying angular velocity measurements from gyro by a constant coefficient, greater than one [5].

The Heading Reference System uses the gyroscope data and the compass data to determine current heading [4, 5, 6]. The design utilizes a Kalman filter (KF) [6] to integrate the measurement data and estimate gyroscope errors. The results of estimation are subsequently used to calculate the estimated heading . The block diagram of the implemented integration algorithm is shown in Fig. 5. 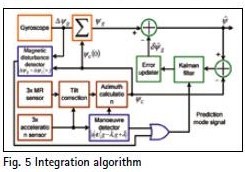 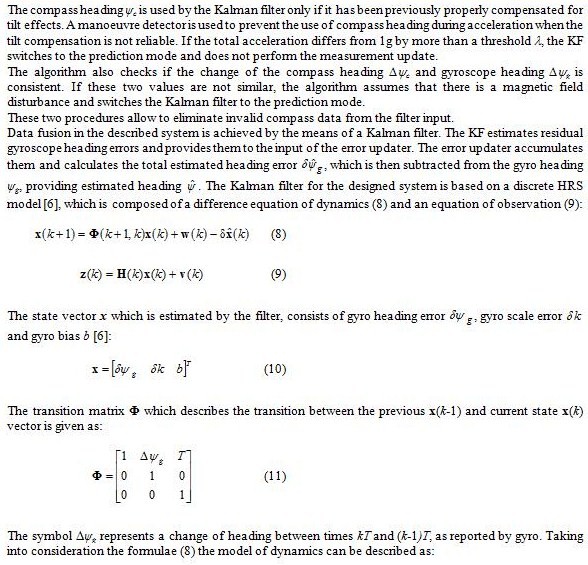 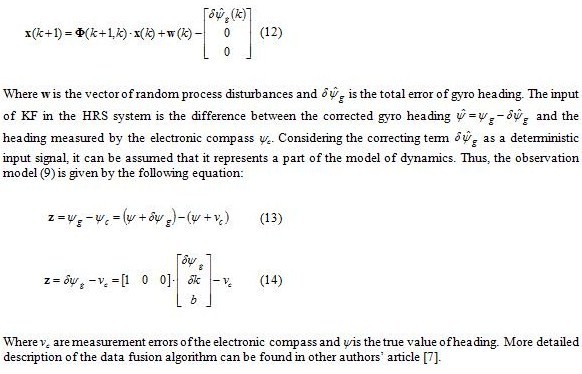 During the research work, a hardware implementation of the described Heading Reference System has been developed. The main task of the system is to determine the current heading on the almost continuous basis and with possibly high accuracy. It was assumed that the system should consist of low cost elements, have small dimensions, and battery supply. The block diagram of the prototype is shown in Fig. 6. The HRS is controlled by an Atmel AVR microcontroller which performs initialization, measurement and calibration routines and executes integration algorithm.

The estimated heading is displayed on a graphical LCD module with additional information such as pitch and roll angles, current mode of filter operation (only prediction or normal work) and information about detected magnetic field disturbances and manoeuvres. Fig. 7 shows the hardware of the designed Heading Reference System. 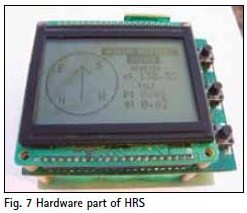 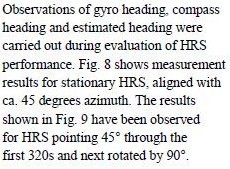 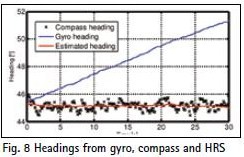 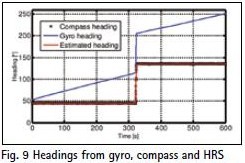 Simple statistics for the stationary period of time for the second testing scenario (Fig. 9) have been shown in Table 1.

As can be seen in Figs. 8-9, the gyro heading tends to almost linearly increase because of cumulative gyro errors. The compass heading has long term stability, but it is noisy. The implemented integration algorithm enables estimation of heading, taking into account short term gyro accuracy and long term compass stability. As a result fast response of the system has been preserved and noise of the compass heading have been significantly reduced.