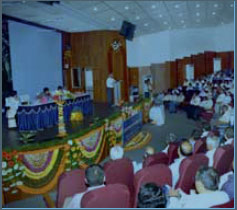 The NRSC User Interaction Workshop 2010 organised by the National remote Sensing Centre (NRSC), Department of Space, India was an opportunity to inform the Geo spatial user community regarding the various developments that have happened in terms of Products and services available to them and also for the user community to share their experiences.

G. Balachandran, Additional Secretary, Department of Space, spoke about the achievements in remote sensing by India, in his inaugural address. Oceansat products and a document on Water Resource Assessment by NRSC were released and the exhibition on Space Applications for Planet Earth, Man and Moon was also inaugurated.

Five technical sessions and by the industry were held. The session on Oceansat Sensors dealt with the technical specifications, data acquisition methodologies and the features of the sensors. The session on future Earth Observation Missions and Applications gave an overview of Resourcesat-2, microwave sensors in India and the future Cartosat missions. Discussions were also held on Climate Change and the SARAL mission. The session on High Resolution Data Utilisation focussed on the applications using such data and the growing need for high resolution data. ISRO’s geoportal – Bhuvan – was also showcased.

Dr. R Nagaraja of NRSC Data Centre gave an update on the data products and services. He also talked about the customer feedback received and the action being taken on it. He highlighted the efforts being taken by NRSC to promote the data and the status of data acquisition. Other discussions included those on capacity building by Indian Institute of Remote Sensing and concerns of the user community regarding the process of data access.

In the Industry session, the presentations by Digital Globe, GeoEye and Scanpoint Gomatics Limited highlighted their offerings. www.nrsc.gov.in