Caserta, Italian Ministry
of Cultural Heritage and Activities and Tourism

This paper illustrates the combination of non-invasive surveying methodologies for the modeling of an old masonry aqueduct bridge, the “Ponti della Valle”, as a support to its structural analysis. The photogrammetric technique of Structure for Motion is used to process photograms taken from specified positions; the created dense point cloud is then edited in order to meet the geometry visualization’s needs prescribed by the engineering team of the monument. Finally, some simple visualization and interrogation techniques are used to evidence planarity, verticality, co-planarity, shape and dimensions of the structure’s south façade.

Studying the past for
a better future

Cultural heritage is present everywhere. Its structural control, documentation and This paper illustrates the combination of non-invasive surveying methodologies for the modeling of an old masonry aqueduct bridge, the “Ponti della Valle”, as a support to its structural analysis. The photogrammetric technique of Structure for Motion is used to process photograms taken from specified positions; the created dense point cloud is then edited in order to meet the geometry visualization’s needs prescribed by the engineering team of SURVEYING conservation is one of human’s main duties (UNESCO 2013). In this contest, researchers continually are working to identify methodologies that guarantee accurate information regarding shape, state and dimensions, noninvasive, fast as possible and secure for the surveying operators. These techniques often integrate even multidisciplinary sciences like geomatics, information technology statistics and machine learning in order to entail results needed in good time manner. Within the methodology presented in this paper and according to the criteria and rules of the structural analysis, it is possible achieve a significate support in order to properly conserve structural heritage, and to estimate situations, sometimes critical, as well as eventual planning and maintenance efforts and costs, control and restoration.

Vanvitelli’s masonry aqueduct is located in the central Italy, near Caserta city, it has been constructed during in the second mid of the 17th century by Luigi Vanvitelli under the orders of King Charles III of Spain (figures 1a and 1b). It is considered a structure of considerable architectonical merit both because it belongs to the monumental complex of the Caserta’s royal palace and due to its massive and technologically advanced for the time characteristics. The bridge is at the moment perfectly conserved, has a length of 529 meters, made of three rows of arches that reach a height of 55 meters at its highest part. The structure was nominated “World Heritage Site” by UNESCO in 1997. 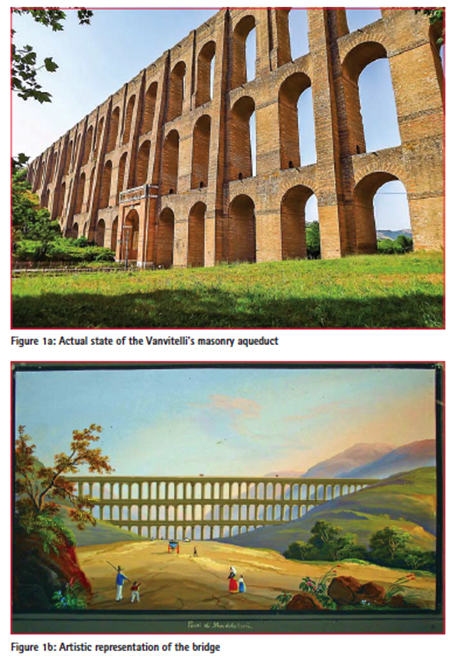 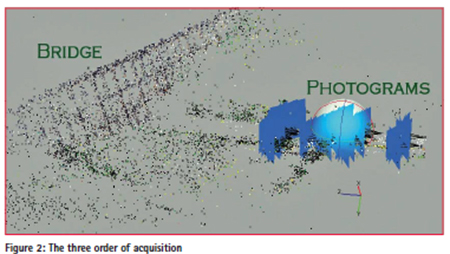 The choice of the best surveying approach

For this case study some serious constraints connected with the accessibility of the site and impossibility to install invasive surveying pillars did not permit the use of traditional surveying routines like total stations. Laser scanning was rejected during the evaluation of the various techniques mainly because in short distances there was a very steep, almost vertical visually while good visual was too far for laser scanning and among too many obstacles. Terrestrial photogrammetry in this context has been considered the best approach, absolutely noninvasive for the structure, secure as did not consider interaction between the structure and any operator, accurate enough as only qualitative considerations were needed and fast enough to respond the monument’s management needs (Guidi et al 2004). This choice was further supported by recent bibliography proving the far by now consolidated combination between photogrammetry and Cultural Heritage (Bay et al 2008, ). Then, both commercial and open source software that proved a significant success in the field of threedimensional surveying was evaluated in order to define the solution that best meets this case’s needs (Westoby MJ 2012, Barazzetti et al 2011, Lisein et al 2013). Within this evaluation Agisoft Photoscan, representing the Structure for Motion algorithms, has been chosen for its analytical robustness, its relatively easy application, the reasonable elaboration times and the most important, the quality of the results demonstrated in various pushed works.

One of the most important phases in this work has been the accurate preparation of the photogrammetric surveying. During this activity, the relation between best distance from the object, focal length, ground sampling distance (GSD) and sensor’s resolution permitted identify the best positions needed to achieve an adequate around a centimeter a priori precision. With this information three parallel acquisitions have been made all of them using vertical overlapping of at least 60% (figure 2) (Kraus, K., 2007).

Immediately after the image acquisition a visual inspection of al images was needed in order to decide which of them were able to satisfy the quality criteria and undergo the data processing. Finally, 39 photos where elaborated for the south facade undergoing the wellknown routine of photo alignment, sparse cloud generation, dense cloud generation and texturing. Even if in this case only the dense point cloud was needed the final textured result is shown in figure 3. Around 25 ground control points have been surveyed in NRTK mode have been surveyed mainly in visible parts to the top of the bridge in order to add robustness and prevent deformative behavior of the whole model. 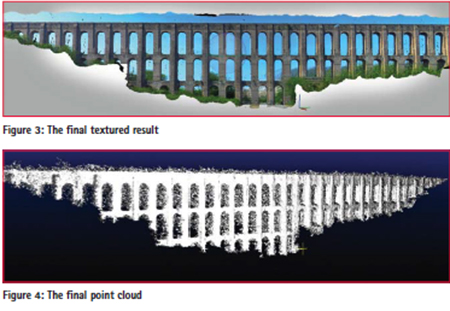 The final point cloud has been exported having 5 million points (figure 4). The point cloud has then imported for ulterior editing in Cloud Compare open source software. Using a volume point density, the point cloud has been decimated without lowing the information level to one million of points having an average distance of 1 cm, more than enough for the scope of this project. The registered and georeferenced global point cloud, has then been rototranslated in order to orientate one of its axis parallel the bridges façade. Thus, the obtained modified coordinates have been introduced in a surface plotting software in order to represent its shape and morphology using color scales that led to an easy interpretation by the structural department. 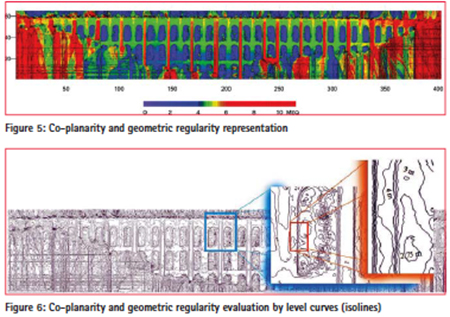 The final product of this analysis is presented in figure 5. In this elaborate, color scale has been used in order represent the level of each area evidencing co-planarity, verticality and the geometry’s overall regularity; thus, red colors represent zone more exposed with respect to blue areas that show the reference plane positioned to the bridge’s axis of symmetry. In the same way, a contouring algorithm that permitted a numerical lever curves has been used in order to permit local comparison of the various parts, this elaborate is shown in figure 6.

An additional quite useful data needed for the structural analysis regards the estimation of the vertical sections of the façade (figure 8). For this elaborate, the dance, decimated point cloud has been interrogated, sectioning it with a reference plane characterized by a 20 cm width, positioned vertically and in a normal direction with respect to the façade. All points belonging to the overlapping space between the reference plane and the façade’s point cloud (vertical sections or sub clouds) have been elaborated in in order to plot them in three dimension and to calculate trend lines. In this way 28 sections have been obtained and plotted as shown in figure 7 where the displacement are in “meters equivalent”. This methodological approach must be considered as a valid tool for the structural department experts and consultants, whose experience is irreplaceable. 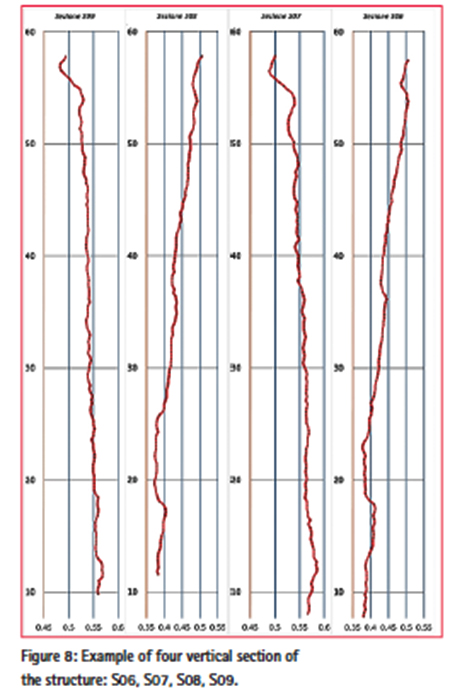 The described methodology represents a synthesis of a simple but quite efficient synergy between more processing algorithms with photogrammetry. It also evidences how new technologies can represent a valid support to the structural analysis of masonry monumental facades, using a riskfree surveying strategy, absolutely noninvasive for the monument, of relatively fast application and economically convenient. Great part of the elaboration procedure has been done using open-source software while the photogrammetric survey has been executed using a commercial reflex camera. Among the proven advantages of the chosen methodology, the adequate resolution, precision and operational simplify have to be mentioned confirming it as a quite efficient way to obtain three-dimensional modelling and analysis of monumental facades.

The methodology can be further improved with the integration of machine learning algorithms in order to enhance efficiency and accuracy to obtain ulterior results in, at least, two applications. The first one regards the detection, classification and codification of the structural behavior of a site using a not supervised neural network. The second one is the implementation of genetic algorithms in order to significantly improve mathematical procedures like the point cloud filtering, editing and interpolation, and thus, to achieve higher quality in all results.